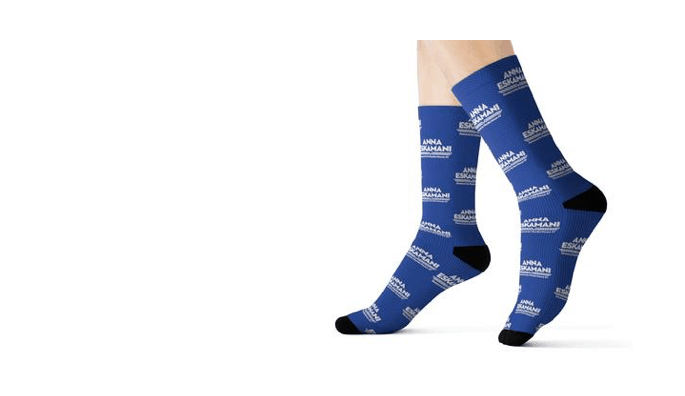 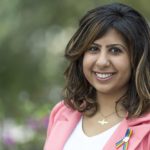 Yes, the sale of campaign ball caps, T-shirts, coffee mugs and socks is helping Democratic state Rep. Anna Eskamani‘s re-election campaign; but no, it’s not a major factor, at least not yet.

“The majority of our donations come from folks just making a contribution because they support our work,” Eskamani said.

Eskamani, who opened a campaign merchandise page off her re-election campaign website last fall, said the sales of campaign souvenirs have generated $461.80 for her coffers so far. That is even though she temporarily shut down the Anna Eskamani Shop during the Florida Legislative Session and really has not resumed sales since.

Without merchandise sales, Eskamani still reported raising $10,638 for her official campaign fund in May, for her re-election bid in Florida House District 48, representing northern and central Orange County. That included no merchandise sales.

That month total is below the pace Eskamani set in the early months of her 2018 campaign, when, as a first-time candidate, she raised $135,000 in her first four months, and wound up raising $451,000 for the full campaign. Still, her recent haul was tops among Central Florida House candidates in May, heading toward the 2020 election. That came, she said, even though she is not planning to start fundraising efforts in earnest until July.

“We’re just getting started,” she said.

Consequently, the merchandise sales, which she largely pioneered in Florida for state legislative races when she rolled it out late last fall after her election, is yet to be fully tested. The $461 she said her campaign cleared comes after the retail prices pay the promotional company for the various costs of the merchandise created with her campaign logo and after sales taxes.

The merchandise numbers do not show up easily in campaign finance reports filed with the Florida Division of Elections. The net amount the campaign receives from each customer, essentially the profit, shows up as a contribution from the individual, often as an odd figure for a donation, such as $2.08, or $7.77. Production costs, taxes, and other expenses are handled and absorbed by the promotional company. So the only expenses that show up in Eskamani’s campaign account are processing fees.

The most popular items so far have been the T-shirts and the socks.

Eskamani, of Orlando, entered June having raised a total of $20,655 for her campaign, with about $20,000 of that left in the bank. She also has an independent political committee, People Power for Florida, which picked up $200 in May and entered June with about $8,000 in the bank.

She is one of 10 Central Florida candidates for the Florida House of Representatives who do not yet have any competition. Other than her, none of the others raised even $4,000 in May, and many didn’t raise any campaign cash.

Republican state Rep. Scott Plakon of Longwood picked up $3,750 in May and has about $7,000 in the bank for his re-election bid in House District 29 in north-central Seminole County.

Democratic state Rep. Kamia Brown of Ocoee reported no money raised in May for her re-election bid in House District 45, in northwestern Orange County. She entered June with just under $7,000 in the bank.

Democrat Cynthia Harris of Orlando, running for the House District 46 seat being vacated by term-limited Democratic state Rep. Bruce Antone of Orlando, picked up $200 in May. She has about $300 in the bank.

Democratic state Rep. Amy Mercado of Orlando received $939 in donations in May, giving her about $4,000 in cash at the end of the month for her re-election bid in House District 48 in southeastern Orange County.

Democratic state Rep. Carlos Guillermo Smith of Orlando did not raise any money for a re-election campaign in House District 49, in northeast Orange County and pretty much spent what he had. So he entered May with just a couple hundred dollars in his campaign fund.

Republican state Rep. Rene Plasencia of Orlando did not raise any money in May for his re-election bid in House District 50 in eastern Orange County and northwestern Brevard County. He has more than $32,000 in the bank.

Republican state Rep. Tyler Sirois of Merritt Island did not raise any money in May for his re-election bid in House District 51 in central Brevard County. He had $8,400 in the bank at the end of May.

Republican state Rep. Thad Altman of Indialantic did not raise any money in May for his re-election bid in House District 52 in northeastern Brevard County. He has about $5,200 in cash.

Republican state Rep. Randy Fine of Brevard County did not raise any money in May for his re-election bid in House District 53 in southern Brevard County. He has more than $94,000 in his campaign account.