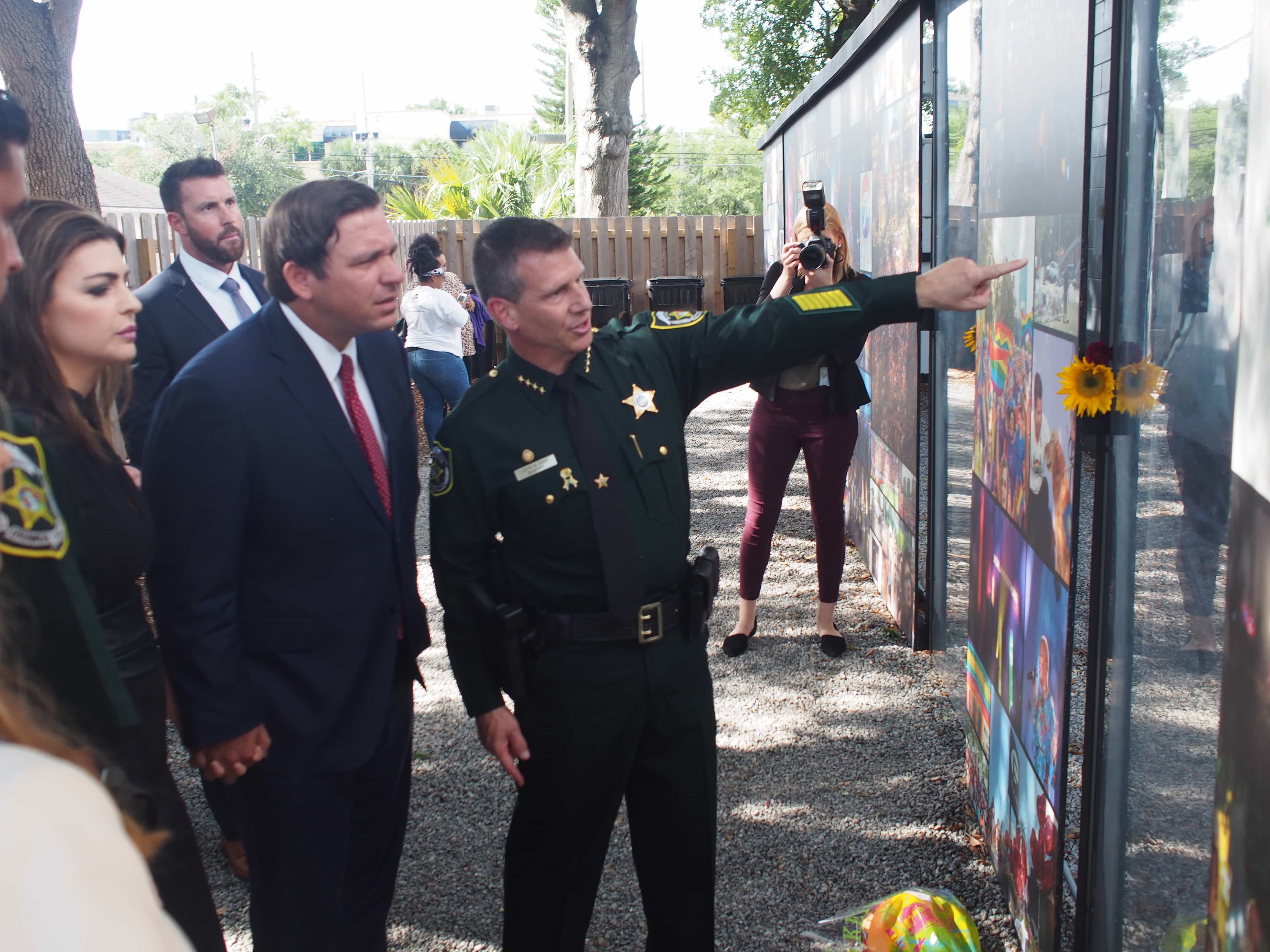 The Governor then pledged full support for the planned Pulse Memorial and Museum.

The DeSantises arrived a couple of hours before the Pulse commemorative ceremonies were set to begin, toured the Pulse Interim Memorial with Pulse Owner Barbara Poma and several local officials, laid flowers, and expressed sorrow for the 49 people murdered there and 53 who were wounded on June 12, 2016.

They toured the long memory walls, which include hundreds of photographs depicting how the tragedy affected the community, and hundreds of tributes to individual victims. Along the way, Poma and Orange County Sheriff John Mina, who was Orlando Police Chief in 2016, told them the Pulse story, describing the scene of June 12, 2016, and the community’s response since.

“This ranks very near the top of the worst things that have ever happened to our state,” Ron DeSantis told Poma, Mina, and Orange County Mayor Jerry Demings, who was Sheriff in 2016.

They also met briefly with two Democratic lawmakers and others who’ve been battling for state funding and recognition for Pulse.

The Governor pledged to state Reps. Carlos Guillermo Smith and Anna Eskamani, as well as to Equality Florida official Brandon Wolf, a Pulse survivor, that he would fully support state funding for Pulse, starting with the $500,000 in the 2020 Florida budget coming to his desk.

He repeated the pledge to Orange County School Board Chair Teresa Jacobs. She had been Orange County Mayor in 2016, and had led the county to put up the first $10 million toward the $45 million the onePULSE Foundation is raising for the permanent memorial and museum.

To Jacobs he said, “You have my support not just for what’s in the budget, for the creation of the memorial … The state will be committed. I think it’s important. We’ve got to do it.”

The Governor did not speak to media during the visit.

He did not discuss his Pulse remembrance proclamation that he first issued Tuesday then had to re-issue, corrected, Wednesday, after Eskamani, Wolf and others criticized the first for not mentioning the LGBTQ and Hispanic communities devastated in the massacre at the gay nightclub. Nor did he discuss policy differences he has with Eskamani and Smith, notably their push for his support for state-required equal rights for gay people.

After his quick exit, Jacobs an Eskamani expressed some appreciation for what the Governor had said about his support for Pulse and for the planned memorial and museum.

“He said that, and he said that’s the beginning,” Jacobs said. “Here locally we got $10 million. He said he’s committed. He’s committed to what’s in the budget, and that that’s a start. I know we are going to get the money. One way or another.”

“He’s very committed to supporting the memorial and museum,” Eskamani said. “And I look forward to conversations around policy to make life better for LGBT people in our state.”

The Governor and First Lady began their visit by signing the post that holds the iconic Pulse nightclub street sign and bears messages from hundreds of visitors.

The Governor wrote: “Florida will always remember these precious lives.”

The First Lady wrote: “May we never forget.”