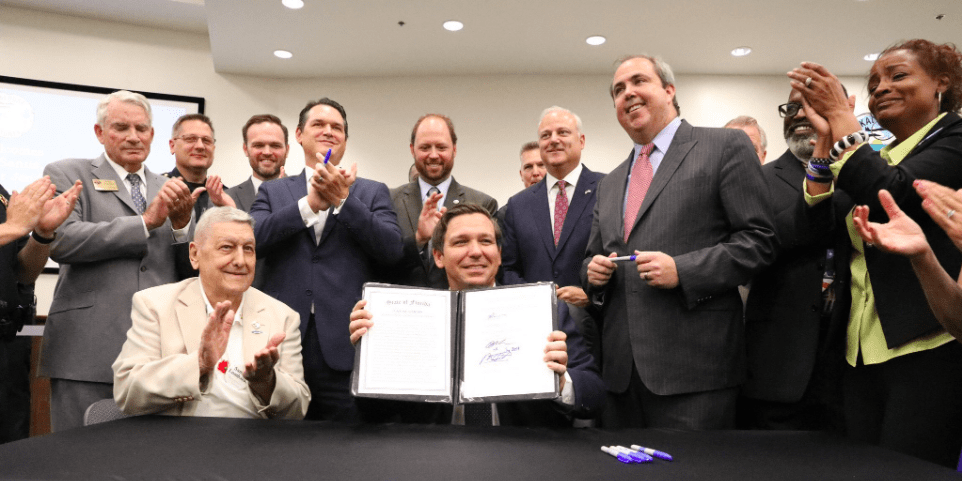 “It almost came to a standstill."

Gov. Ron DeSantis on Friday signed a bill passed earlier this year that requires local governments to work with the feds to enforce immigration laws.

The legislation began as an anti-“sanctuary cities” measure, though critics noted officially there were no sanctuary cities in Florida to begin with.

The immigration issue presented a flashpoint throughout the 2019 Legislative Session, with protesters at committee meetings and Democrats doing everything possible to kill the bill, though numbers ultimately were not on their side.

The Florida Democratic Party and immigration organizations lambasted the measure once again on Friday, with one group even saying it will “terrorize” immigrant families.

But DeSantis was greeted with nothing but resounding cheers at the Okaloosa County Commission building, a world away from the controversy over the bill.

The Governor noted that when he was campaigning, he promised to “deliver on promises.”

“One of the promises (was) to do whatever we can on the state level to fight illegal immigration, specifically sanctuary cities,” DeSantis said.

“When I sign this bill,” he added, “… in Florida that will not happen.”

“We ran on this,” DeSantis said. “A lot of the stuff we ran on, people couldn’t get done … we got it done.”

“This bill is simple … it’s our state’s policy that we work with the federal government,” DeSantis said, saying sanctuary cities “defy federal law.”

“We’re going to cooperate to ensure the safety of our cities and communities,” DeSantis vowed.

The bill marshals 287(g) agreements, if a non-citizen is arrested. Those agreements offer avenues for federal reimbursement for detainment.

Gaetz, in remarks that touched on a number of topics over many minutes, noted the huge local interest in the bill signing that required the location to be moved to the commission building. He lauded DeSantis for being the “boldest, most popular governor in America,” as well as supporting law enforcement and public safety.

Gaetz noted that 5,000 illegal immigrants show up at the southern border everyday, and they are dispersed by a “catch and release” policy.

“They get a plane ticket anywhere in the country,” Gaetz said to groans. “And you pay for it!”

Gruters said this was a “historic day.”

“Florida is at the forefront of the entire country when it comes to passing meaningful legislation,” Gruters said. “This truly was a team effort … 244 amendments … had to pass it twice on the Senate floor and three times on the House floor.”

“It almost came to a standstill,” Gruters said. “Then the Governor got involved … at the end, when it really mattered, he engaged.”

“We passed the strongest ban on sanctuary cities in the entire country,” Gruters added, noting the bill is “about criminal illegal aliens who have broken other laws.”

Rep. Byrd said the bill was “about recognizing American citizenship.”

“We kept hearing opponents of the bill talk about illegal aliens,” Byrd said.

He added that the bill was about putting citizens first.