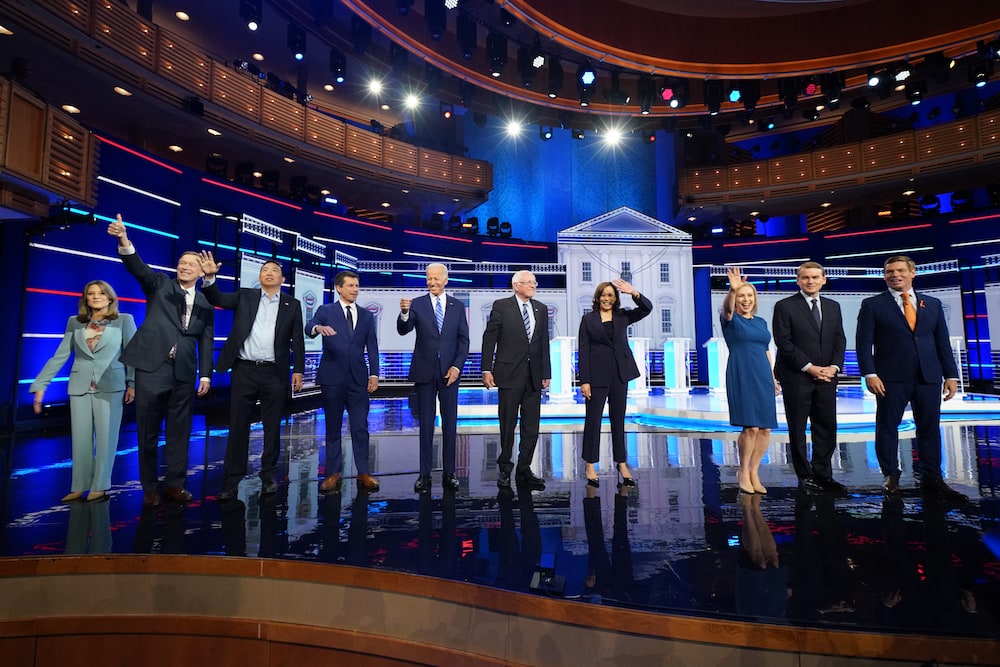 Almost immediately, it became clear the second night of the first Democratic presidential candidates’ debate would be a more raucous affair.

In particular, former Vice President Joe Biden, the Florida frontrunner, took a drubbing from a number of competitors sharing the stage:

— California U.S. Rep. Eric Swalwell called on Biden to hand a torch to a new generation.

— Vermont U.S. Sen. Bernie Sanders questioned Biden’s vote for the Iraq war and contrasted it with his own opposition.

Biden defended himself largely by citing successes under President Barack Obama, frequently citing the “Obama-Biden” administration. And he demanded Democrats focus on the goal of unseating the current Republican president.

“The first thing to do is defeat Donald Trump,” Biden said.

Many candidates cited their own personal connections to issues in stressing their commitment to signature issues.

Swalwell discussed being a parent who had to memorize what his children wore when dropping them off to school in case he had to identify them after a shooting.

South Bend, Indiana Mayor Pete Buttigieg discussed how his same-sex marriage depended on a single vote on the Supreme Court.

But one of the most powerful moments came when Harris discussed growing up in Berkeley decades after the Brown v. Board of Education decision. She presented that experience in contrast to Biden, who recently cited his work with segregationists in the U.S. Senate.

“It was hurtful to hear you talk about the reputations of two U.S. senators who built their reputations and careers on the segregation of races in this country,” Harris said.

Biden shot back, calling Harris’ characterization of his work a “mischaracterization across the board.” His defense of his early work in the Senate and specifically fighting busing edicts from the Department of Education centered around arguments of state and local rights.

Despite the tense exchange with Biden, Harris’ biggest moment of the night may have come earlier, as crosstalk about health care policy drowned out conversation. As moderators offered Harris time, she called for civility on the stage.

“America doesn’t want to witness a food fight,” she said. “They want to know how we are going to put food on their table.”

Former Colorado Gov. John Hickenlooper stressed throughout the debate that Democrats must be careful to eschew the label of socialism.

“The bottom line is, if we don’t clearly define we are not socialist, Republicans will come at us every way they can and call us socialists,” Hickenlooper said. “If we turn toward socialism, we run the risk of reelecting the worst President in American history.”

That seemed most pointed at Sanders, a self-described Democratic Socialist. But the Vermont politician said Democrats can’t let Republicans or Trump define their policies or terminologies.

On the subject of health care, he and Harris were the only ones on stage arguing to get rid of private insurance and switch to a government-run, or single-payer, system. They joined New York Mayor Bill de Blasio and Massachusetts U.S. Sen. Elizabeth Warren who took the same position Wednesday night.

“I find it hard to believe that every other major country, including my neighbor 50 miles north in Canada, can provide health care to every man, woman and child,” he said, “and in most cases spending 50 percent less per capita than what we are spending.”

Biden largely dodged the issue. As moderator Jose Diaz-Balart pressed the matter, Biden would not say he would decriminalize anyone whose only offense was entering the country illegal. “That person should not be the focus of deportation,” he said.

Moderator Rachel Maddow pressed Buttigieg on race relations in his community. There, NAACP leaders have expressed outrage over the death of a black man, Eric Logan, killed by police. The officer had a body camera but it was not turned on at the time.

Buttigieg would not take sides until an investigation concluded but took responsibility for the death on his watch.

“I couldn’t get it done, and my community is in anguish now,” he said. “It’s a mess and we’re hurting. I could walk through all the things we have done as community, de-escalation training, but it didn’t save the life of Eric Logan, and when I look into his mother’s eyes, I have to face that fact.”

Swalwell said Buttgieg needed to fire the police chief, an action he has not taken. Hickenlooper questioned how any leader five years after Ferguson could still have so little oversight over police.

But all candidates agreed the major focus of any President who defeats Trump next year must be undoing damage of the current administration.

“One of the worst things President Trump has done to our country is torn apart the moral fabric of what we are,” she said.

The senator, one of three women on the stage Thursday night, also sold herself as the staunchest defender of women’s reproductive rights in the race.

“When we beat President Trump and (Senate Majority Leader) Mitch McConnell walks into the Oval Office, god forbid, to do negotiations,” Gillibrand said, “who do you want behind that desk to fight for women’s rights?”

For Yang, that was the need for a universal basic income, a $1,000-per-month minimum income for all Americans. He said the cost could be covered by closing corporate tax loopholes.

“It’s only difficult to do with companies like Amazon paying zero in taxes when they are closing 30 percent of our stores,” Yang said.

Williamson said the nation needs systemic changes and a federal government getting tough with interests like pharmaceuticals. But she suggested candidates focused on detailed action plans will miss the boat with voters.

“If you think you can beat Donald Trump by having plans, you have another think coming,” she said. “He won simply by saying Make America Great Again.”