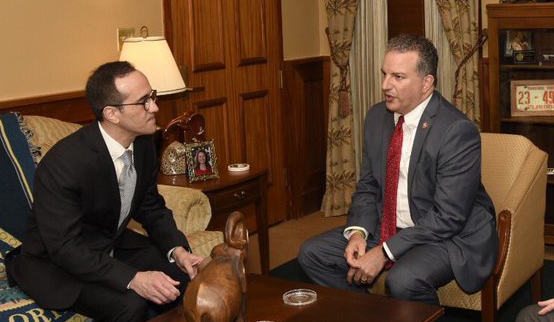 "Some of the allegations ... may constitute a criminal violation."

In a Thursday morning email, Peter Penrod — general counsel for Patronis’ Department of Financial Services (DFS) — advised the CFO about a request by Rubin for whistleblower status under state law.

Other emails, produced as part of a public records request, show that Rubin still had not turned in his state-issued computer and cellphone as of Thursday. He had been on the job for only five months.

Rubin, former head of the state’s Office of Financial Regulation (OFR), was terminated last month in the wake of allegations of sexual harassment and inappropriate comments in the workplace.

Before that, Rubin had applied for whistleblower status, claiming he was being retaliated against by CFO Patronis for not hiring the friend of a favored lobbyist.

Penrod’s email is redacted but a person inside the department who is not authorized to speak with news media confirmed the subject is Rubin. A request for comment was sent Friday evening to his attorney, Michael Tein of Miami.

Tein, who was traveling over the weekend, responded Monday: “It smells Nixonian that his office would release a self-serving email, supposedly as a ‘public record,’ the day after it was written — which threatens to put me in jail for filing a lawsuit investigating his ethics,” suggesting Patronis was really targeting him too.

“To summarize, the IG determined that the allegations were unfounded,” Penrod wrote, and that Rubin “intended to manufacture a false narrative about DFS.”

The attorney also said in the email he “believe(s) that some of the allegations are so patently false that they even may constitute a criminal violation,” referring to statutes against perjury, making false reports and giving false information to law enforcement, and making false official statements.

“I will review relevant law to determine whether we have a responsibility to disclose these (potential) violations of law to the proper authorities,” Penrod wrote.

Patronis replied to Penrod’s email about two minutes later, saying only, “Thank you.”

Tein dropped off a letter requesting whistleblower protection for Rubin two days before Cabinet aides met the Wednesday before the July 25 Cabinet meeting when Patronis offered a motion to fire Rubin.

Tein’s letter notes that Patronis’ attempt to include Rubin’s termination on the agenda came after Rubin filed whistleblower complaints with Perry and the state’s chief inspector general, Melinda Miguel.

“Thus, Mr. Patronis’ recent demand to terminate Rubin’s employment at the next Cabinet meeting is unlawful retaliation for Rubin’s complaints, which are absolutely protected under Florida’s Whistleblower Act,” the letter from Tein says.

Patronis suspended Rubin from his post on May 10, after an employee accused the OFR head of harassment.

Rubin’s firing ended a brief saga that began with accusations of sexual harassment. That was followed by underlings’ complaints of strange and inappropriate comments in the workplace, including asking an employee whether that worker’s dog watched that person and their spouse have sex.

The Office regulates banks, credit unions, other financial institutions, finance companies, and the securities industry. DeSantis has said a nationwide search will be held for Rubin’s replacement.

Rubin was once an enforcement attorney for the federal Consumer Financial Protection Bureau and worked at the U.S. Securities and Exchange Commission (SEC) but had been a “self-employed freelance writer” for over three years before taking the OFR job.

Rubin’s effect on state government is far from over. The state employee who filed the complaint against him asked Moody and the Florida Department of Law Enforcement to investigate Patronis for his handling of the complaint.

Patronis released a redacted version of that complaint to news media and publicly stated the sexual harassment complaint included “troubling allegations.” The employee’s attorney, Tiffany Cruz of Tallahassee, said: “There can be no dispute that the release of this complaint, even redacted, is a knowing and willful violation of Florida Statutes and should be investigated.”

The crux of the complaint was that Rubin took her to lunch April 30 and to his nearby downtown condo to see recent renovations. Inside, Rubin told the employee to remove her shoes so as not to track dust inside. Rubin also removed his shoes before they viewed the condo.

The employee said she felt “awkward” and “uncomfortable.” After that trip, the employee started to avoid Rubin and was moved to a different job, at her request.

Moreover, the attorney representing lawyer Kim Grippa, the “politically connected” job applicant that Rubin refused to consider, complained in a Thursday letter that his public records request was being held up because Rubin had yet to surrender his state-issued phone and computer so they can be searched.

(Rubin said she wasn’t qualified to work at OFR, either as his general counsel or in any other position. Grippa, a senior professor in the School of Business Administration at Daytona State College, said she had a bad interview with Rubin and wouldn’t have wanted to work for him anyway.)

Ryan Andrews, her Tallahassee-based attorney, told OFR General Counsel Tony Cammarata that Rubin was causing an “impermissible delay” by holding on to the equipment.

“I note that my client is seeking information that apparently many other individuals and news outlets are seeking from OFR,” Andrews wrote. “Even though Ronald Rubin was fired, my client wants to get to the bottom of what happened and seeks answers to questions that she has never known the answer to.”

He declined to comment on the letter Friday evening.

And meantime, Rubin himself filed a lawsuit against prominent Tallahassee lobbyist Paul Mitchell, in which Rubin accuses Patronis of running “pay to play — or else” politics out of his office. He claims Mitchell agitated for Grippa to be hired and turned against him when she wasn’t.

Rubin also contends his father, a wealthy developer, repeatedly refused pressure to make a $1 million political donation to guarantee Rubin’s own hiring. Mitchell, formerly a friend of Rubin, has called the allegations “self-serving” and “largely fictional.”

Background for this post provided by The News Service of Florida, republished with permission.

The public records released by the department on Friday, including redacted pages, are below.

next'Judge me by my merits': Jennifer Bradley talks Senate bid