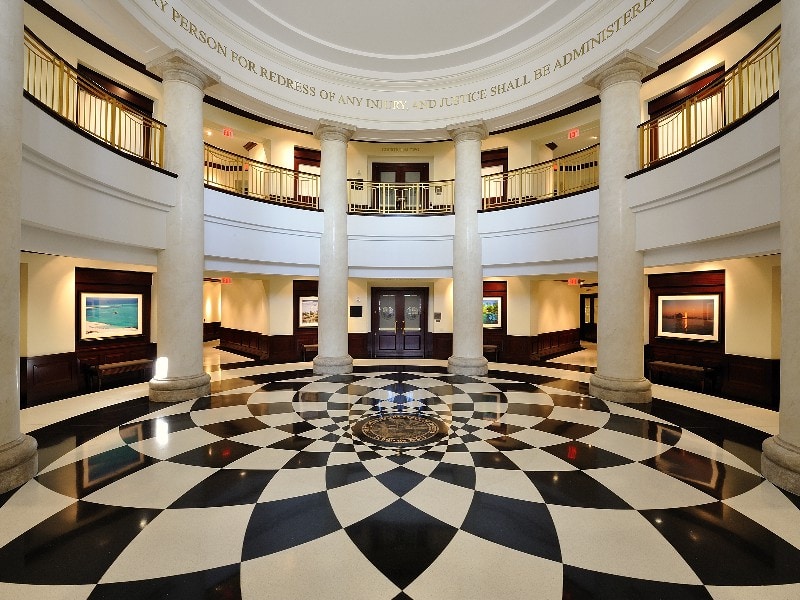 "...Drove me mad by insisting on strictly observing speed limits."

One of the candidates to be a new appellate judge in Tallahassee was involved in some of the first litigation over Everglades preservation.

Another got a client off the hook for “an eight-figure sum.”

Still another would check his grocery receipts to make sure he was rightly charged for every item, and never went over the speed limit.

Those are just a few tidbits from the public comment file made available this week by the 1st District Court of Appeal’s Judicial Nominating Commission.

The finalists in alphabetical order are:

— George Levesque, a GrayRobinson shareholder in Tallahassee and a former general counsel for the Florida Senate and House, and special counsel to the House during gaming compact negotiations with the Seminole Tribe.

— Rachel Nordby, a partner in the Shutts & Bowen law firm and former deputy solicitor general under Attorney General Pam Bondi. (She is married to Daniel Nordby, another Shutts partner who was general counsel to Gov. Scott.)

— Cristine Russell, a board-certified appellate lawyer and shareholder in the Rogers Tower law firm in Jacksonville.

— Adam Tanenbaum, general counsel for the Florida House of Representatives.

The 1st DCA is considered a high-profile assignment because, being based in the capital, the court hears appeals of civil cases challenging actions taken by the Governor and state government.

Most comments about the applicants are standard “letter of recommendation” fare, with friends, colleagues and former bosses commending the applicants for their ethics, skills, or temperament. Many stress the person’s conservative bona fides.

Some have details that stand out.

“Gary would make a great judge. He is an outstanding lawyer: smart, insightful, and practical,” he wrote. “… His practice requires him to learn new industries and regulatory regimes in each major new case, which gives me confidence that there is no area of law that he cannot learn if he were on the court.”

Roberson, as a commercial litigator at McGuire Woods, once “was able to obtain a dismissal of his bank client from a lawsuit in which an eight-figure sum was sought by another financial institution,” said Nicholas Morcom of Jacksonville’s Woolsey Morcom firm.

“I regularly sent him all referrals I had concerning consumer protection law,” Morcom wrote to the commission. “Judge Roberson had the essential qualities you want in an attorney you are considering referring work to: Talent and a desire to ensure the right thing happened for the client.”

Dallas-based lawyer Bill Wray told the JNC he was Tanenbaum’s “roommate for three years from 1993 to 1996 while we attended law school at Georgetown University.” There, Tanenbaum joined “the small Federalist Society … and was well known as one of the very few (and sometimes only) outspoken conservative voices in his classes.”

Wray’s anecdotes are perhaps the most humanizing, told with a touch of snark only a friend can get away with.

For instance, “grocery shopping was a weekly outing of ours while we were in law school,” Wray wrote. After checking out, “Adam would review his receipt … On more than one occasion, (he) noticed that he hadn’t been charged for an item.

Tanenbaum “would walk to customer service and insist that he pay for his extra item,” Wray said. “This is just a small example of Adam’s commitment to honesty and doing what was right and legal.

“There are many others,” he added. “Adam also drove me mad by insisting on strictly observing speed limits. My wife commented wryly on this when she unknowingly took Adam up on his offer to drive her home when he was in town for our wedding.”

— Cristine Russell’s dad, Terry Russell, was president of The Florida Bar in 2001-02. She also was appointed a pro bono attorney by the U.S. 11th Circuit Court of Appeals to “represent an incarcerated individual on a federal civil rights matter.”

— A recommendation for Nordby was signed by 16 colleagues from her state government service days, including state Solicitor General Amit Agarwal: “As a group, we do not all share the same legal and political views. But all of us agree that character, competence, and commitment are essential qualities for a successful judge, and all of us agree that Rachel possesses these qualities in abundance.”

— At least two retired Florida Supreme Court justices turned in recommendations: Major B. Harding for Nordby, and Raoul Cantero for Levesque: “Having elected officials as your clients can be a very challenging job. There are many personalities and egos involved, even in the best of circumstances. George always managed his clients – Florida state Senators – with professionalism, humility, and extreme competence.”

The vacancies were caused by the ascension of former judges T. Kent Wetherell II and Allen Winsor to the federal bench in North Florida. They were nominated by President Donald Trump.

The Governor’s Office has not said when DeSantis would make his decisions.

nextJoe Henderson: What happens when aid can't keep up with all the hurricanes?