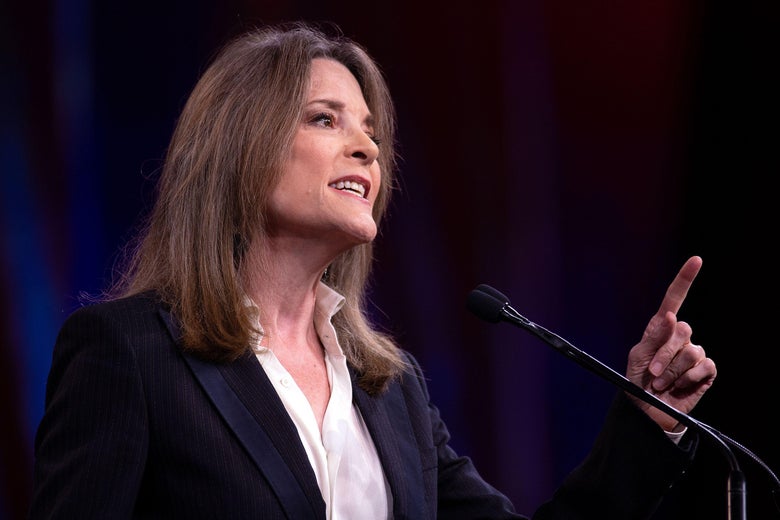 Democratic presidential candidate Marianne Williamson recently tweeted and deleted that the “power of the mind” could deter Hurricane Dorian.

Now, she tells MSNBC host Ali Velshi, she regrets only that she took down the tweet, which got it more notoriety.

The original tweet said: “The Bahamas, Florida, Georgia and the Carolinas…may all be in our prayers now. Millions of us seeing Dorian turn away from land is not a wacky idea; it is a creative use of the power of the mind. Two minutes of prayer, visualization, meditation for those in the way of the storm.”

Velshi interviewed the candidate about it Thursday, during her attendance at MSNBC’s Climate Forum 2020 at Georgetown University.

“You had a very unusual tweet about Hurricane Dorian saying that the power of the mind, two minutes of prayer, visualization, meditation … you seem to imply that that good energy can offset bad hurricanes,” he said.

“No, I didn’t. The only problem there is that I deleted that tweet,” Williamson answered. “I’m Jewish; I go to the doctor. There’s nothing anti-doctor about me. There’s not anything anti-science about me.”

Velshi replied: “It sort of felt a little anti-science-y.”

“Let me tell you something: A few days before I wrote that tweet I was in South Carolina and Georgia,” she said. “You think they weren’t praying for that thing to turnaround? And we’re just going to talk down to them? Anybody who prays in those southern states (was) praying, ‘dear God, turn this thing around.’

“You’d have been happier to un-delete that tweet? You’d rather it just (remain) live?” Velshi asked.

“You know why I deleted it? Because Joyce Carol Oates criticized it,” Williamson said. “And I’m such a fan of Joyce Carol Oates. I’ve read all her books and I just said, ‘oh no.’ It’s so stupid to delete a tweet when you’re in the public eye. It means it’s going to get more attention. As soon as I deleted it I went, ‘oh no.’ ”

A link to the video is here.