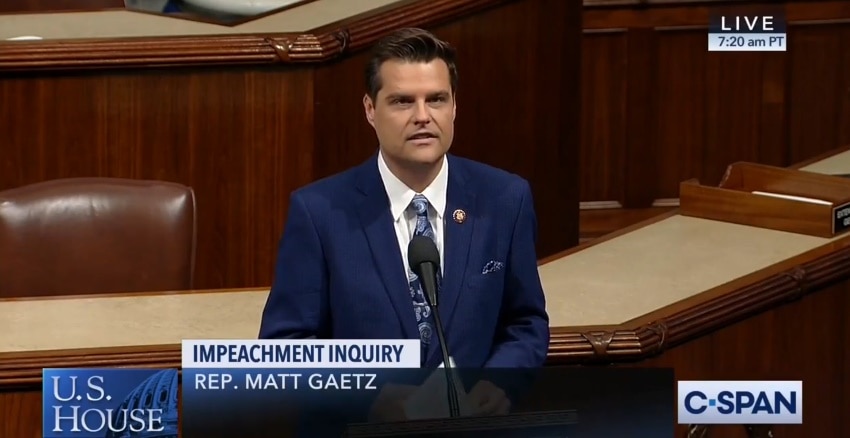 Gaetz said the Speaker was catfished.

On the floor of the United States House of Representatives Wednesday, U.S. Rep. Matt Gaetz slammed the push to impeach President Donald Trump.

Gaetz, a staunch Trump backer, said that the “fact-free” impeachment effort was motivated by a “blood lust.” And that Speaker Nancy Pelosi was duped into a catastrophic play.

“The Speaker of the House of Representatives has been functionally ‘catfished’ into a politically fatal impeachment proceeding based on rumors, based on faulty evidence, and based on a blood lust for the President politically that does not serve our nation well,” Gaetz contended.

Gaetz contended that Trump was not leaning on the Ukraine to investigate former Vice-President Joe Biden; rather, he wanted Ukraine to get to the bottom of 2016 election interference claims.

“The favor we seek is cooperation … as we work to determine what activities in the Ukraine may have been in any way involved in the 2016, not 2020, but in the 2016 efforts to interfere with the United States election,” Gaetz asserted.

The Congressman defended the President’s personal lawyer as well.

“Mayor Rudy Giuliani,” said Gaetz, “has every right to go to the Ukraine and try to ascertain whether or not activities in that country were harming his client as a result of the corrupt connections, which may have existed between the DNC and some elements in Ukraine.”

Gaetz then put the investigation in what he sees as a larger continuum of a familiar narrative against the President.

“I saw this movie as it related to Russia and I didn’t like it very much, and I doubt I’m going to enjoy the cheap Ukrainian knockoff. The Speaker has embraced these concerns and I fear that her embrace of impeachment does great damage to the House of Representatives because there may be a time where we will have to exercise our impeachment powers because there is true crime of corruption and the Speaker’s actions have embarrassed the United States Congress and they harm our entire country,” Gaetz asserted.

There is, Gaetz contends, no “true crime of corruption” here.

“Maybe next time, the radical left will wait for the facts before engaging in a reflexive, fact-free impeachment,” Gaetz said.