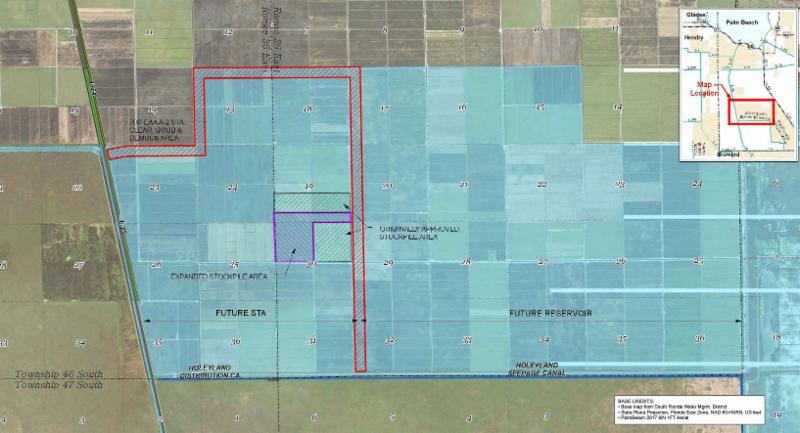 The EAA reservoir will aim to store water to stem the spread blue-green algae.

The Florida Crystals Corporation has voluntarily terminated a lease covering lands slated to be used for the construction of the Everglades Agricultural Area (EAA) reservoir project. Gov. Ron DeSantis says that move should expedite the reservoir’s construction.

The reservoir was proposed in response to discharges from Lake Okeechobee that can spread toxic blue-green algae that is present inside the lake.

The EAA reservoir will aim to store water that would otherwise be directed into other water systems and potentially spread that algae.

The Florida Crystals lease covered the stormwater treatment area (STA) of the reservoir. The lease was terminated on Monday.

“Getting the EAA Reservoir Project built and operational is a top priority, and this termination means we can continue to expedite this critical project,” Bartlett said.

“Thanks to Governor DeSantis and the Florida Legislature, construction of the STA is fully funded. The important STA component of the EAA Reservoir Project will treat and send more clean water south to the Everglades. We look forward to working closely with the Corps to expedite federal permits so we can immediately begin site preparation work.”

Bartlett and the SFWMD submitted permit applications for the reservoir in June covering land being controlled by Florida Crystals. The corporation said at the time it intended to cooperate with the SFWMD in making the land available.

Gaston Cantens, the corporation’s Vice President of Corporate Relations, reiterated that commitment with a statement Thursday.

“Florida Crystals has always been committed to ensuring the South Florida Water Management District will have land available as needed for the EAA reservoir project,” Cantens said.

“This week, we fulfilled our promise by releasing leased land early based on the district’s expedited construction schedule. This process has once again proven that farming is compatible with restoration and is the best use of these lands to protect jobs and food supply until they are needed for the project.”

“The Department will continue to work closely with the water management district to expedite and advance Everglades restoration projects and aggressively protect our natural resources and improve our water quality.”

But critics of the lease, which the district said was in the works for months, noted the issue was posted on a meeting agenda the night before it was approved.

“Thanks to Governor Ron DeSantis’ determined leadership, what began as a post-Election Day double-cross by Florida Crystals and the former South Florida Water Management District board to complicate construction of the Everglades Reservoir has instead now forged a path for its groundbreaking,” Everglades Foundation CEO Eric Eikenberg said in a statement Thursday.

The move by Florida Crystals is expected to allow the district to advance the construction schedule on a roughly $1.6 billion reservoir project that state lawmakers approved in 2017. The reservoir is aimed, at least in part, at helping reduce the amount of polluted water going from Lake Okeechobee into the St. Lucie and Caloosahatchee rivers, which have faced major problems with toxic algae.

previousLast Call for 10.3.19 — A prime-time read of what’s going down in Florida politics