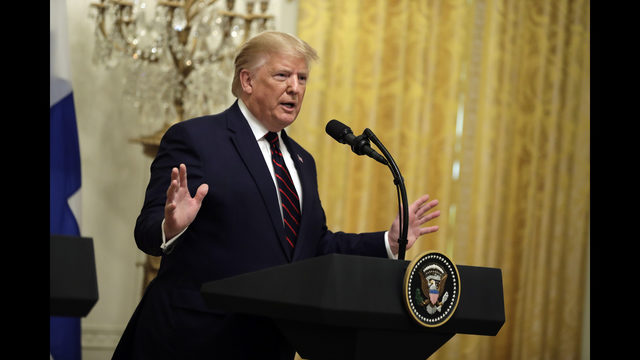 President Donald Trump on Thursday accused Democrats of an all-out attempt to “totally obliterate Medicare” and portrayed himself as the program’s defender as he signed a directive to expand the program’s private insurance options.

Trump skipped past his own proposals for Medicare budget cuts, and he ignored the fact that no Democrat is proposing to take coverage or benefits away from seniors.

During a visit to The Villages, a bustling community for adults in Central Florida, Trump was trying to turn attention away from House Democrats’ impeachment inquiry and focus on pocketbook issues instead.

“That’s why they do the impeachment crap, because they know they can’t beat us fairly,” he told the friendly audience, which included many seniors. That part of Florida voted overwhelmingly for Trump in 2016.

Health care has emerged as a central issue for Democrats competing for their party’s 2020 presidential nomination. Much of the debate has centered on Sen. Bernie Sanders‘ “Medicare for All” plan, which would cover everyone under a government-run plan and eliminate most private insurance. Trump said electing a Democrat would jeopardize seniors’ access to health care.

“Medicare is under threat like never before,” Trump said. “Almost every major Democrat in Washington has backed a massive government health care takeover that would totally obliterate Medicare.”

Far from “obliterating” Medicare, Sanders says his plan would lower costs and provide new benefits, including coverage for long-term care. Medicare, which covers about 60 million seniors and disabled people, is the government’s flagship health care program.

Trump also signed an executive order directing his administration to pursue changes to Medicare. Much of what he wants to do is geared toward enhancing Medicare Advantage, the private insurance option picked by about one-third of seniors.

But there are trade-offs. People joining a Medicare Advantage plan generally must accept limits on their choice of hospitals and doctors as well as prior insurer approval for certain procedures. If they change their minds and decide to return to traditional Medicare, they’re not always guaranteed supplemental “Medigap” coverage, which is also private.

The president’s order is basically a to-do list for the Department of Health and Human Services that will require months of follow-up. Among the other priorities are an expansion of telemedicine and changes to avoid overpaying for procedures just because they get done in a hospital instead of a doctor’s office.

Health and Human Services Secretary Alex Azar said Trump’s order directs his department to examine whether its current policies and practices put traditional Medicare ahead of the private Medicare Advantage option. Some advocates for older people say that it’s the other way around and that the administration is trying to put private plans ahead.

The executive order does not involve a major overhaul of Medicare, which would require congressional approval.

So far, the debate about Medicare for All has mainly been about its projected costs to the government, estimated at $30 trillion to $40 trillion over 10 years.

The Sanders plan would eliminate most private health insurance, including the Medicare Advantage option. Sanders, who unexpectedly underwent a heart procedure this week, says Medicare for All would nonetheless offer seniors broader benefits and lower costs.

Sanders’ style of single-payer health care has long been popular among liberals. But recent polling has shown that a majority of Democrats and independents who lean Democratic prefer expanding coverage by building on the Affordable Care Act, or the Obama-era health law. Trump is asking federal courts to overturn that law as unconstitutional.

As a presidential candidate, Trump promised not to cut Medicare. As president, he has avoided calling for privatization of the program, raising the eligibility age beyond 65 or rolling back benefits.

But Trump’s latest budget proposed steep cuts in Medicare payments to hospitals and other service providers, prompting protests from the industry and accusations by Democrats that he was going back on his promises to seniors. The Medicare cuts went nowhere in Congress.

Republished with the permission of The Associated Press.