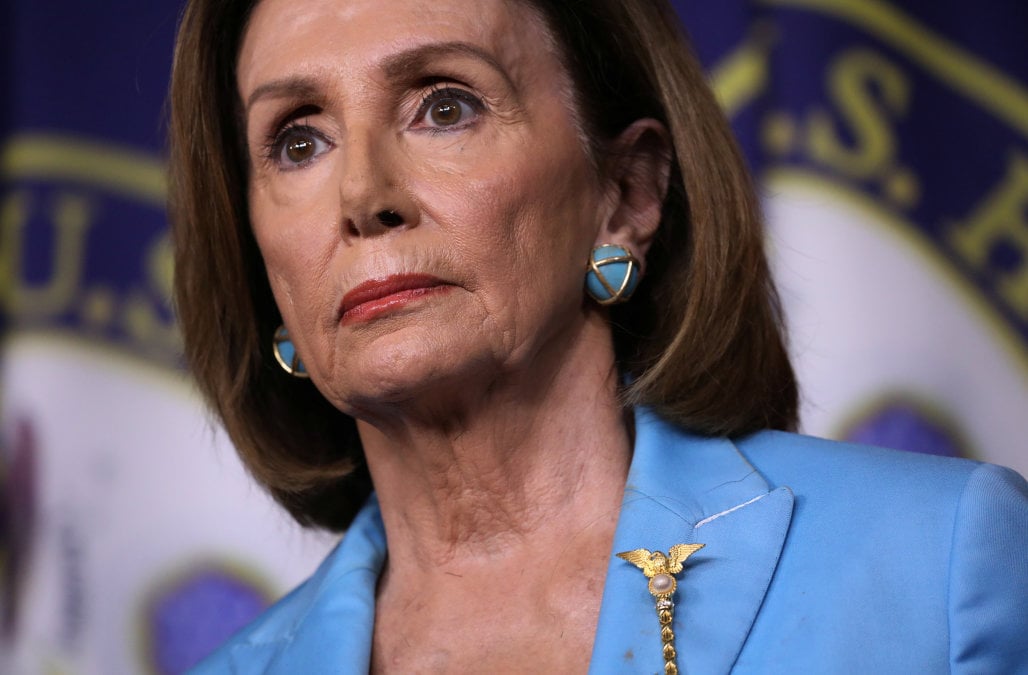 Supreme Court has held that impeachment was an issue for Congress, not courts

The U.S. Constitution gives the U.S. House of Representatives “the sole power of impeachment” — but it confers that authority without an instruction manual.

Now comes the battle royale over precisely what it means.

In vowing to halt all cooperation with House Democrats’ impeachment inquiry, the White House on Tuesday labeled the investigation “illegitimate” based on its own reading of the Constitution’s vague language.

In an eight-page letter, White House counsel Pat Cipollone pointed to House Speaker Nancy Pelosi’s failure to call for an official vote to proceed with the inquiry as grounds to claim the process a farce.

“You have designed and implemented your inquiry in a manner that violates fundamental fairness and constitutionally mandated due process,” Cipollone wrote.

But Douglas Letter, a lawyer for the House Judiciary Committee, told a federal judge Tuesday that it’s clear the House “sets its own rules” on how the impeachment process will play out.

The White House document lacked much in the way of legal arguments, seemingly citing cable TV news appearances as often as case law. And legal experts cast doubt upon its effectiveness.

“I think the goal of this letter is to further inflame the president’s supporters and attempt to delegitimize the process in the eyes of his supporters,” said Stephen Vladeck, a law professor at the University of Texas.

Courts have been historically hesitant to step in as referee for congressional oversight and impeachment. In 1993, the Supreme Court held that impeachment was an issue for the Congress and not the courts.

In that case, Walter Nixon, a federal district judge who was removed from office, sought to be reinstated and argued that the full Senate, instead of a committee that was established to hear testimony and collect evidence, should have listened to the evidence against him.

The court unanimously rejected the challenge, finding impeachment is a function of the legislature that the court had no authority over.

As for the current challenge to impeachment, Vladeck said the White House letter “does not strike me as an effort to provide sober legal analysis.”

Gregg Nunziata, a Philadelphia attorney who previously served as general counsel and policy adviser to Florida’s Republican U.S. Sen. Marco Rubio, said the White House’s letter did not appear to be written in a “traditional good-faith back and forth between the legislative and executive branches.”

He called it a “direct assault on the very legitimacy of Congress’ oversight power.”

“The Founders very deliberately chose to put the impeachment power in a political branch rather the Supreme Court,” Nunziata told The Associated Press. “They wanted this to be a political process, and it is.”

G. Pearson Cross, a political-science professor at the University of Louisiana at Lafayette, said the letter appeared to act as nothing more than an accelerant on a smoldering fire.

“It’s a response that seems to welcome a constitutional crisis rather than defusing one or pointing toward some strategy that would de-escalate the situation,” Cross said.

After two weeks of a listless and unfocused response to the impeachment probe, the White House letter amounted to a declaration of war.

It’s a strategy that risks further provoking Democrats in the impeachment probe, setting up court challenges and the potential for lawmakers to draw up an article of impeachment accusing President Donald Trump of obstructing their investigations.

Democrats have said that if the White House does not provide the information, they could write an article of impeachment on obstruction of justice.

It is unclear if Democrats would wade into a lengthy legal fight with the administration over documents and testimony or if they would just move straight to considering articles of impeachment.

House Intelligence Committee Chairman Adam Schiff, the California Democratic Congressman who is leading the Ukraine probe, has said Democrats would “have to decide whether to litigate or how to litigate.”

But they don’t want the fight to drag on for months, as he said the Trump administration seems to want to do.

A federal judge heard arguments Tuesday on whether the House had undertaken a formal impeachment inquiry despite not having taken an official vote and whether it can be characterized, under the law, as a “judicial proceeding.”

The distinction matters because while a grand jury testimony is ordinarily secret, one exception authorizes a judge to disclose it in connection with a judicial proceeding. House Democrats are seeking grand jury testimony from special counsel Robert Mueller’s Russia investigation as they conduct the impeachment inquiry.