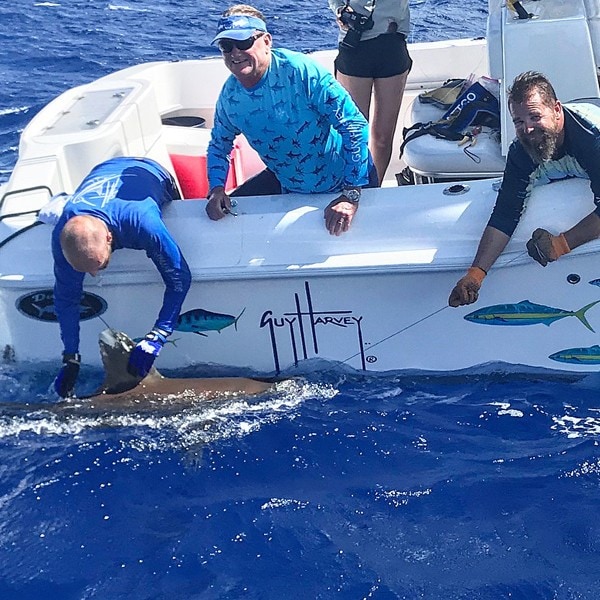 And definitely not in a bowl of soup.

Guy Harvey knows more about sharks than how to paint them. He’s the founder of a research institute at Nova Southeastern University bearing his name that tracks the sea creatures in the Gulf of Mexico and Caribbean Sea.

So people should pay attention when he describes a documented decline in the population.

“Many species of sharks are getting rarer and rarer,” he says.

That’s largely because of the dastardly poaching of shark fins, a popular commodity in the Far East.

Now, Guy Harvey Enterprises has partnered with Shark Allies in an effort to shape policy and encourage sustainable shark tourism. It’s a chance not only to save a critical part of the aquatic ecosystem but to grow an industry that celebrates the sea creatures instead of exploiting them.

Worldwide, shark diving generated $314 million in revenue per year, supporting 10,000 jobs, according to Shark Allies. That’s an amount set to double over the next 20 years.

But the sea beasts are a treasure people have to seek out, and for that matter one that generates a significant amount of fear.

“Many people think we would be better off without sharks, that then they could go to the beach and not worry,” says Stephanie Brendl, president of Shark Allies.

But as a predator on top of the food chain, sharks play a critical role in controlling sustainable populations of all sea life.

That’s on top of the tourism potential of the sharks themselves. Diving expeditions focused on sharks generate $221 million in business annually, making up nearly a third of the money spent on diving worldwide. Growing popularity of cage dives has grown in recent years.

The Professional Association of Diving Instructors says shark diving has become a popular sport among some 7 million active divers, and that 71 percent of all divers say they will pay more for the chance to see sharks.

In this industry, the ferocious reputation of the animals becomes an asset instead of a liability.

But that, too, will be lost if shark finning devastates the population further.

Harvey notes that in China, a bowl of shark fin soup easily goes for more than $100. Establishments selling the dish as a rare delicacy charge as much as $450, according to Shark Savers.

The cost to the Gulf of Mexico and Caribbean, though, has been incredible. Since the 1960s, the population of some shark species has been nearly wiped out.

“Especially with the oceanic whitetip shark, now they are at less than 5 percent of their pre-exploitation level,” Harvey said.

Of course, Harvey has long remained a celebrated figure in the angler world. “I’m not a treehugger; I’m a fisherman,” he said.

Harvey usually engages in catch and release. But he has no problem with hunting non-endangered species of sharks for food, and respects those fishermen who take the whole of their prey.

That’s a far cry from the fin hunters who snare a shark, cut off only the part they want, and toss the carcass back in the ocean.

“Any and every sensible person agrees the shark fin trade is diabolical and we shouldn’t put up with it,” he said.

One of the great policy challenges around shark finning is that creatures move through national and international waters, letting poachers literally float in and out of jurisdiction.

And while it’s illegal to go fin hunting in U.S. waters, Florida does not prohibit the import, export or sale of fins the way other states do. State Rep. Kristin Jacobs, a Coconut Creek Democrat, on Thursday filed legislation (HB 401) that would ban the trade here.

“If we can get rid of every loophole, that will help,” Harvey said.

There’s an opportunity for Florida to see millions in revenue, he said, by protecting sharks more vigorously. Tourists who get a thrill sitting in a cage and interacting with sharks enjoy the creatures without harming them. That leaves an environment intact while making more people appreciate the strength and beauty of the animals.

Killing too many sharks, especially those who have reached reproductive maturity, puts that industry and the health of the ocean environment at risk, Harvey said.

And he doesn’t want a world where you can only enjoy the majesty of sharks by looking at his paintings.