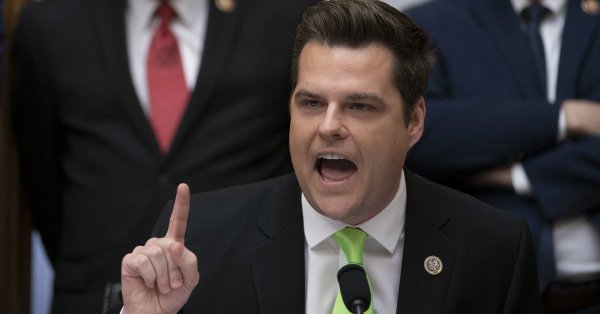 Matt Gaetz can be theatrical, hyperbolic, and sometimes more than a little loony - just like President Donald Trump, the man he adores.

U.S. Rep. Matt Gaetz of Florida’s first congressional district is theatrical, hyperbolic, and at times more than a little loony. In other words, Gaetz is a mirror image of the man he adores, President Donald Trump.

But even by Gaetz’s headline-grabbing standards, the circus stunt he led Wednesday was off the rails. Gaetz was at the forefront of a Republican unauthorized intrusion into a deposition in the impeachment inquiry against Trump.

Call it the charge of the blight brigade.

Or the not-too-bright brigade. 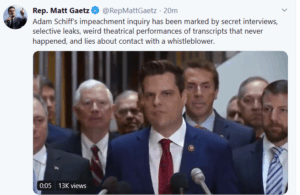 He helped lead about two dozen or so like-minded wingnuts into the Sensitive Compartmented Information Facility (SCIF) in the basement of the U.S. Capitol. Many had cell phones, which is a major no-no in that secure location. 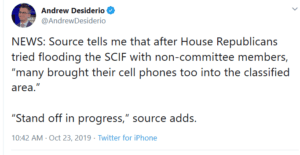 They also munched on pizza during the occupation.

“They basically ran over a member of the staff” to get in the room, Rep. Debbie Wasserman Schultz (D-Fla.) said on Politico.

“They just came into the room and started shouting about the president. Literally, some of them were just screaming … saying that the process is wrong.”

The process is following House guidelines.

Republicans like Matt Gaetz are screaming about a lack of transparency during the inquiry. But a reported 45 Republicans have had access to depositions taken so far because they sit on committees charged with the investigation. Lawyers for Democrats and Republicans get equal time for questions during the depositions.

Democrats are leaking damaging information that comes up during these sessions, it’s true. That aggravates people like Gaetz, who can only sputter and say it’s all a bunch of crap.

It centers around a charge that Trump threatened to withhold military aid to Ukraine unless its president publicly investigated Joe Biden and his son, Hunter Biden. If true, that could constitute abuse of presidential power and lead to Trump’s impeachment.

Acting Chief of Staff Mike Mulvaney essentially confirmed the basics of that charge.

“We do that all the time with foreign policy,” he said.

When he was told that sounded like a quid pro quo, he said: “I have news for everybody: Get over it. There’s going to be political influence in foreign policy.”

That brings us back to Gaetz.

He gets positively jacked when defending Trump. Remember when he sent a tweet to Michael Cohen, Trump’s former lawyer, that sounded like a threat. Cohen had turned on Trump by that point. He also received three years in prison for various dirty deeds he did while working for the President.

“Hey @MichaelCohen212 — Do your wife & father-in-law know about your girlfriends? Maybe tonight would be a good time for that chat. I wonder if she’ll remain faithful when you’re in prison. She’s about to learn a lot,” Gaetz tweeted.

He faced an ethics probe over that and later apologized.

During an appearance on Sean Hannity’s Fox News show, Gaetz took it up a notch.

“The radical left and their allies in the fake news media have been uncontent to just disagree with him, and so they have been trying to delegitimize his election,” he said.

“They’re going to rush to an impeachment, and the American people will see it as the politically illegitimate exercise that it is.”

So, in Matt Gaetz’s world, I guess that’s how you fight back. He’s not content to just disagree with the process. He’s trying to delegitimize the probe.

And last week, he was ejected from a closed-door hearing with former Trump aide Fiona Hill.

That’s how a brat behaves.