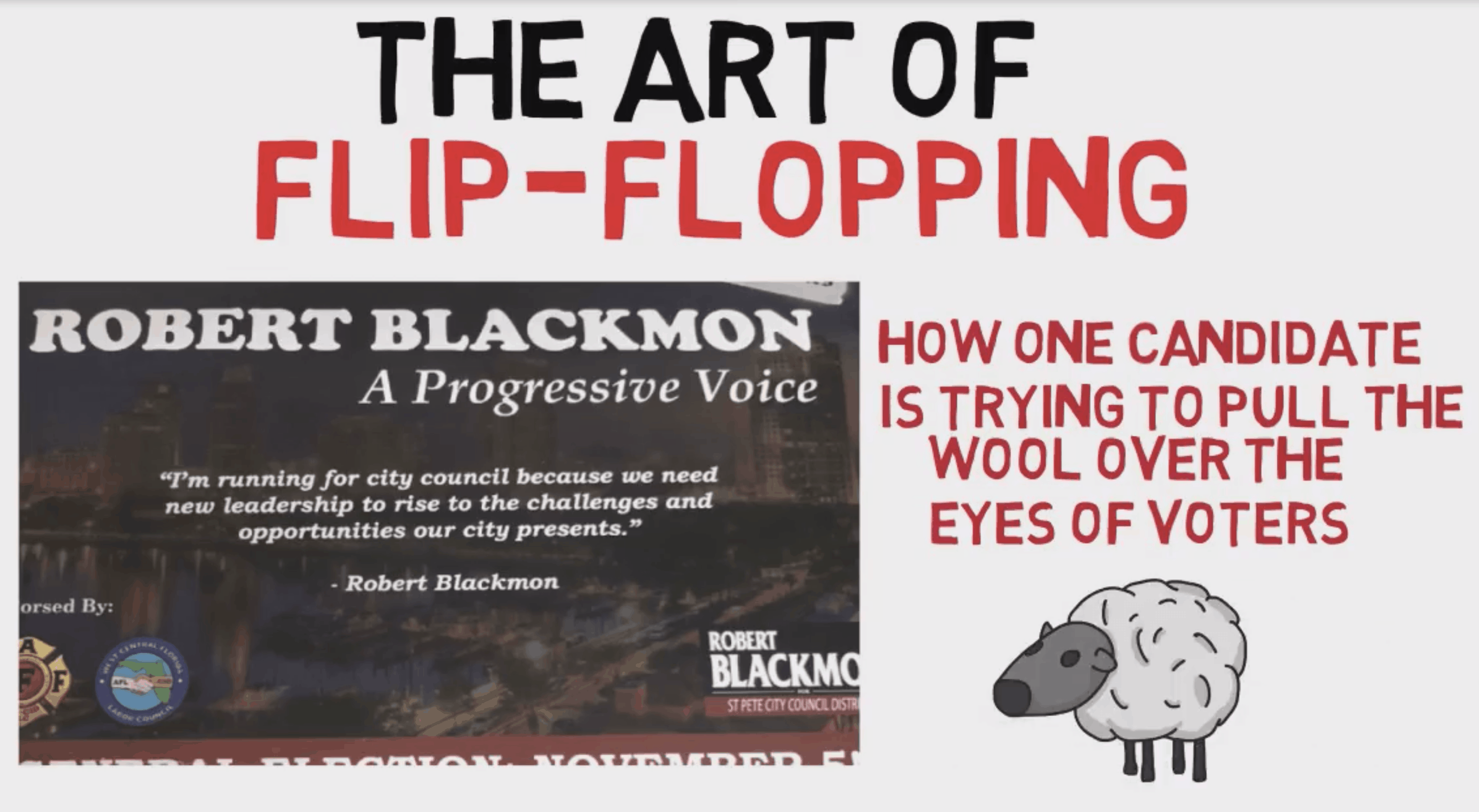 The video makes a valid point, and one Hornbeck’s critics have mentioned before. But it also highlights the trouble he’s had in his campaign with reaching voters.

The video begins with a screen showing a hand doodling words and images on paper.

“The art of flip-flopping. “How one candidate is trying to pull the wool over the eyes of voters,” the hand draws.

It then goes on to illustrate, literally, “two mailers with very different messages.”

The video then shows an image of a campaign mailer Democrats received in which he’s described as a “progressive voice“.

The second mailer, which Hornbeck claims targeted Republicans, does not use the term conservative. Instead it says Blackmon “will bring a small business approach to the City Council.

The video then goes on to show the opposite side of the campaign fliers. In the one allegedly sent to Democrats, there’s a photo of Blackmon participating in this year’s Pride Parade. In the other, that photo isn’t shown. Instead it shows Blackmon “cozying up” to former Mayor Rick Baker, a Republican who endorsed Blackmon.

He’s right. But there are two potential challenges with his ad’s messaging. The first is, targeted advertising is a commonly used tool in political campaigns. Democrats and Republicans often receive materials from candidates sharing different messages on issues more likely to resonate with the political ideologies of their registered party.

But the second challenge concerns Hornbeck as a candidate. The video ends with a short segment pointing to his “one and only mailer.

Hornbeck’s campaign got a late start despite the fact that he entered the race more than three months before Blackmon. He didn’t aggressively raise funds, relying instead on $14,000 in self-funding, which brought his campaign finance tally to less than $21,000 compared to Blackmon’s more than $79,000.

Hornbeck claimed he didn’t want to burden supporters with financial asks and that the money he raised paired with his own self-funding was enough to get out the message. Candidates have successfully pulled off such campaigns. But sending just one mailer to voters compared when an opponent has mailed several and has been blasting television ads on local airwaves for the past several days, is likely not enough to get his name out to disengaged voters.

Another kicker, Hornbeck’s boosted Facebook post popped up on Monday, just one day before the election and after most voters who will vote in the election had already returned a mail ballot.