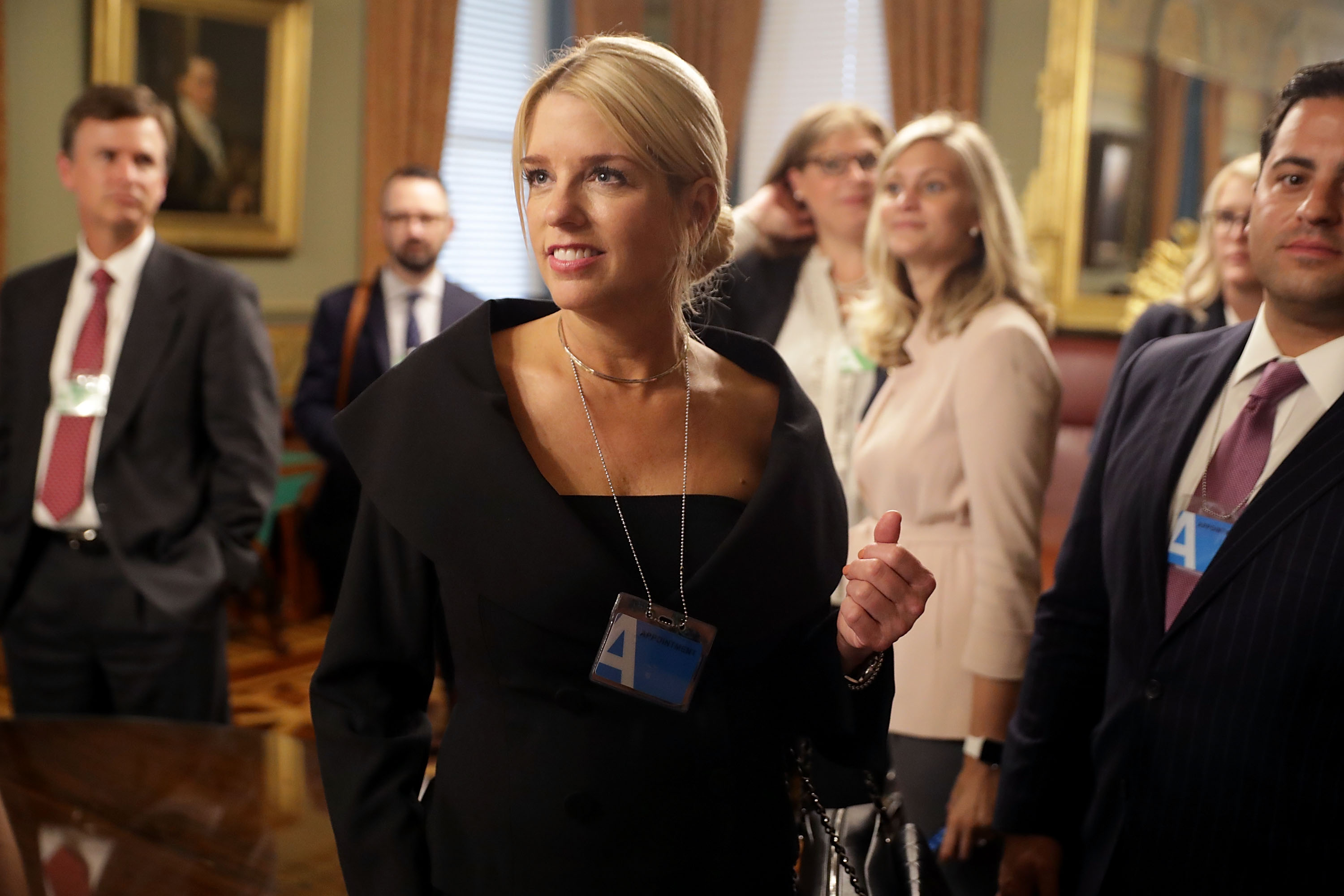 “There is no prohibition in the (U.S. government) Ethics Pledge or ethics regulations ... "

An agent of the Qataris. Lobbying for a Kuwaiti firm. A decision to steer clear of a lawsuit against Trump University.

As she prepares to defend President Donald Trump against impeachment and accusations that he pressured a foreign government to aid his reelection campaign, former Florida state Attorney General Pam Bondi is stepping down from a lobbying firm where she represented foreign interests.

The White House announced this week that Bondi is one of two new staffers who will join the White House on a temporary basis to bolster its messaging and communications in response to the impeachment inquiry, which is unfolding at a rapid pace. Next week, the House Intelligence Committee will begin holding public hearings with witnesses as they build their case. The inquiry centers on whether Trump abused his office by withholding military aid and other support to pressure Ukraine to investigate his political rivals.

Trump wanted Ukraine’s president to publicly commit to investigating Hunter Biden, the son of former Vice President Joe Biden who served on the board of a Ukrainian gas company. He pushed for the investigation while holding up nearly $400 million in military aid.

Helping craft the White House response to the impeachment inquiry will be Bondi, a longtime Trump supporter who stepped down as Florida’s attorney general in January. Since then, Bondi has worked as a lobbyist for Ballard Partners, a Washington firm that has touted its influence inside the Trump administration. Her U.S. clients have included General Motors, the commissioner of Major League Baseball and a Christian anti-human-trafficking advocacy group.

Bondi also registered as a foreign agent for the government of Qatar and as a lobbyist for a Kuwaiti firm, according to Justice Department foreign agent filings and congressional lobbying documents. Her work with the Qataris was related to anti-human-trafficking efforts leading up to the World Cup, a person familiar with the efforts said.

Bondi is now winding up her work for Ballard Partners, White House press secretary Stephanie Grisham told The Associated Press. Despite Bondi’s recent work for foreign and domestic interests, Grisham said those ties would not pose any ethics concerns.

“There is no prohibition in the (U.S. government) Ethics Pledge or ethics regulations that would prevent a former lobbyist or former foreign agent from taking an employee position,” Grisham said.

Bondi would have to recuse herself from any matters involving Ballard or other former employers of “matters on which they lobbied,” the press secretary said.

Bondi signed on in July as a consultant to Qatar’s U.S. embassy, providing “support regarding Qatari relations with U.S. government officials, U.S. business entities and nongovernmental audiences, in dealing with matters pertaining to combating human trafficking,” according to Justice Department foreign agent filings. A contract amendment shows that her firm was paid $115,000 a month for the work she and a second lobbyist performed for the Qatari embassy.

As Florida’s top prosecutor, Bondi stressed human trafficking issues and urged tightening state laws against traffickers. One of her first clients as a Ballard lobbyist was the U.S. Institute Against Human Trafficking, an advocacy group that describes itself as a “faith-based organization anointed by God to fight against human trafficking in America.” The group paid Ballard $80,000 this year to lobby the White House and Congress on “anti-human trafficking issues.”

A person familiar with Ballard’s operation said the firm had submitted paperwork to the Justice Department on Thursday to deregister Bondi as a foreign agent for the Qatari Embassy.

The Kuwaiti company has been embroiled in a spate of legal disputes and court actions, including the imprisonment of two of its former executives in Kuwait on embezzlement charges. Ballard and several other lobbying firms working for the company have contacted administration and congressional officials, exploring whether the U.S. could use Magnitsky Act sanctions to target Kuwaiti officials who have been in a long-running dispute with the firm.

Ballard Partners is also sending letters to Congress to formally end Bondi’s work as a registered lobbyist, though official notification may not be publicly available until the end of this quarter, said the person familiar with the company, who spoke on condition of anonymity to discuss the firm’s internal matters.

White House counselor Kellyanne Conway on Thursday dismissed questions about Bondi’s lobbying, saying, “She’s not here to lobby. She’s here to make sense about how in the world we’re going to impeach or remove a democratically elected president.”

In September 2013, the nonprofit Donald J. Trump Foundation gave $25,000 to a Florida political committee supporting Bondi’s reelection campaign for attorney general. The donation came at the same time that Bondi’s office was considering whether to join other state prosecutors in suing Trump University, which ran a for-profit real estate seminar, after numerous consumer complaints.

A month later, Bondi announced that she would not be joining in the lawsuits against Trump University. Both the university and the foundation were later closed in response to state government legal actions against them.

The ethics advocacy group Citizens for Responsibility and Ethics in Washington charged that the Trump nonprofit’s donation was illegal because the charity failed to report it, which would have been prohibited under federal rules governing nonprofits such as the Trump Foundation. The nonprofit later told The Washington Post that it had paid a $2,500 fine to the Internal Revenue Service for violating federal tax rules in its donation backing the pro-Bondi political organization.

A judge on Thursday ordered Trump to pay $2 million to an array of charities as a fine for misusing his own charitable foundation to further his political and business interests.