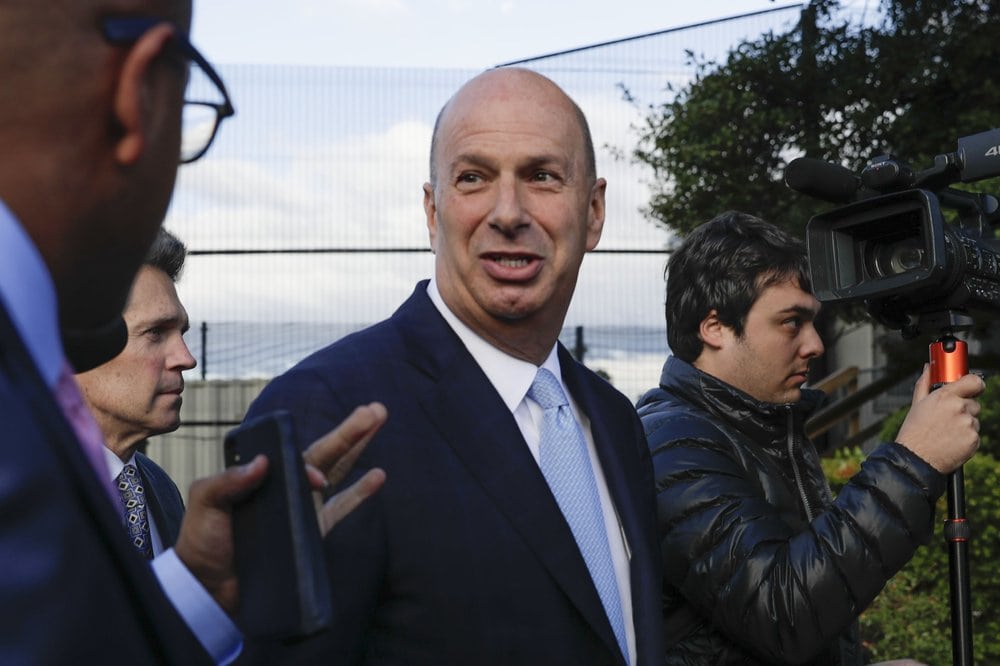 The second diplomatic staffer also at the table was Suriya Jayanti, a foreign service officer based in Kyiv.

A second U.S. Embassy staffer in Kyiv overheard a key cellphone call between President Donald Trump and his ambassador to the European Union discussing the need for Ukrainian officials to pursue “investigations,” The Associated Press has learned.

The July 26 call between Trump and Gordon Sondland was first described during testimony Wednesday by William B. Taylor Jr., the acting U.S. ambassador to Ukraine. Taylor said one of his staffers overhead the call while Sondland was in a restaurant the day after Trump’s July 25 phone call with Ukrainian President Volodymyr Zelenskiy that triggered the House impeachment inquiry.

The second diplomatic staffer also at the table was Suriya Jayanti, a foreign service officer based in Kyiv. A person briefed on what Jayanti overheard spoke to AP on condition of anonymity to discuss a sensitive matter currently under investigation.

Trump on Wednesday said he did not recall the July 26 call.

The staffer Taylor testified about is David Holmes, the political counselor at the embassy in Kyiv, according to an official familiar with the matter who spoke on condition of anonymity.

Holmes is scheduled to testify Friday before House investigators in a closed session.

Taylor was one of the first witnesses called Wednesday during the impeachment inquiry’s initial open hearing. He testified that his staffer could hear Trump on the phone asking Sondland about “the investigations.”

The accounts of Holmes and Jayanti could tie Trump closer to alleged efforts to hold up military aid to Ukraine in exchange for investigations into political rival Joe Biden and his son Hunter’s business dealings.

Current and former U.S. officials say Sondland’s use of a cellphone in a public place in Ukraine to speak with anyone in the U.S. government back home about sensitive matters, let alone the president, would be a significant breach of communications security.

Jayanti is an attorney who joined the State Department in 2012 and was previously posted at the U.S. Embassy in Iraq. She has been stationed since September 2018 at the embassy in Kyiv where she helps coordinate U.S. business interests with the former Soviet republic’s energy industry.

Jayanti was in Washington last month and scheduled for a closed-door interview with impeachment investigators. But the deposition was canceled because of the funeral for former House Oversight Chair Elijah Cummings and has not yet been rescheduled.

Holmes, a career diplomat, joined the Foreign Service in 2002 and has served in Afghanistan, Colombia, India, Kosovo and Russia as well as on the White House National Security Council staff. He won an award for constructive dissent from the American Foreign Service Association in 2014 for complaining about problems that an alternate diplomatic channel had caused in South Asia and recommending organizational changes to the State Department’s bureaucratic structure for the region.

U.S. diplomats and other government employees are instructed not to use cellphones for sensitive official matters while traveling anywhere abroad but notably in countries known to be targeted for surveillance by intelligence agencies such as Russia, China and Israel.

Ukraine has long been among the countries of concern, particularly since a 2014 incident in which the U.S. accused Russian intelligence of eavesdropping on and then leaking a recording of a conversation between two senior U.S. officials in Kyiv that led to great embarrassment and strains between the U.S. and its European allies.

In that recording, then-Assistant Secretary of State for European Affairs Victoria Nuland is heard telling former U.S. Ambassador to Ukraine Geoff Pyatt “F-ck the EU,” because of the European Union’s slowness to respond to the political crisis in the country.

“That phone call was also a mistake the way it was conducted and it had huge implications for our foreign policy,” said Michael McFaul, a former U.S. ambassador to Russia now at Stanford University. “Particularly after that, anybody should understand how dangerous it is to make an unsecured call in Kyiv, or anywhere else for that matter.”

“Obviously, making a phone call from Kyiv to the president of the United States means that not just the Russian intelligence services will be on the call, but a whole lot of other people, too,” McFaul said. “If it was that important, he [Sondland] could have easily gotten up from the restaurant, gone to the embassy and made a secure call through the White House operations center. A lower-level official would probably be reprimanded for this kind of breach.”