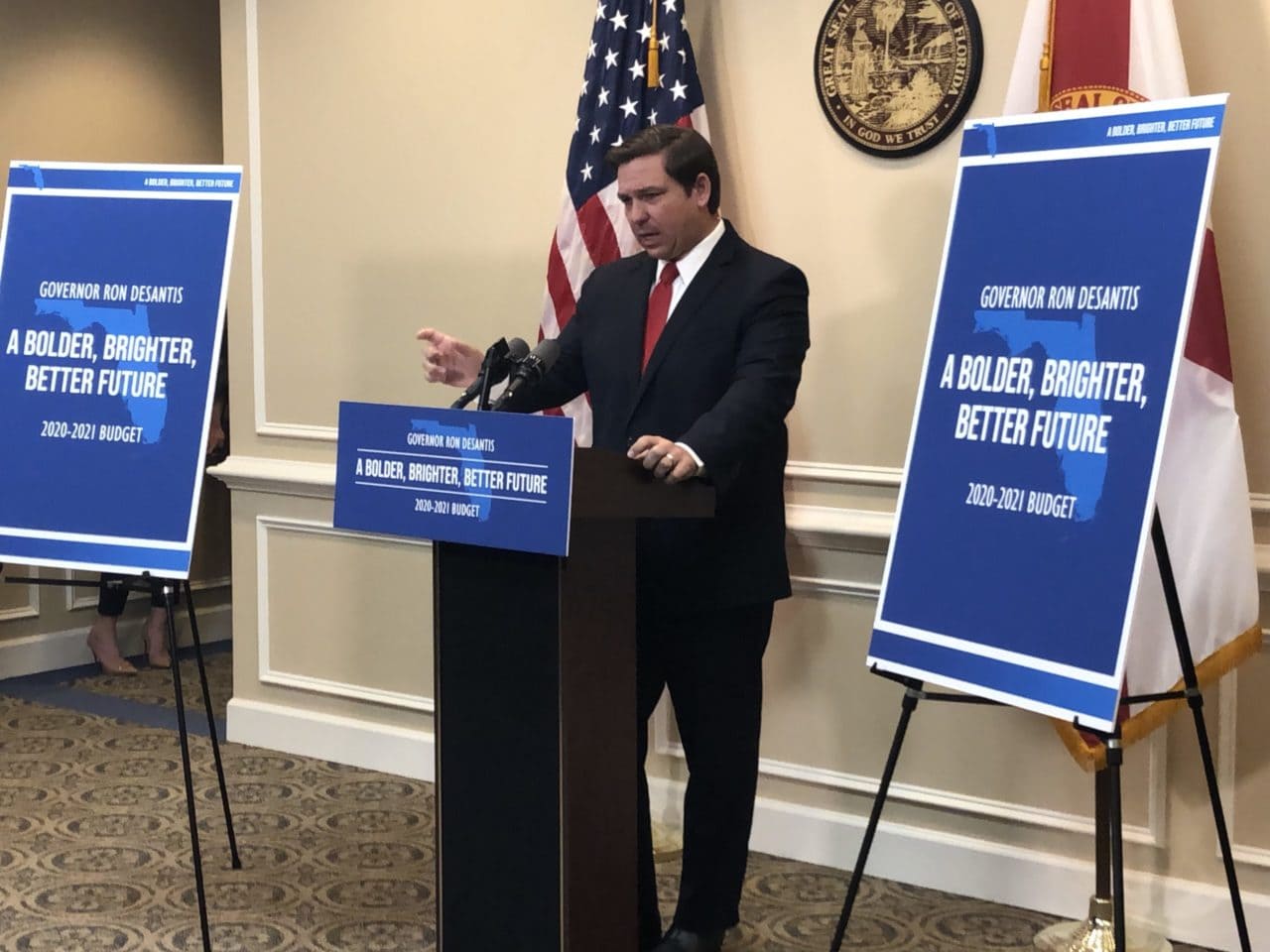 The announcement comes at a quiet time in the Capitol when most lawmakers are out until after Thanksgiving. But Senate President Bill Galvano said the early notice gives lawmakers time to hold formal hearings on the budget during December pre-Session committees.

“In the coming days and weeks, we will evaluate the Governor’s budget in more detail as we work to prepare a 2020-2021 General Appropriations Act for consideration in the Senate early next year,” Galvano said in a statement.

And while the budget grows again this year, it does so only by 0.4% — the smallest bump in recent years. This comes after the Legislature’s Office of Economic Demographics and Research projects less revenue over the next two years than initially thought on account of a possible economic slowdown.

“We are closely monitoring the next round of consensus estimating conferences, which will provide important updates in terms of anticipated needs in each area of the budget,” Galvano added. “We are also anticipating a new general revenue estimate, which will indicate if there has been a change in the amount of revenue available to meet those needs.”

Rep. Travis Cummings, the Fleming Island Republican who heads the House Appropriations Committee, called the small increase “refreshing” because it signaled a restrained and deliberate use of state funds.

“I think when we’re talking about raises across the board, whether its teachers or correctional officers, I think everyone deserves a raise, but we just need to look at what we have to work with after the revenue estimating conference.”

And Cummings’ Senate counterpart, also a Fleming Island Republican, Sen. Rob Bradley had a positive reaction in his preliminary statement.

“The Governor’s proposed budget reflects his priorities and is a nod to many priorities articulated to him by the Legislature,” Bradley said. “The table has been set for a productive session.”

Atop the Governor’s list of priorities is education, including his proposed replacement for the Best and Brightest bonus program. Republican House Speaker Jose Oliva’s office took to Twitter in support of the overall budget but remained hesitant to praise the new teacher-pay program.

“While the details of his ambitious teacher-pay program remain obscure — not a small matter — his commitment to responsible spending is crystal clear. A solid base upon which to begin our budget discussions,” they tweeted.

Florida Department of Education Commissioner Richard Corcoran said the budget makes a “historic investment,” with $600 million in pay raises for nearly 60% of Florida’s teachers and a $300 million rewrite of the teacher and principal bonus program.

“We have a lot to be proud of for education in Florida yet we also have realities to face, realities that continue to repeat themselves for every generation of students,” Corcoran said in a statement. “Florida has the best teachers and principals in the nation and I am proud to support the Governor’s proposal to increase the minimum salary and new teacher and principal bonus programs.”

But the Florida Education Association shot back with its own plan, including a $614 per student increase of base student allocation, after criticizing the Best and Brightest replacement Thursday. The Governor’s plan would increase the funds by $50 per student.

Another stated priority for DeSantis was the environment, including $2.5 billion over four years for water resource protection and $322 million for Everglades restoration projects. Among the $4 billion in environmental funding is $625 million in recurring dollars for the two areas.

“Ambitious action is needed now to reduce our reliance on dirty fossil fuels and expand investment in clean, renewable energy,” Moncrief said. “I urge the Legislature to build off the Governor’s recommendations and create a budget that truly protects the future of Florida.”

But the Everglades Foundation, which backed DeSantis’ campaign for Governor, praised the plan in a statement from CEO Eric Eikenberg.

“The funding included in the Governor’s budget proposal is significant and I thank him for being an environmental champion for our state – especially at a time when we needed a leader on this issue – and for crafting a proposal that will have far-reaching and positive impacts throughout our state.”

The Florida Department of Business and Professional Regulation too lauded the budget, with Secretary Halsey Beshears saying it creates employment opportunities and an improved business climate in a prepared statement.

“With this direction, we will maintain focus on regulatory reductions and operational advancements that are essential to creating careers, building businesses, and enhancing professional opportunities throughout our state,” Beshears said.

Florida Department of Children and Families Secretary Chad Poppell called the budget proof of the Governor’s “unwavering commitment” to children. The plan outlines $20 million for post-adoption services and an $11.7 million quality assurance program in the child welfare system.

“In partnership with Florida’s child welfare stakeholders, DCF will implement a strong system of accountability and optimal funding for all of our community-based care lead agencies, ultimately achieving the department’s goal of reducing the number of families in crisis by 20 percent by Summer 2021,” Poppell said.

The Florida Department of Edler Affairs Secretary Richard Prudom chimed in with praise for the DeSantis budget, which includes $10 million to create a Dementia Care Coordinator, provide Alzheimer’s care to an additional 250 people and provide adult day care services to 590 more.

“Through his Bolder, Brighter, Better Future budget recommendations, the Governor is making Florida a model as an Age-Friendly and Dementia-Caring State where seniors are cared for and protected from abuse, neglect, and exploitation,” Prudom said.

Also included in the budget is $6.6 million requested by Secretary of State Laurel Lee for election security infrastructure projects and to prevent voter fraud.

“Accurate and fair elections are the cornerstone of any free society and ensuring fair and accurate elections is the highest priority of the Florida Department of State,” Lee said.

The budget would give $9.9 billion to the Florida Department of Transportation, including $2.8 billion for highway construction, $436.2 million to repair or replace bridges, $119.7 million for port improvements and $323.9 million for aviation improvements.

“The budget provides infrastructure funding that will allow (FDOT) to continue to reduce congestion for all motorists and set Florida apart as a national leader in multimodal transportation,” FDOT Secretary Kevin Thibault said.

Democrats had not responded by the time of publication.