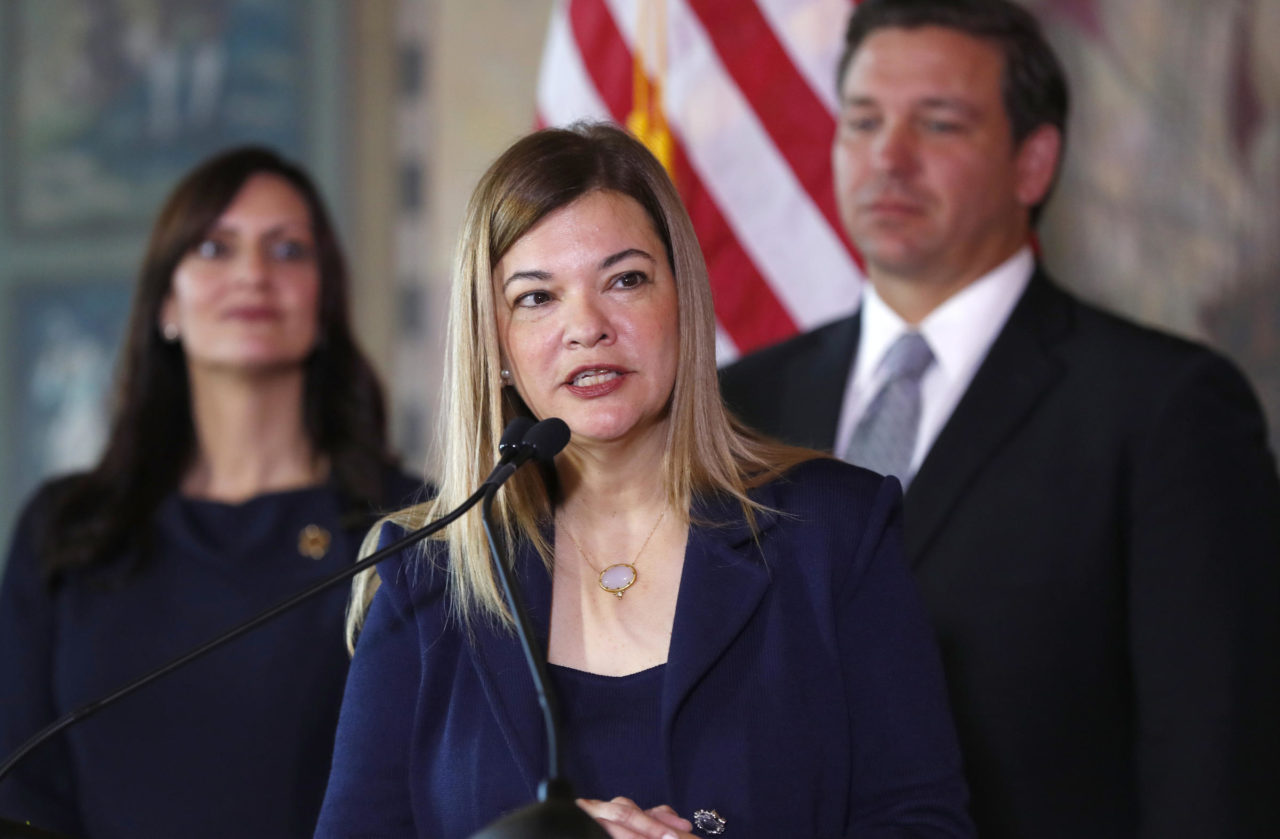 Gov. Ron DeSantis is now positioned to make his fifth Supreme Court pick in under a year of being in office.

On Wednesday, the U.S. Senate confirmed Barbara Lagoa to the 11th U.S. Circuit Court of Appeals by an 80-15 margin.

Lagoa is the second Florida Supreme Court justice to be federally confirmed this week; Robert Luck was confirmed Tuesday.

Lagoa and Luck were two of DeSantis’ first three picks, made earlier this year and already headed out.

Carlos Muniz, the third, remains on the court.

The Miami-born Lagoa, 51, was first appointed to the bench by Gov. Jeb Bush in 2006. She previously was chief judge of the 3rd District Court of Appeal in Miami, a capacity in which she heard over 11,000 cases.

Before that, she handled civil and criminal law for the powerhouse Greenberg Traurig firm.

The Governor and his staff have had months to prepare for the new openings, as they continue to move the court in a conservative direction.

Gov. DeSantis, at the time, credited the President with “great judgment” for the picks. while crediting Lagoa and Luck with “demonstrated understanding of the Constitution and the appropriate role of the judiciary.”

They will hear appellate cases from Alabama, Florida and Georgia, and are expected to move the court more toward a textualist, Federalist Society skein.

Reaction poured in from leading Republicans on Wednesday afternoon.

“I thank Justice Lagoa for her years of service in both the federal and Florida state justice systems, including as a Justice on the Supreme Court of Florida,” Sen. Marco Rubio said. “I am confident Justice Lagoa’s experience will serve her well as she begins the next chapter of her service to our nation as a U.S. Circuit Judge for the Eleventh Circuit.”

“An experienced jurist committed to the rule of law, Judge Lagoa has served Florida honorably. She made history as the first Cuban-American woman appointed to Florida’s Third District Court of Appeals and the Florida Supreme Court where she authored more than 300 majority opinions. I am confident she will preside honorably over the U.S. Court of Appeals of the 11th Circuit,” asserted Attorney General Ashley Moody.

Congratulations to Justice Barbara Lagoa, who just received confirmation by the U.S. Senate to serve on the 11th Circuit federal appeals court. Justice Lagoa has been a trailblazer in Florida and will be a great federal judge.

Congrats to Justice Barbara Lagoa on being confirmed to be a U.S. Circuit Judge for the Eleventh Circuit!

She was the first Cuban-American to be appointed to the Florida Supreme Court last year and I look forward to her continued service to our state and our country! https://t.co/PK6C6mA7e1

Congratulations to Justice Luck and Justice Lagoa for receiving confirmation to sit on the US Court of Appeals for the 11th Circuit. You both have been exemplary legal professionals with unprecedented dedication to the judicial branch that will serve our federal courts well.

DeSantis appointed Luck, Lagoa and Justice Carlos Muñiz to the Florida Supreme Court shortly after the he took office in January. The appointments filled three vacancies created when justices Barbara Pariente, R. Fred Lewis and Peggy Quince were forced to step down after reaching a mandatory retirement age.

The openings provide DeSantis an opportunity to infuse some diversity onto the seven-member Supreme Court.

“It’s very important for our judicial system to reflect the people who come before the courts. It is an underpinning of the trust and confidence they have in the process and the entire administration of justice, when they can identify in ways with people on the court,” Martha Barnett, a Tallahassee lawyer who is a former president of the American Bar Association and The Florida Bar, told The News Service of Florida in a telephone interview Wednesday.

This week’s Senate confirmations of Luck and Lagoa set in motion the process for the Florida Supreme Court Judicial Nominating Commission to provide a list of names for DeSantis to consider in filling the vacancies.

A year ago, the nominating commission dismayed some state court-watchers and civil rights advocates with its list of 11 finalists to replace the three retiring justices.

The list included two women: Lagoa and Jamie Rutland Grosshans, a judge on the Daytona Beach-based 5th District Court of Appeal. But none of the nine jurists and two lawyers nominated by the commission were African-American, although six of the original 59 applicants were black.

The absence of a black justice on the highest court in the nation’s third-largest state, which has more than 3.5 million African-American residents, drew sharp criticism.

“It’s not a good day for the judiciary of the state of Florida when you’re going to look up there (at the Supreme Court bench) and not see anybody who is black after 36 years,” former state Sen. Arthenia Joyner, a Tampa lawyer and longtime civil- rights leader said last November. “What message are we sending to our kids? That it’s a complete reversal of going back to the days of segregation?”

DeSantis spokeswoman Helen Ferré said Wednesday that half of the governor’s judicial appointments are women and about 40 percent “are from a diverse ethnic or racial background.”

“The most important consideration for Gov. DeSantis in considering an appointee to the courts is their firm commitment to the Constitution, the rule of law and the understanding of the limited role of the judiciary,” she said in an email.

Barnett, however, stressed the need for the nominating commission to provide options for DeSantis that reflect the state’s diversity.

The various nominating commissions, which make recommendations for judicial appointments to other courts as well as the Supreme Court, are responsible for considering “the intellect, the integrity, the experience, the temperament and the core qualifications” of the people they’re screening, Barnett said.

“But the appointing authority (the governor) has to bear in mind that he or she represents all of the people and that it’s important to have quality, qualified individuals that reflect the populations that are impacted, which means our entire state population,” she said.

The commission will conduct interviews before recommending three to six finalists for each opening, Daniel Nordby, the commission’s chairman, told the News Service this week.

DeSantis recently said he expects to fill the vacancies early next year.