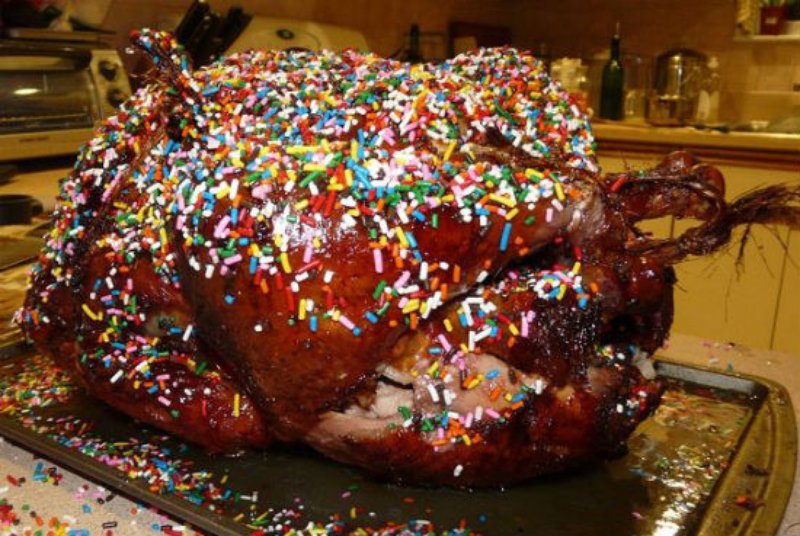 This year, consider the handful of people who may be thinking outside the Thanksgiving tradition box and trying out one of these off-the-wall recipes.

Thanksgiving Day gluttony is, for the most part, expected to be pretty predictable. We’ve already covered the main event, the succulent bird and savory side dishes, but now it’s time for the equally important dessert and onslaught of leftovers — in a very weird way.

No Thanksgiving is complete without a tasting of every single dessert put out on the table. It doesn’t matter how many buttons you’ve undone from your jeans or if you’ve intentionally donned your Thanksgiving fat pants, this dessert is one that is entirely unnecessary. So, why stop at apple and pumpkin pie? This year, consider the handful of people who may be thinking outside the Thanksgiving tradition box and trying out one of these off-the-wall recipes.

Yep, that’s right. Moose turds. Yum! No really, yum. These not-so-tantalizing looking treats are, in fact, a chocolaty slice of heaven — so long as you can get past the fact that they do, indeed, look like a pile of some large and disgusting animal’s poop.

Moose Turds consist of the usual cookie necessities like butter, eggs and brown sugar, but they also include a, eh-hem, crap load of chocolate and a little bit of booze, triple sec or Grand Marnier. There’s also some mashed banana. Again, yum.

This fabulous dessert can be topped with red and green sprinkles for Christmas and renamed reindeer turds. You drop that deuce Rudolph!

Love your traditional holiday pies but feel guilty about eating a slice of each? Well, how about combining three of the most widely baked Thanksgiving pies into one cake to disguise your overindulgence? Enter the Cherpumple — a cherry pie, pumpkin pie and apple pie all baked into one ginormous cake.

Each pie is baked into a cake — take your pick of white, yellow, spice, whatever — then stacked on top of each other and frosted all together into one diabetes-inducing dessert.

This giant slice of awesome goes particularly well with Thanksgiving adventurers who have mastered the Turducken and love lots of things crammed into one thing.

The original creator of the Cherpumple no longer has the recipe page up — I assume there were one too many sugar-induced comas to answer for. Rest assured any pie recipe should do the trick and boxed cake batter is pretty self-explanatory.

No, this chocolate cake won’t thrust you into the therapist’s office with a bout of holiday depression, that comes from other holiday-related stress. It’s called Depression Cake because it was created in the days of the Great Depression when many ordinary cake ingredients like milk, eggs and butter got pricey following the 1929 stock market crash. This cake satisfied the financially strapped families then by avoiding dairy and eggs and it’s perfect for your vegan friend who can’t each much else at the Thanksgiving table.

Depression Cake contains the usual all-purpose flour, white sugar, salt, baking soda and cocoa powder, but substitutes vegetable oil, white vinegar and water for the dairy and egg. The result is a moist and fluffy cake that rivals what you might make compliments of Pillsbury. Sprinkle it with some powdered sugar and you’ve got a delicious chocolate cake that’s pretty and safe for your dietary-challenged friends and family.

Well, crap. Thanksgiving is over and you’re left with a fridge full of 17-days worth of leftovers you have maybe five days to eat. What to do with this little first world problem?

The whole thing sounds delicious, except for the marshmallows. Ick.

When leftover turkey starts getting old for lunch and dinner, just switch it up for breakfast. Your taste buds won’t even notice you’re eating the same thing you had for the past three days!

This recipe calls for leftover turkey and Brussels sprouts and a handful of extra ingredients like heavy cream and Mexican chorizo, but I’m sure you could manage to mix in some extra stuff to get rid of it — green beans, broccoli, cauliflower, just chuck it all in, right!

The chef of this post-Thanksgiving breakfast calls on the cook to cut everything to about the same size to ensure even cooking. Let the ingredients form a crust on the pan and constantly scrape that crust to make a crispy hash. When it’s pretty much cooked, create little nooks for eggs to cook into an over-easy yolky goodness. Top it with hot sauce and sriracha and bada-bing bada-boom, leftover turkey that tastes nothing like Thanksgiving!

One recipe calls for a triple-decker turkey sandwich with the middle slice of bread soaked in gravy — emphasis on soaked in gravy. The bottom is sliced leftover turkey, lettuce and tomato and the top is leftover stuffing and cranberry sauce.

Yet another turkey sandwich rendition throws a smashed dinner roll into the mix with a layer of green beans and sweet potatoes. There’s still cranberry sauce, of course.

Why not go fancy with a Panini-style turkey sandwich with melted Brie and avocado. This leftover masterpiece grills layers of turkey, cranberry sauce, avocado and Brie cheese in between artisan bread for a crunchy sweet and salty concoction sure to put a plain turkey and mayo on wheat to shame.

A similar version of that recipe swaps the Brie for Goat cheese and takes out the avocado. Either way, I’m ready for Thanksgiving.

The fat pants (and an extra couple pair) are ready for the feat(s).