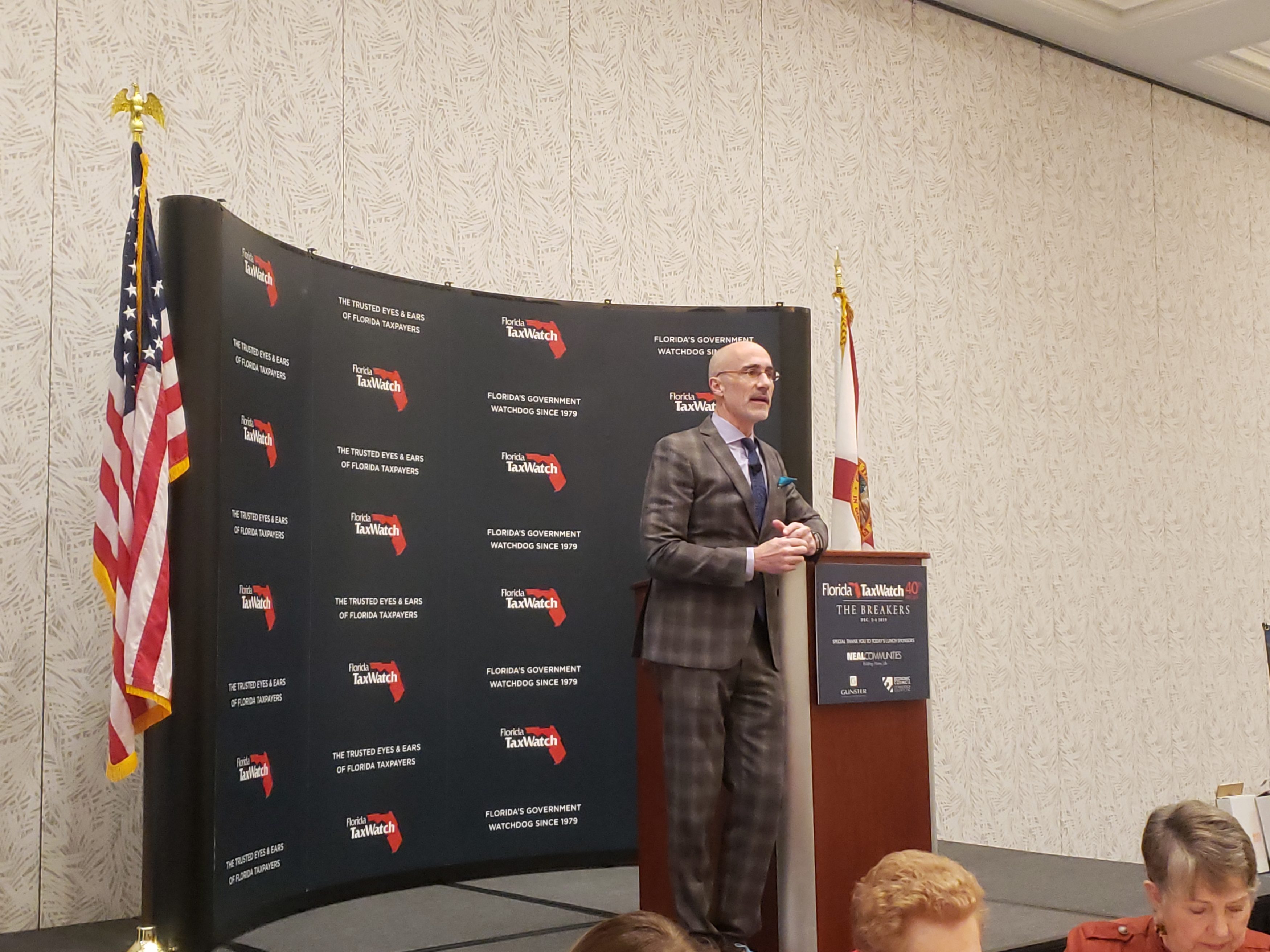 Brooks offered the keynote speech for the group Tuesday afternoon.

Arthur Brooks is the former President of the American Enterprise Institute (AEI), a conservative-leaning think tank. Tuesday, he spoke to Florida TaxWatch — a business-backed taxpayer watchdog that often advocates for conservative fiscal restraint in the state budget.

But those politics were irrelevant to Brooks’ keynote speech. In fact, they were anathema. Rather than preach to the ideological choir, Brooks used the opportunity to highlight the issue of political polarization in America and urge attendees to do their part to stop it.

“One of the key things to understand about policy is when you have an old problem, it’s not gonna be solved by thinking harder in the old way,” Brooks said at the top of his talk.

“You need a new way. You need a breakthrough. You need an epiphany to figure out how to solve old problems.”

And Brooks sees the long-developing problem of polarization as in need of a new way of thinking.

Americans have become more ideologically split over the decades, according to Pew Research Center. But Brooks argues a separation in policy positions isn’t the prime driver of the conflict.

“When you have an intractable conflict between groups of people, it’s almost always because each of them sees themselves as motivated by love, but the other side is motivated by hatred. That makes hostility impossible to solve,” Brooks said.

“Look, if I’m motivated by love and you’re motivated by hatred, we’ve got nothing to talk about. I’m good, you’re bad. And when both sides think that, you’re going to have permanent conflict.”

He sees that divide is amplified by many politicians, and highlighted the 2020 presidential contest as a prime example.

“When you go to a place where a bunch of people are running for President, what do they do? They get in front of a completely sympathetic group and they say two things: you’re right and the people who disagree with you are stupid and evil.”

Brooks’ speech came just days after Thanksgiving. And he used the proximity to that holiday, often a center of politically-opposite family members coming together, to ask the audience if they love anyone in their life with whom they disagree politically.

Everyone in the room raised their hand.

That prompted a question from Brooks.

“Why would we let some talking head on television, some politician, trash our sister-in-law?” he asked.

“Why would we do that? That’s ripping apart the fabric of our communities and actually tearing apart our own values.”

The former AEI President, who now teaches public policy at Harvard, argued the problem is not disagreement, but contempt.

That is, holding different views from one another doesn’t necessitate outrage and polarization, he argued.

“I don’t want you to agree with people,” Brooks said. “Agreement leads to mediocrity in a competition of ideas.”

In his view, competition in politics, the economy and other areas leads to the best ideas surfacing to the top. As he admitted, he has a center-right view on those topics.

And showing contempt for differing ideas, he said, is being seen as a courageous move by more and more people. In his mind, that’s the reverse of how things should be.

“That’s hard to do, standing up to your friends. And yet you know perfectly that in a country that’s being torn apart by polarization, that that’s exactly what we need to do.”

The speech was a stark change for a dayslong conference that largely focused on varying tax and regulation policy issues. But Brooks pushed the crowd to be more discerning in how they debate those issues going forward.

“I realize that we have ideological differences. We have major policy differences. But we can get over those things,” Brooks said.

“What we can’t get over is the unspoken statement that you’re worthless and your ideas mean nothing. That’s the habit we need to break.”

So what did Brooks put forward as a solution?

“When you’re treated with contempt, you have to decide consciously to react in a different way. That’s the answer.”

He said it’s hard to break old habits, but that in can be done with a deliberate effort. Brooks closed the speech by offering three ways to achieve that goal.

First, he urged the audience to disregard politicians and media sources who profit off dissension. He dubbed that sector the “outrage-industrial complex.”

“There are some people who really like the fact that there’s a lot of hate in this country,” Brooks asserted.

He then gave the audience an assignment.

“There’s a bunch of people out there, you can think of them, that are trying to set person against person,” Brooks said.

The second change Brooks suggested is aiming to “answer contempt with warmheartedness, and in so doing, to neutralize that conflict. Why?

“Because what are the benefits? Remember, nobody’s ever been insulted into agreement.”

Finally, Brooks backed the idea of not only treating those with which you disagree with compassion, but actually showing gratitude toward them.

“I was talking to a big conclave of Republican politicians in Washington, D.C. And I asked them a question. I said, ‘How many of you wish we lived in a one-party state like Venezuela or Cuba?’ No hands, of course.

He continued, “I said, ‘How many of your are grateful that we have a multiparty, at least two-part democracy?’ All hands. I said, ‘You just told me that you’re grateful for the other side.’

Brooks then wrapped his point, and his nearly 45-minute speech.

nextSpecial report: To save Everglades, guardians fight time — and climate