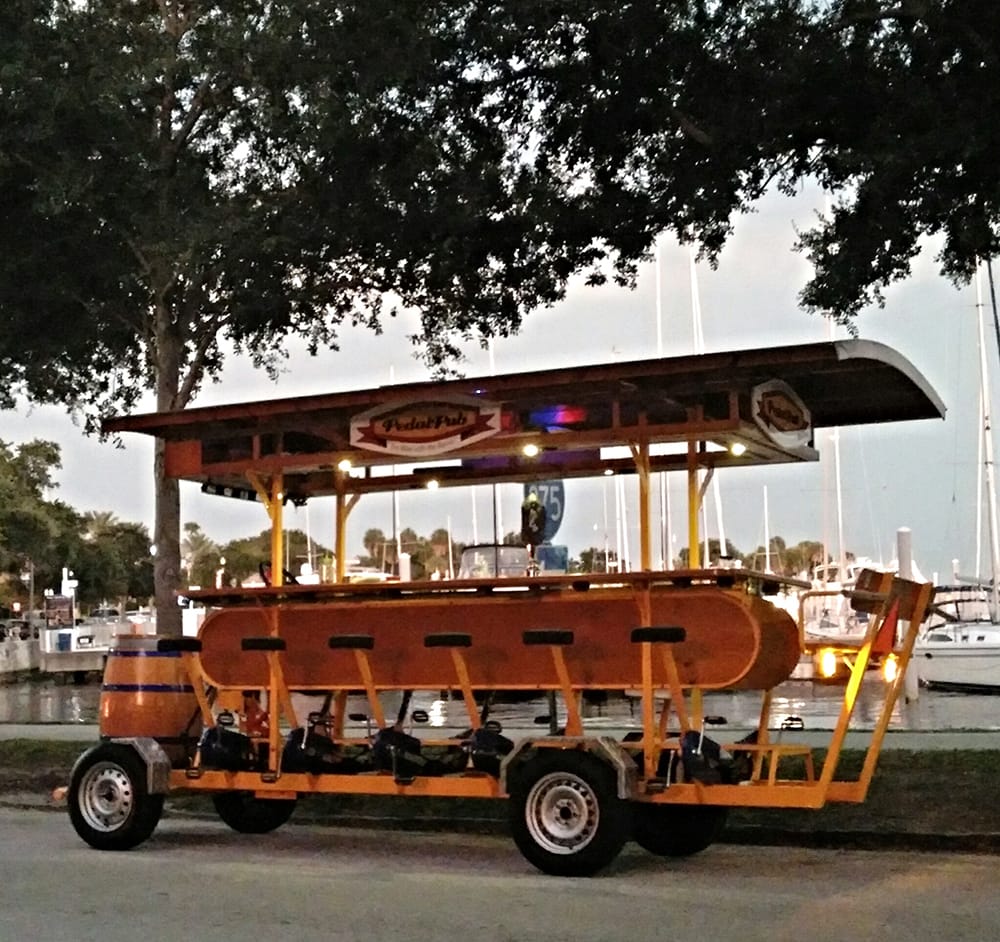 "If they’re going to be there, you ought to have alcohol ..."

The Clearwater City Council voted 4-1 Thursday night against an ordinance that would have allowed pedal pubs to operate but without alcohol. Mayor George Cretekos cast the lone dissenting vote.

Councilmember Hoyt Hamilton proposed a motion to rewrite the city’s ordinance to allow people on commercial megacycles to drink beer and wine.

“These are called pedal pubs for a reason because it’s customary and common with these vehicles to have alcohol on board,” Hamilton said. “I know the mayor is against these all the way around because of our beach community, but I look at our beach kind of as a…in a different light in that we’re the No. 1 beach for many reasons, one of which is the diversity of what we have out there.”

Commercial megacycles are also known as pedal pubs. They allow groups of people to drink alcohol while cycling together on a road. A driver for the company operating the pedal pub abstains from drinking and steers it.

“This is just another offering that our market has an opportunity to provide,” Hamilton said of the pedal pub proposal.

Cretekos said he opposes the pedal pubs on the beach.

“I agree, if they’re going to be there, you ought to have alcohol, but I don’t agree that they need to be there.”

In addition to Hamilton, councilmembers David Allbritton and Jay Polglaze voiced their support of allowing the pedal pubs with alcohol at Clearwater Beach.

“I’ve been in other cities around and people actually have a lot of fun on these things, and it’s not a raucous thing. There are families,” Allbritton said. “I’ve seen them go up and down. I’ve also seen them in the cities where they don’t have alcohol, but not as bouncing from pub to pub, more like a tour where they’re pointing out historic landmarks. That kind of thing. Then, maybe at night, it turns into a pedal pub.”

Business owner Clayton Irwin told the city council he conducted a survey to see how people would feel about not having alcohol on the megacycles.

“I don’t think I found one person that said, ‘Oh yeah, that wouldn’t bother us at all,’” Irwin said. “The whole part of the program is to have a beer or a glass of wine while you’re on the party bikes, and while you’re going around seeing the city, pedaling.”

Irwin said he would not be able to move forward with his pedal pub business in Clearwater unless the pilot program allows beer and wine. He said he would like to see the 16-passenger pedal pubs receive the same alcohol exemptions as limousines.

Cretekos said he would be open to allowing Irwin to conduct a pedal pub trial period with alcohol on board in downtown Clearwater, but not Clearwater Beach.

Clearwater Police Chief Daniel Slaughter said his concern is trying to maintain a family-friendly atmosphere at the beach.

“We already have plenty of legal opportunities for people to partake in alcohol,” Slaughter said. “There’s always this conversation that this person [business owner] will be responsible for governing and controlling it, but it’s going to be a business.

“Once it gets thrown out there to start, it’s going try to survive. And whether people are getting a little bit out of control, people are going to whatever they got to do to keep the business model running and to make money.”

While Slaughter agreed with Cretekos in not allowing the pedal pubs with alcohol at the beach, he said the police department is an implementer of policy and not a maker of policy.

“Whatever the council decides tonight we’ll be more than happy to implement and with success,” Slaughter said.

During Thursday’s meeting, the five-member city council did not take a formal vote on allowing pedal pubs with beer and wine onboard.

The city council could vote in January on a six-month megacycle pilot program. If approved, it is not yet known how soon pedal pubs could begin operations in Clearwater.

“I just want the city to kind of like give it a shot, and if you guys tell me later down the road, ‘this is not going to work out for us,’ either you pull the alcohol or get the bikes off the beach, and that’s where we’ll go from there. I’ll find another market for it,” Irwin said. “But this the market I want. This is where I live. I’m very passionate about the city as you all know.”

Beer and wine would be allowed on the megacycles, but not hard liquor.

Irwin was the only commercial megacycle business owner the councilmembers heard from on Thursday.

Had Thursday’s ordinance passed, it would have allowed the megacycles to operate on the roads in downtown Clearwater and Clearwater Beach, but not at the main roundabout just east of Pier 60. A diagram shows the designated routes both north and south of the roundabout.

Pedal pubs are allowed in cities throughout the country and in Florida, including St. Petersburg and Naples. However, the Sarasota City Commission voted against a pedal pub proposal in October. 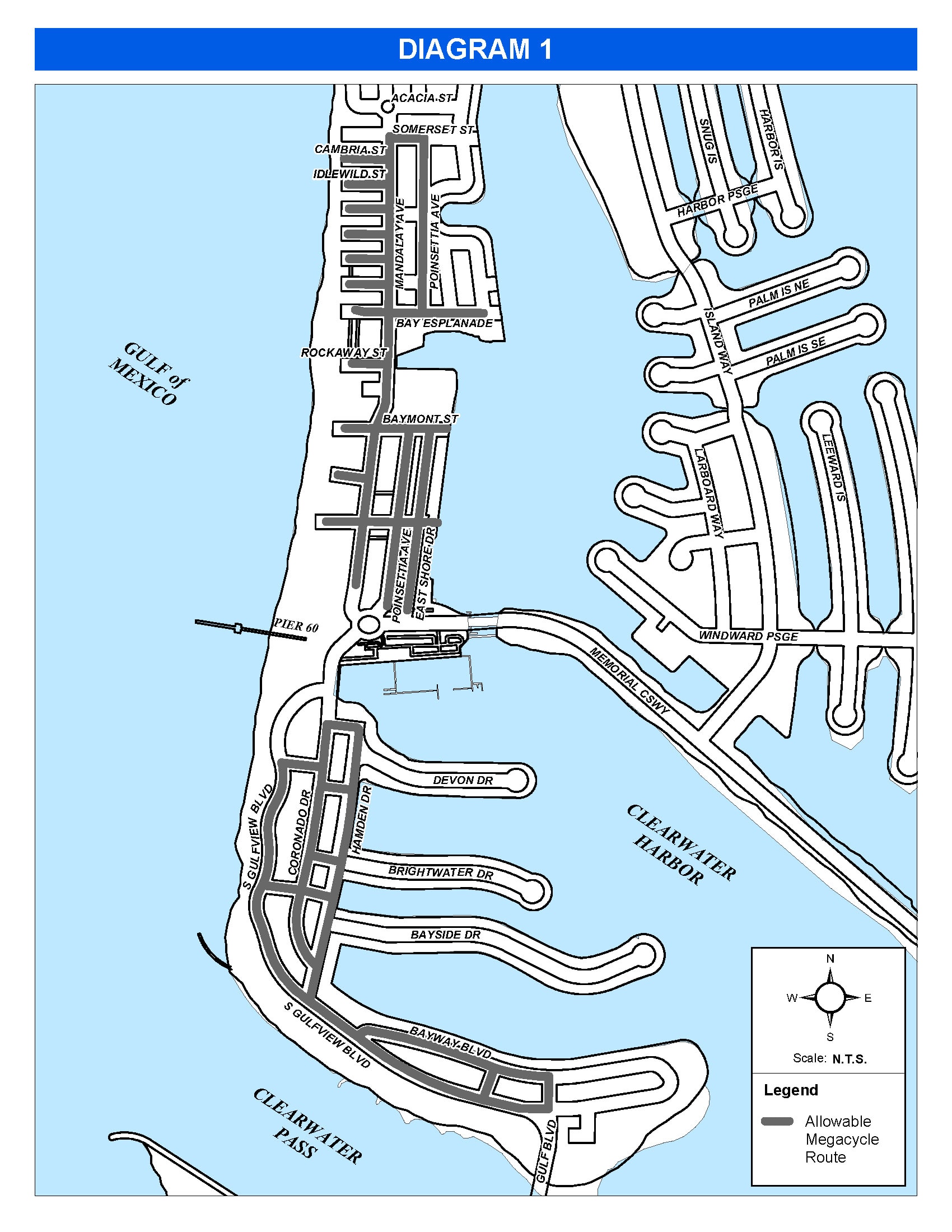