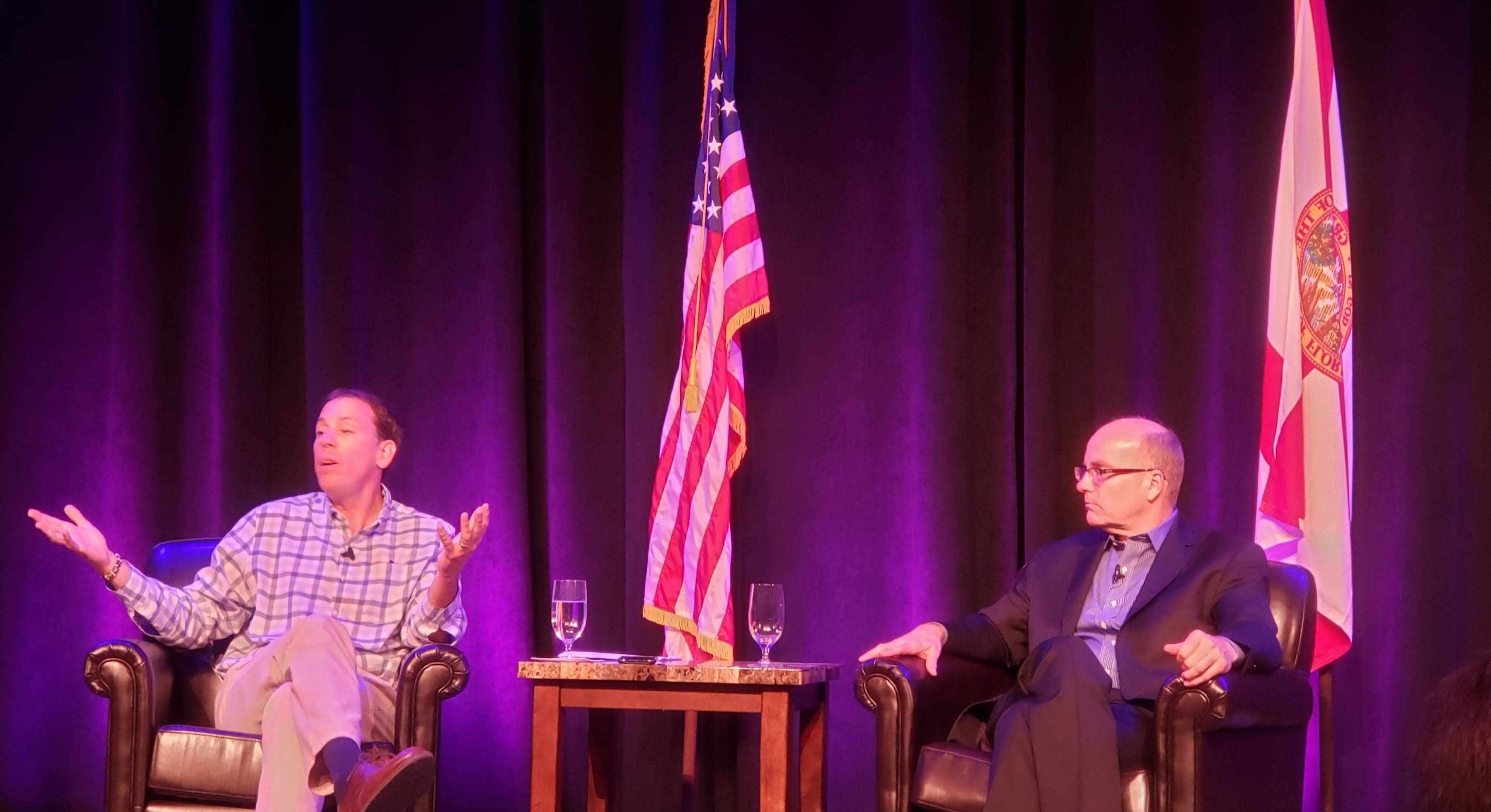 The Axios co-founders spoke at a Forum Club of the Palm Beaches event Monday.

Jim VandeHei led off a Monday talk in Palm Beach sounding confident about the age of information that has been created by the development of the internet.

“Rich or poor, you have access to more information about any topic facing humanity — in any nation, about any nation — in text, audio or video for free because of the internet,” VandeHei told the audience at a Forum Club of the Palm Beaches event Monday.

“Everybody in this room has the ability to recall facts and figures that would make a Jeopardy champion blush thanks to Google, for free.”

But VandeHei argues that breadth of information actually has the potential to cause more harm than good.

“We all should be getting smarter faster. So why is everyone getting dumber quicker?” VandeHei asked.

The longtime journalist was on hand Monday with his Axios co-founder, Mike Allen. He and Allen also cofounded POLITICO in 2007. The pair moved on to found Axios in 2016.

VandeHei says that with the abundant amount of information available online and in the media at large, it’s too easy to find information that simply offers confirmation bias.

That leaves plenty of room for individuals to seek out information buffing up what they already believe and potentially allowing the public to avoid expanding their knowledge base.

“It should be information utopia,” VandeHei said of the modern age. “But yet it feels like an information dystopia.”

The two were on hand for the first Forum Club speech of 2020. The organization invites high-profile speakers to appear at events each month throughout the year.

“The press made a lot of mistakes in 2016,” Allen said. “But I think one of the biggest ones was: we didn’t listen enough.”

Allen says that recognition made him thankful for events such as Monday’s talk with the Forum Club, where audience members were offered time to question the duo on the media landscape writ-large.

But Allen also argued the issue of misinformation has gone all the way up to the presidency. He offered a pair of narratives often circulated about — and from — Donald Trump that Allen says simply aren’t true.

“I’m going to debunk a couple things about your neighbor,” Allen said, alluding to Trump’s newfound residence at Mar-a-Lago.

Allen cited several interviews he and VandeHei have conducted with Trump as support for Trump’s fondness of the presidency. Allen also mentioned Trump’s fascination with the White House and Air Force One to support his claim.

“The other thing that we can debunk is this idea that the President promotes: that he hates the press and that he’s always hated the media,” Allen said.

Allen argued that notion “couldn’t be less true. The idea of hating the press, the idea of the press is the enemy, there’s very much a WWE/WWF convention to that.”

Allen added of Trump, “A lot of the ways that he built his name, built his fortune, is in courting the media.”

Trump has a penchant for dissing negative coverage of his administration. But while Allen argues those attacks are performative, the echo chambers created by our current media landscape allow that sentiment to percolate among his supporters.

That can lead to situations like we saw in 2018, where a South Florida man ended up sending faulty pipe bombs to media figures and leading Democratic politicians across the country.

VandeHei also pointed to the spread of misinformation via social media. He challenged the audience to help push back against the spread of fake stories online by working to find trustworthy sources and limiting interaction with friends online who spread misinformation, among other suggestions.

But with another election on the horizon this year, VandeHei warned that the current divide among news consumers is not sustainable.

“We have 60 percent in this country that doesn’t believe almost anything that our industry produces. And certainly some of that is on us and I can go through a litany of mistakes that I think the mainstream media has made. But this is a huge problem. We can’t end up in a place where we don’t even have any shared set of facts,” VandeHei argued.

“If we don’t get this right as a country, we’re screwed.”

nextKen Wilkinson, author of Save Our Homes, to retire as Lee Property Appraiser