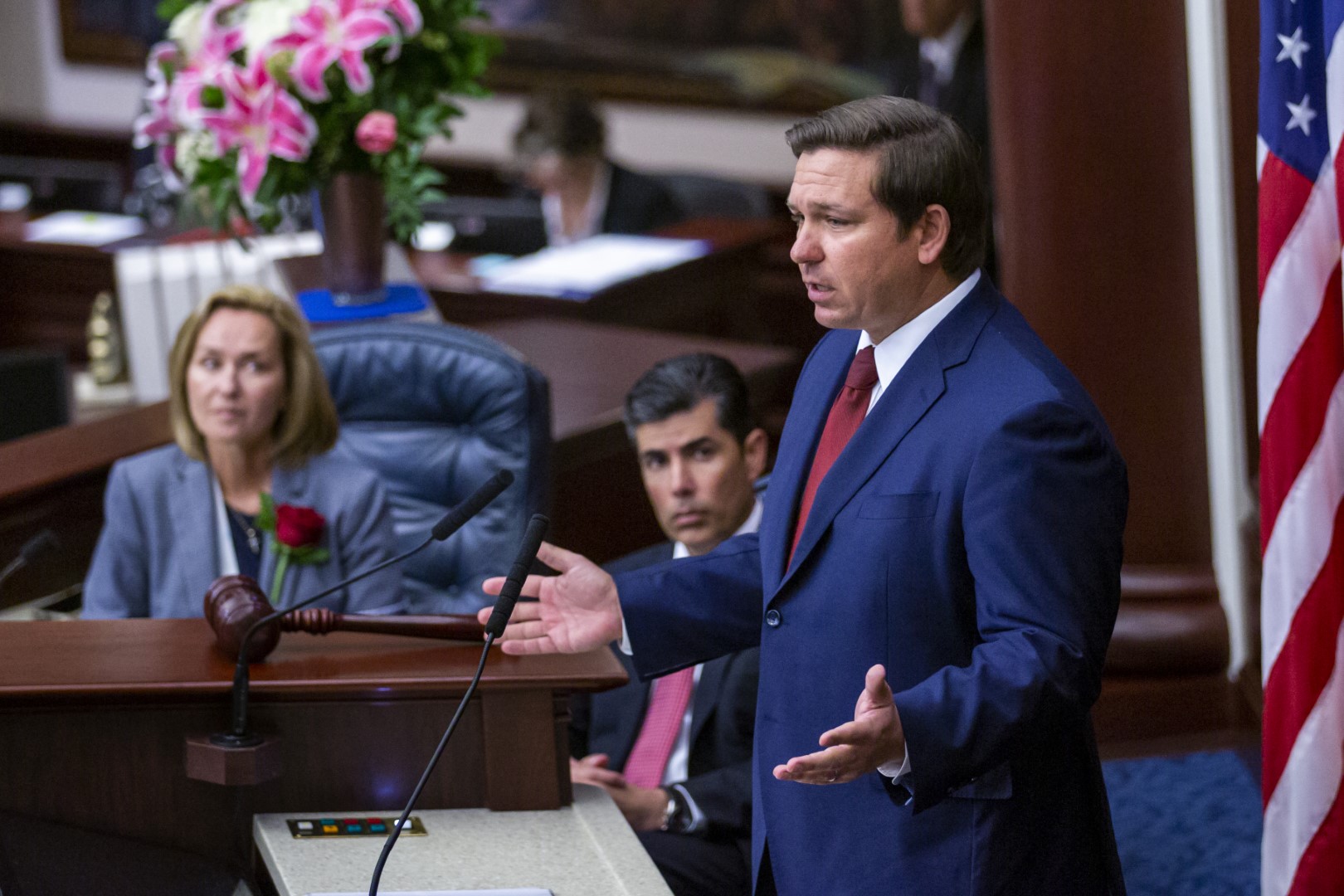 Gov. Ron DeSantis kicked off his second Legislative Session with the State of the State speech, themed around a ‘season of opportunity.’

He looks to push several initiatives in a relatively flat second budget. The $91.4 billion budget proposal is a mere 0.4% increase year over year that does not keep pace with population growth.

DeSantis, who reminded lawmakers that the Constitution required him to give this speech, took stock of “accomplishments.”

“In 2019, we took bold steps to expand educational opportunities, protect our environment and natural resources, reform health care, invest in infrastructure and bolster public safety — all while reducing taxes and adding to our budget reserves,” the Governor noted.

However, he added, “we have much more to do.”

Some of that will be red meat for social conservatives, such as on the abortion issue: “I hope that the parental consent bill will make its way to my desk during this session!”

That bill would require minors to have parental consent before abortions, and it looks poised to be passed by both the House and the Senate fairly expeditiously.

However, much of the rest of the speech was somewhat less controversial.

“Maintaining fiscal health will provide the type of durable foundation required for the expansion of our economic base, which means more opportunities for the people of Florida,” the Governor added.

The Governor also called for more legislative action on water quality issues, urging “fund[ing] water resource projects at the $625 million level on a recurring basis for three years. This will provide needed certainty for these key initiatives and will help us leverage more federal support.”

This is consistent with his budget asks. The Governor advanced a number of proposals, including $300 million for the Everglades, more money for water quality improvements ($200 million over four years), $100 million for Florida Forever, $280 million for water storage and $50 million for beach restoration.

DeSantis also wants water quality legislation passed, and he delivered a message to locals that haven’t dealt with septic issues.

“Too many municipalities have failed to invest in needed upgrades to their water infrastructure in part because it is cheaper to violate the law and pay a nominal fine. This is unacceptable and needs to change,” the Governor noted.

The Governor also remarked on the importance of “workforce education,” while urging for the streamlining of occupational licensing requirements.

“Once Floridians acquire skills, it is important that they be allowed to employ those skills without unnecessary barriers placed in their way by government. Florida’s occupational licensing regime too often hinders upward mobility — often for lower-income workers — because so much of the regime is based not on the legitimate goal of protecting public health and safety but on keeping people out, creating a guild that benefits insiders at the expense of those seeking to enter moderate income professions ranging from barbers to interior design,” DeSantis noted.

And despite resistance from the House and education unions, the Governor is holding to his proposal to raise teachers’ salaries to $47,500, in what he has called The Year of the Teacher.

“I am recommending we take a bold step of setting a minimum salary for public school teachers at $47,500, bringing Florida from the bottom half of states to number 2 in the nation. This will make it easier to get talented college graduates to enter the profession and will help us retain many of the good teachers we have now.

Critics of that proposal, many of whom descended on Tallahassee Monday, argue DeSantis’ proposal leaves out veteran teachers and support staff.

The Governor also stressed E-Verify reform as a way to protect against foreigners taking American jobs. A new compromise reform proposal would require citizenship verification for government employees as well as those of governmental contractors.

The victory laps were not over, however, regarding the 2019 Session.

“One major initiative was to provide access to cheaper prescription drugs by bringing in safe, name-brand drugs from foreign markets such as Canada … This can only be done with federal approval and I’m happy to report that the Trump administration is moving forward with the applicable regulations. There is still a long way to go, but that we are even discussing this is a major development in this area, and Florida has led the way,” DeSantis noted.

Even as the federal rulemaking continues, the Governor wants $20 million for the program’s startup.

The speech was laden with historical references, from Christopher Columbus to Alexander Hamilton, the latter name reminiscent of the frothing drama of the race against Andrew Gillum in 2018.

And while some did critique the delivery, with DeSantis staring down to look at notes often, that won’t be remembered past today. The measure of the speech over the next 60 days: how much of this agenda gets through the Legislature?

2019 was a strong start. Can DeSantis do it again though?

In this article:Best and the Brightest Program, E-Verify, Ron DeSantis, State of the State, teacher pay