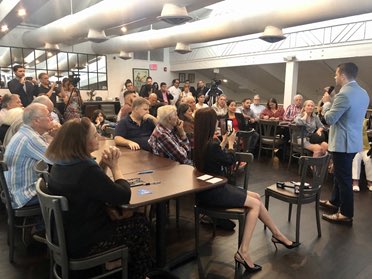 A host of Trump Victory events took place across Florida Saturday, tied to a National Day of Action.

There, the Republican leaders pushed a message about the state’s low 3.1% unemployment rate, it’s lowest level since 2006. And in an effort to reach the state’s Hispanic voters, the administration’s “steadfast support for democracy in Latin America” will be amplified.

Great support for President Trump in Florida during today’s National Day of Action with @MiamiYR & @TommyHicksGOP!#Millennials know that President Trump’s pro-America agenda is good for our Future, our Freedoms & our Families.

That was just part of the statewide push to activate the base in Florida ahead of what’s expected to be a tight reelection campaign.

“From empowering community leaders to our unrivaled data operation, we have established a deep-rooted network of volunteers who are energizing their peers across the state. We are confident that we will continue to see success at the ballot box come Election Day.”

“Celebrating 3 years since the best President ever, @realDonaldTrump was elected!,” tweeted Laina Moran, Republican Party of Sarasota executive director. “NDOA Training and then off to VR booths and door knocking.”

The Florida effort was part of a national effort to mobilize. It notably also comes weeks before the Republican Presidential Preference Primary in Florida on March 17, where Trump does face opposition.

previousNo astrovans for SpaceX, crews riding to rockets in Teslas

nextMatt Gaetz: The time is now for E-Verify across Florida