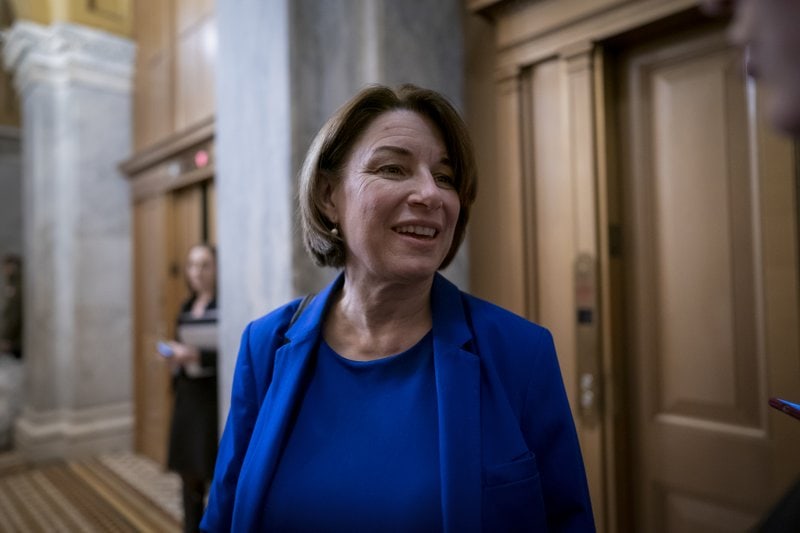 Amy Klobuchar is still fighting to gain ground in Iowa’s presidential caucuses that are now just days away.

The Minnesota senator took a last-minute, late afternoon flight to western Iowa on Tuesday following arguments in President Donald Trump’s impeachment trial in Washington. She made a campaign stop at a bar in Council Bluffs, where she was met by a standing-room-only crowd of more than 100 people.

She is among a handful of White House hopefuls making a final push in the Midwestern state before Monday’s first-in-the-nation caucuses.

While touting her recent endorsements — including those by The New York Times, as well as newspapers in Iowa and New Hampshire — she is facing new questions about her time as a top Minnesota prosecutor in the mid-2000s. Of particular interest is Klobuchar’s prosecution of black teenager Myon Burrell, who was convicted in the 2002 death of an 11-year-old girl struck by a stray bullet and was sentenced to life in prison.

Burrell’s case is getting new scrutiny after The Associated Press uncovered new evidence and myriad inconsistencies in his prosecution, raising questions about whether he was railroaded by police. Klobuchar is not the only candidate in the Democratic field to face scrutiny for his or her records on racial justice in the 1990s and early 2000s; former Vice President Joe Biden and former New York City Mayor Michael Bloomberg are among the others.

Klobuchar hasn’t directly addressed the Burrell case since the AP’s story on his case was published earlier Tuesday, but a campaign spokeswoman said Burrell was tried twice and convicted of the girl’s killing, and the second trial occurred when Klobuchar was no longer the prosecutor. The spokeswoman also said that if there was new evidence, it should be immediately reviewed by the court.

Klobuchar didn’t address the case in her campaign speech Tuesday night. But she did tell a story about a man mourning the death of President Franklin D. Roosevelt who said he felt the president “knew me.”

“That’s empathy for the people,” Klobuchar said. “That is what I will bring to you as president.”

Klobuchar’s speech focused heavily on criticism of Trump, from tariffs hurting Midwestern farmers to an unwillingness of the administration to address the skyrocketing costs of health care and medication.

Regarding the impeachment, Klobuchar said she sits across the aisle from Senate Republicans and wonders what they must be thinking, especially in light of new reports that former national security adviser John Bolton wrote in a new book that Trump told him he wanted to withhold military aid from Ukraine until the country helped with investigations into Biden, one of his Democratic rivals in the 2020 election.

“I think, ‘How can this not disturb you?’ You have the guy in the room where it happened,” she said, echoing the title of Bolton’s forthcoming book.