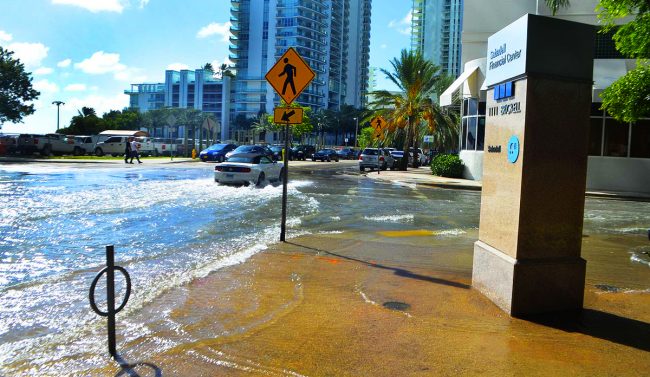 The forecast for the Super Bowl in Miami is grim.

Clear skies and temperature in the 60s are expected when the game kicks off, so weather won’t be a problem.

But climate change likely will be, sooner or later. The sea and temperature are rising, posing a threat to South Floridians’ way of life, including their customary spot in the NFL’s Super Bowl rotation.

The game will be played Sunday in Miami for the 11th time, the most of any city. Given the changing climate, how much longer will the region be a place where the NFL wants to bring its big party?

“In 10 years maybe we’ll still be functioning normally,” said Harold Wanless, a leading expert on sea level rise in South Florida. “Twenty years? I think that could be a problem.”

The Miami Dolphins’ stadium, the site of the Super Bowl this year for the sixth time, stands 10 feet above sea level. That will change, although projections vary widely.

Miami first hosted a Super Bowl 52 years ago. What will Miami be doing 52 years from now?

“We just don’t know how fast the water is going to rise,” said South Miami Mayor Philip Stoddard, who has long been sounding the alarm about climate change.

At some point, the time for games will end. Wanless, director of the University of Miami’s geological sciences department (elevation 13 feet), and other scientists have warned the sea in South Florida could rise by up to 30 feet by the end of the century.

That’s a first down’s worth of water, an amount so difficult to fathom that Wanless prefers to emphasize a more conservative projection of 8.4 to 13.7 feet by 2100.

And long before seawater begins lapping at the base of Dan Marino’s statue near the Dolphins’ stadium entrance, life in Miami could become less than super.

With a sea level rise of 2 feet — which Wanless considers possible before 2040 — failing sewage treatment plants and flooded septic systems could become a serious problem. Street flooding would disrupt transportation, and the area would be at increased risk of catastrophe from hurricanes.

Obstacles to future Super Bowls in Miami might surface first not at the stadium, but in Biscayne Bay.

“Creep of fecal matter into the bay is going to make the area inhospitable, because you can’t swim in the water. That is already happening now,” said Albert Gomez, co-founder of the Miami Climate Alliance, a grassroots group focused on policy. “Would you want to go to Miami when the bays are full of fecal matter? Are you going to want to have a Super Bowl if you don’t have that under control?”

Even if sewage and septic tanks don’t spoil fun in the South Florida sun, a rising sea will alter the landscape.

“Are people going to want to come to a beach if there is no beach?” Wanless said. “Which will happen. At least the beach won’t be where you want it.”

“The issue will be if the hotel districts and transportation are compromised,” Stoddard said. “That’s my big concern.”

Rising temperatures are a lesser worry, although Gomez said extreme heat might someday make South Florida unsuitable for football. He pointed to a projection of 200 days above 95 degrees annually 50 years from now.

For the NFL, climate change won’t be just a Miami problem. The Jacksonville Jaguars’ stadium sits on the banks of the St. Johns River at an elevation of 3 feet. The New Orleans Superdome is also at 3 feet. The Jets and Giants play home games 7 feet above sea level in New Jersey.

South Florida is built on porous limestone, which makes adaptation to a higher ocean especially difficult. And because the topography is so flat, challenges will be widespread. With a rise of 12 feet, high tide would cover 97 percent of Miami-Dade County, Wanless said.

The Miami Beach Convention Center (elevation 7 feet) is the site of this year’s Super Bowl Experience interactive theme park. The city, built on barrier islands between Biscayne Bay and the Atlantic Ocean, is already spending millions of dollars to raise streets, upgrade storm drainage and otherwise adapt to the changing climate.

“We’re at the tip of the spear,” Mayor Dan Gelber said. “We’re going to feel it before others.”

But Gelber, a Democrat, is optimistic Miami Beach can continue to host Super Bowl events half a century from now.

“In 50 years our roads may be a little higher and our pump system may be engineered differently, but we will be dry and happy,” he said. “All of this is very surmountable. We’re a man-made island to begin with. You can adapt to these new challenges, but you have to adapt. You don’t want to wait until you’re under water.”

Also sanguine is Ben Kirtman, professor of atmospheric sciences at the University of Miami. He said state and local governments increasingly acknowledge the need to reduce emissions and adapt to a rising sea.

Kirtman said the NFL could play a role with its big bullhorn.

“This is an existential threat to much of Miami,” he said. “If the NFL shined a little light on that, that would be extremely helpful in shifting attitudes.”

The Dolphins have virtually eliminated single-use plastics at their stadium.

“More and more, climate change is on the NFL’s radar,” said Susan Groh, who works for the league’s environmental program as a consultant. “Any new projects we’ve suggested, they’ve always been supportive.”

When asked how concerned the NFL was about climate change making Miami a less appealing Super Bowl site, league spokesman Brian McCarthy said: “We will work with the Dolphins as they focus on working on local issues.”

The Miami Super Bowl Host Committee, however, has yet to address the challenges a changing climate will present when the group tries to bring future games to South Florida.

“We’ve had no discussion of that,” committee chairman Rodney Barreto said. “It has not been on our radar at this point.”

But for the Super Bowl in Miami, the clock is running, and no one knows how much time is left.