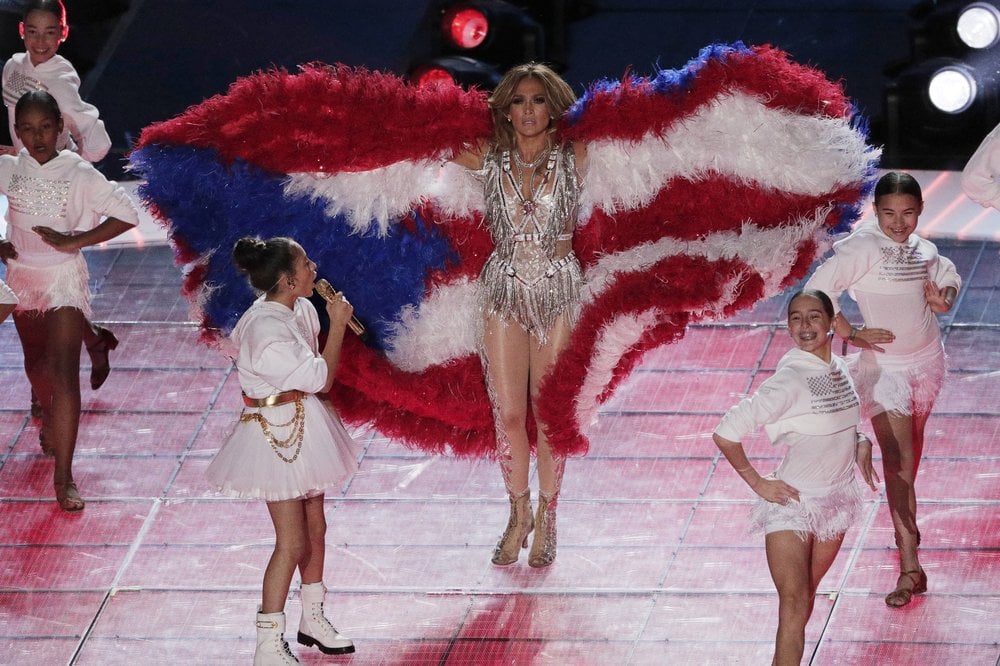 Across the U.S., Latinos took to social media to praise and dissect the show.

When the Super Bowl halftime show began, Yol-Itzma Aguirre and her relatives watched with anticipation. The El Paso, Texas, family was curious how Colombian-born Shakira and New York-raised Jennifer Lopez, two of the world’s most popular Latino artists, would seize the stage.

The performance Sunday was draped in Hollywood tropes of female sexuality. But it also contained subtle political messages about anxieties shared by many Latinos in the U.S. — children in cages, Puerto Rico in the aftermath of Hurricane Maria and the urge to be heard.

Aguirre, 39, had to watch the performance again. “My sister was tearing up. We saw more things,” Aguirre said. “We stopped caring about the game.”

Across the U.S., Latinos took to social media to praise and dissect the show.

Shakira paid homage to her Colombian roots by performing the mapalé —an Afro-Colombian style of dance from the country’s Caribbean coast. She also made a tongue expression called zaghrouta, a way to express joy in Arab culture. Her father is of Lebanese descent.

During her performance, Lopez brought out a dual Puerto Rican-American flag while her daughter sang the lyrics to Bruce Springsteen’s “Born in the U.S.A.” Her daughter and other children with American flags on their shirts had emerged from what appeared to be steel cages.

“Let’s get loud!” Lopez sang as her daughter sang the Springsteen hook. Shakira hit some drums.

In the background, strobe lights crossed each other to form an image of a cage.

Latinos saw the juxtaposition as a call for them to vote, being mindful that American authorities on the U.S.-Mexico border separated migrant children from their parents and locked them up.

“It was brilliant,” said Aguirre, a writer who has toured immigration facilities holding children.

Others pointed out that Lopez held up a Puerto Rican flag — once banned in 1948 — at a time of anger over how President Donald Trump has handled relief efforts after the island was hit by the hurricane and a recent earthquake.

The flag became a symbol of resilience and hope following the hurricane, which struck in September 2017 as a Category 4 storm. It caused more than $100 billion in damage and killed an estimated 2,975 people in its aftermath. The flag also became a symbol of resistance and justice last summer when massive protests over corruption and other issues led to the resignation of the island’s former Governor.

Luivette Resto, a Puerto Rico-born poet who now lives in Los Angeles, said she felt conflicted about the use of the flag because of the island’s history.

“Puerto Rico is still a colony of the U.S.,” Resto said. “We’re treated like property.”

But Resto said she was glad the appearance of the flag sparked needed conversations about Puerto Rico’s status.

Still, she was disappointed that more Afro-Latinos or Mexicans were not represented in the performance — a critique shared by many on social media. The legendary Mexican band Los Tigres del Norte from San Jose, California, opened the Spanish broadcast for Super Bowl LIV, but the performance was not seen on the English broadcast.

Others said they are satisfied by the overall Latina theme of the performance.

“It was a PERFECT example of how different cultures can exist under the ‘Latino’ umbrella,” comedian Cristela Alonzo tweeted. “We are different from each other and therefore should be allowed to tell DIFFERENT stories. See us as individuals.”

The halftime show wasn’t the only moment for Latinos on Super Bowl Sunday. The game began with multi-platinum Demi Lovato singing the national anthem. The Albuquerque, New Mexico-born Lovato is a descendant of Francisco Perea, a Hispanic hero for the Union in the Civil War who saw President Abraham Lincoln’s assassination.

The rendition by Lovato, who is recovering from drug addiction, sparked an emotional response from the people of New Mexico — a state with the nation’s highest percentage of Hispanic residents that has historically had some of the country’s highest drug overdose death rates.

For Shakira, this wasn’t her first time participating in an event with a political dimension. In 2011, for example, she told The Associated Press that proposed anti-immigrant legislation in some U.S. states went against her foundation’s efforts to provide education to poor people around the world.

The Grammy Award-winning singer said Latino immigrants in the U.S. who were facing anti-immigrant bills would have “justice” as public awareness about their plight grew.

“Justice will come. I’m sure,” Shakira told the AP after receiving an award at Harvard University. “Wherever there is … a kid, who could be the son or the daughter of a Latino immigrant, who cannot attend a school in the United States of America, that kid should be a concern to all of us and our responsibility.”

Lopez rarely speaks out on social issues, and her fiance, retired baseball player Alex Rodriguez, famously avoided addressing the mistreatment of Latinos as an active player.

But in recent months, Lopez has loaned her name to causes. In August, she signed an open letter in support of Latinos after deadly shootings in El Paso, Texas, and Gilroy, California.