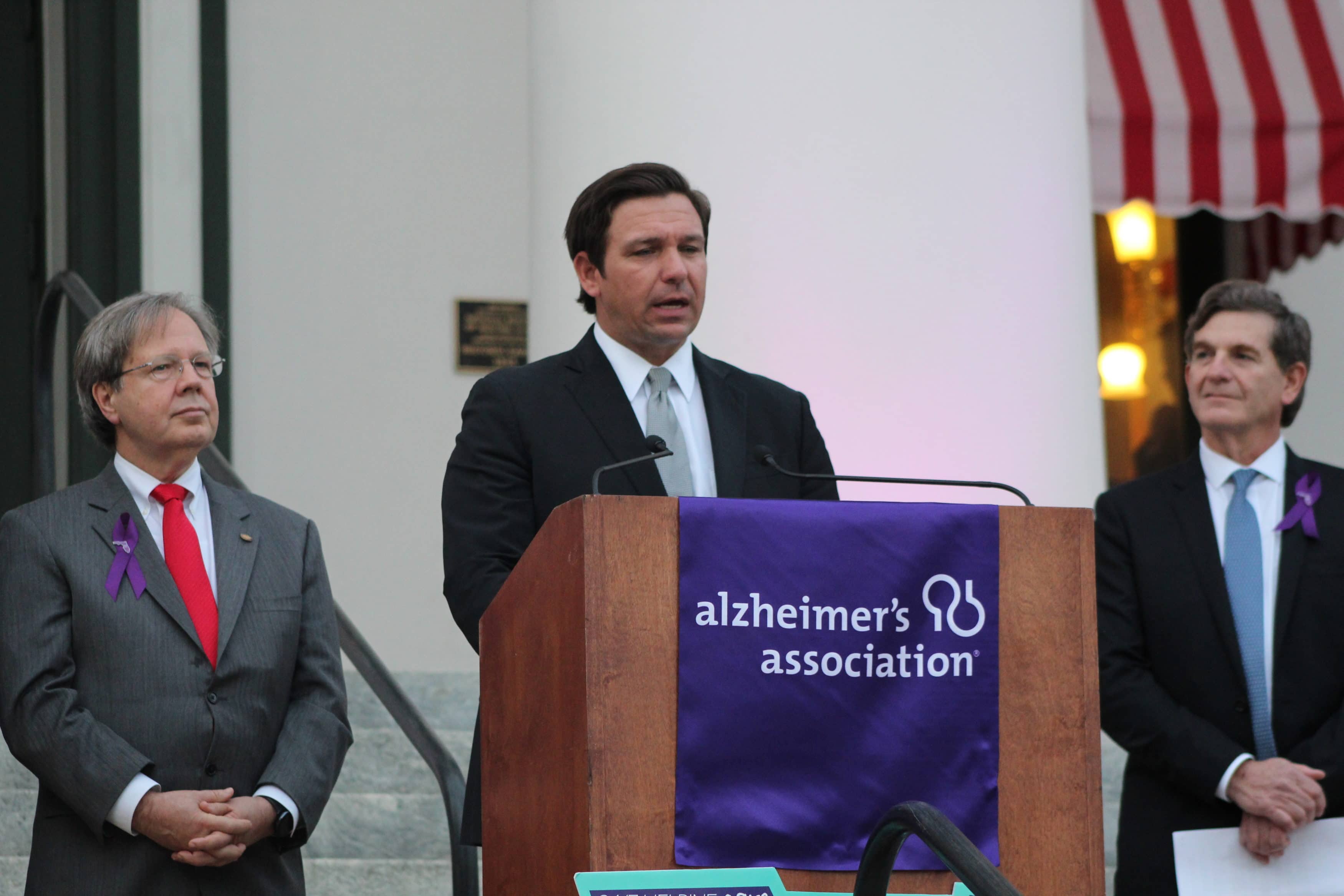 The Governor joined the Alzheimer's Association's "Rally in Tally."

More than 100 advocates from the Alzheimer’s Association crowded the walkway to the Historic Capitol. On Wednesday, the advocates will meet with their respective legislators to petition lawmakers to make Alzheimer’s issues a legislative priority.

“This is something that has a major impact across all sectors of the state of Florida. Someone who may have someone in their family, they’ll know someone who’s a friend that may have a family member. Every single community in Florida is effected by this,” DeSantis said.

The lawn was scattered with 560 purple flags representing the 560,000 Floridians currently living with Alzheimer’s, he added.

“We have the second highest prevalence of the disease in the nation, and obviously with our demographics, you understand why that could be,” DeSantis said. “But by 2025, the number’s projected to increase to over 700,000.”

“Without this support, the eminent scientific accomplishments that will be the pillars of discover could not take place,” he said. “This program has been very impactful.”

Last year, Florida ranked eighth in federal Alzheimer’s funding and number one in the Southeast.

Alzheimer’s and related dementias cost the U.S. $290 billion last year, according to the Alzheimer’s Association.

Reps. Scott Plakon and Matt Willhite and Sens. Audrey Gibson, Debbie Mayfield and Annette Taddeo, all spearheading their own Alzheimer’s-combating efforts, joined the rally in support.

And Elder Affairs Secretary Richard Prudom touted the state’s support for “care partners” and agency reforms. Support, care and understanding often fall short of the needs and aspirations of those living with dementia, he added.

“The Governor has recommended, as well as Rep. Plakon and Rep. Willhite, a dedicated dementia director for Florida, who will coordinate all poly-symptom programs that relate to dementia throughout the state,” he said. “That truly is taking things to another level.”

The association’s vice president of public policy, Michelle Branham, introduced Bobby Marshall, a Tampa-based teacher who was diagnosed with Early-Onset Alzheimer’s disease at 55. He shared his diagnosis with his students, believing it was fair to explain why he had occasional memory lapses.

“It was probably the best thing I’ve ever done,” he said. “These kids rallied around me, they sell cookies, they make t-shirts, have bake sales, car washes, and every year since I’ve been diagnosed, they raise about $3,000 to go towards the association.”