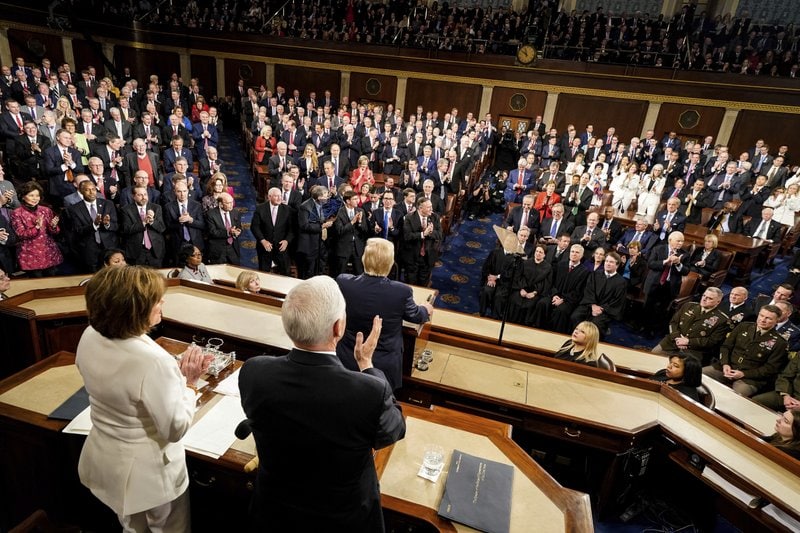 Trump spent much of the speech highlighting the economy’s strength.

Standing before a Congress and nation sharply divided by impeachment, President Donald Trump used his State of the Union address Tuesday to extol a “Great American Comeback” on his watch, three years after he took office decrying a land of “American carnage” under his predecessor.

Responses to the President’s address ranged from glowing to dismissive, particularly on the Democratic side, accusing the president of the very divisiveness he said must end.

The Speaker embarrassed herself by ripping up her paper copy of the speech in dramatic fashion. So pathetic. #SOTU2020

Last night at the #SOTU2020 two things were very clear:

1. ⁦@POTUS⁩ is firmly committed to helping #Venezuela restore its democracy & oust the illegitimate #MaduroRegime; and

2. The cause of freedom in #Venezuela has strong bipartisan support pic.twitter.com/PFzTUXekPT

“Socialism destroys nations. But always remember, freedom unifies the soul.” Well said! We stand with the people of Venezuela! 🇻🇪

“In America, we celebrate faith. We cherish religion. We lift our voices in prayer. And we raise our sights to the glory of God.” – @realdonaldtrump #SOTU #StateOfTheUnion pic.twitter.com/hyIxhLxHmI

President Trump’s speech tonight hit all the right points, laying out a pro-growth economic agenda and a call for bipartisan unity. I look forward to working with the administration and members of Congress from both parties to continue moving the country forward. #SOTU2020

Yet not a word from the president about gun violence.

“Tonight, President Trump painted a picture of hope and prosperity as he laid out his vision for the future of our great country. Over the last three years, our country has experienced unprecedented economic growth and strengthened our once depleted military. American workers are thriving because of the policies put into place by the president.

“Despite Democrats’ efforts to block President Trump at all turns, American optimism is at an all-time high. It’s clear that under his leadership the “Great American Comeback” is in full swing.

“Americans across the country in every income group are seeing the highest wages and salaries in decades and more than 7.3 million jobs were created in the last three years. I am committed to working with President Trump and his administration to keep this momentum going.”

My statement on President Trump’s State of the Union Address – pic.twitter.com/1udHqLJQRE

“The American people deserve more than a speech filled with untruths. The President said he will defend people with pre-existing conditions, but he is in federal court trying to overturn the Affordable Care Act. He made promises to lower drug costs, but he opposes House legislation that allows for drug price negotiation.

“Tonight, the Democratic Women’s Caucus wore white to send a strong message that we’re here to fight for the people and we’re not backing down. We’ve passed legislation to lower the cost of prescription drugs, protect people with pre-existing conditions, and strengthen economic security for families across the country.”

“Tonight’s State of the Union Address was a futile attempt at self-aggrandizement. Instead of laying out a plan to take action on issues on which the vast majority of Americans agree, the president used tonight to mislead the American public and pander to his political base. The president failed to address the gun violence epidemic that kills countless of Americans each year and failed to back meaningful gun safety measures like background checks, which over 90% of Americans support. The president failed to present a plan to combat the climate crisis that endangers coastal communities from Miami to Key West or to ensure Americans have clean drinking water. The president squandered an opportunity to support bipartisan legislation granting TPS to Venezuelans or to outline a comprehensive strategy that supports Venezuelans yearning for freedom and democracy,

“President Trump claimed to stand for protecting Medicare, Social Security, and Americans with pre-existing conditions, while at the same time supporting radical policies, extreme budget cuts, and partisan lawsuits that threaten those same programs and protections. Especially dangerous to diverse communities like the one I represent, was the president’s shameful distortion and criminalization of immigrants. The president touted his moral righteousness, while children and families seeking refuge sit in cages, and Dreamers and TPS holders wait in limbo as a result of his immoral immigration policies. He once again showed that he is willing to deceive the American people, if it benefits him politically. It is past time for President Trump to put people over politics and join Democrats in finding solutions to the issues that weigh heavy on the families of South Florida.”

Americans are tired of gridlock. @POTUS failed to rise above partisan rhetoric that has blocked bipartisan cooperation to end gun violence, fight climate change, & lower Rx drug costs. The president must work with both parties to deliver results for the American people. #flapol

“Tonight’s message from President Trump was loud and clear: America is Back! Our economy is booming, we have rebuilt our military and pro-family, pro-life, and pro-business policies are working. I applaud the President for his strong leadership and I’m optimistic that our best days are yet to come.”

“The State of our Union is strong.  Thanks to three years of this administration’s leadership to get the government off the backs of hardworking Americans and put America first; our economy, our military, our families, our environment, and our communities are stronger. From appointing judges who know and respect the U.S. Constitution; to improving the VA and veteran services; to reducing tax burdens on small business owners and taxpayers; to streamlining and removing unnecessary red-tape that blocked infrastructure investments; improving our trade agreements for American workers, manufacturers and builders; securing our borders; and rebuilding our military – President Trump has kept his promises.

“The results are clear as more than 2.5 million Americans have risen out of poverty! Labor participation and wages are rising, especially for the bottom 10 percent of earners. In Florida 630,000 more jobs have been created, homeownership is up 3 percentage points and real, per-capita income is up 7 percent since the President’s election. There is more work to be done.  I welcomed hearing the President reiterate his commitment to tackling tough issues, fix broken systems, and stand up for our most vulnerable.  I hope my colleagues – Democrat and Republican alike – will put aside politics and work together to invest in our country’s infrastructure, improve border security and reduce and prioritize spending.”

“As President Trump addressed Americans at the State of the Union tonight, his unparalleled record of success in his first three years is clear: two dangerous terrorist leaders killed, two Supreme Court Justices confirmed, and two major trade deals signed into law. America is thriving under President Trump’s leadership as we are experiencing the strongest economy we have ever seen, and the best is yet to come.”