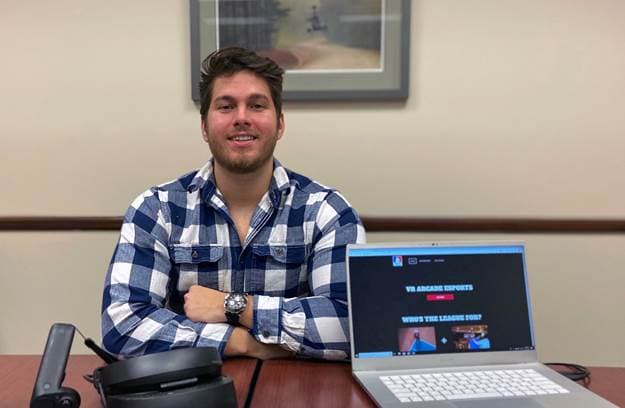 Andre Ripley earned a six figure grant and a chance to get a $1M contract.

A Florida Polytechnic University alumnus is chasing down a $1 million deal with Facebook to run virtual reality gaming tournaments for the social media giant.

Andre Ripley graduated from the Lakeland university last year and is already staring down the barrel of a lucrative career with the company he founded, Virtualities.

“We negotiated with Facebook for probably four months and we finally closed the deal on New Year’s Day,” said Ripley, chief technology officer of the Salt Lake City, Utah, company. “That was a great start to the year.”

Ripley is hoping to land a $1 million deal with Facebook this spring.

“We have to launch our platform and meet all the requirements for Facebook and as long as we keep our platform running, we have a good chance of closing the million-dollar deal,” Ripley said. “We’re almost done and ahead of schedule right now.”

Ripley said the traditional way of running gaming tournaments involves many people working on spreadsheets to track scores and other data.

“That’s really outdated and hasn’t been automated. Since the demand for esports is getting higher, we’re trying to solve that with the Facebook deal,” Ripley said.

Ripley, a U.S. Virgin Islands native, ran a Beat Saber tournament last year through his company with competitors from 78 countries.

“With the power of Facebook, I can’t imagine how many people will compete in the Pistol Whip tournament, but we’re prepared for anything,” Ripley said. “I never expected to be funded by Facebook — my first round of funding was from my dad, who gave me $300 to develop a prototype for a box that does appraisals for diamonds.”

During his time at Florida Poly, Ripley entered several entrepreneurship competitions throughout Central Florida including a third-place finish at the 2018 Governor’s Cup competition featuring his Insta-List product that captures, scans and lists items for sale on digital platforms in less than 10 seconds.

“The single best thing I’ve done was getting involved with the entrepreneurship program at Florida Poly because you don’t even need to have the best idea or be completely thought through, you just have to try and get feedback,” Ripley said.

“Even when I’ve failed it’s like I’ve won because I got crucial feedback and I implemented it into the Facebook deal.”

nextFlorida lawmakers react to the State of the Union address