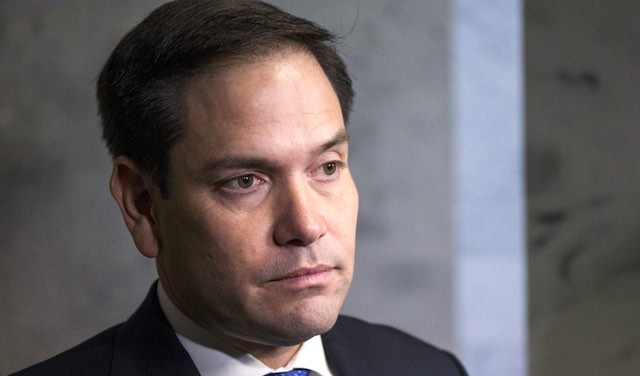 The U.S. was not well-postured to counter Russian election interference.

The U.S. government was woefully unprepared not only to respond but to even understand what was happening in 2016 when Russia attacked America’s elections.

That was a key theme that Sen. Marco Rubio and four other Republican members of the Senate Select Committee on Intelligence noted in a joint statement they issued Thursday, highlighting findings of that committee’s latest investigative report.

“Well before the 2016 election, there was clear and mounting evidence that Russia intended to conduct cyber-attacks against our political infrastructure,” Rubio and his colleagues wrote. “This report and our additional views demonstrate the Obama administration was paralyzed in recognizing, and incompetent in responding forcefully to Russian attempts to sow discord in the U.S. and influence our elections. Their delayed and ineffective response — combined with other missed opportunities — enabled further Russian aggression. Our report highlights the risks not only of failing to heed intelligence warnings, but also of accommodating authoritarians like Vladimir Putin.”

The new 54-page report titled “U.S. Government Response to Russian Activities” is the third volume in a five-volume set intended by the committee as it investigates the 2016 elections interference and whether America is any better prepared heading into the 2020 elections.

This volume looks at what happened in 2016, what the administration of President Barack Obama apparently understood about what was happening in real time, and how it responded. The report also notes that the interference appeared to be helping then-candidate Donald Trump’s campaign.

In their joint statement, Rubio and his Republican Intelligence Committee colleagues, Sens. Tom Cotton of Arkansas, John Cornyn of Texas, Ben Sasse of Nebraska, and Jim Risch of Idaho focuses significantly on the report’s findings regarding the Obama administration’s apparent failures.

Without specifically expressing judgment on whether Trump’s administration has learned from those failures or is any more prepared, the quartet also noted the report’s recommendations that the current administration must do a number of things, notably preparing for future attacks on U.S. elections.

The heavily redacted third volume begins by describing how U.S. officials believed “they were in uncharted territory in the second half of 2016 as they became aware of aspects of Russian interference in the U.S. Elections.”

“In the fall, the Obama administration responded with several warnings to Moscow, but tempered its response over concerns about appearing to act politically on behalf of one candidate, undermining public confidence in the election, and provoking additional Russian actions. Further, administration officials’ options were limited by incomplete information about the threat and having a narrow slate of response options from which to draw,” the report’s introduction states.

“With the benefit of hindsight and additional information, the committee now knows far more about the scope of Russian activity than the administration knew at the time,” the report states. “While it was clear to administration officials the committee interviewed that Russia was taking steps to interfere in the election, the extent of Russian activity to influence voters, sow discord in U.S. society, and undermine confidence in democratic institutions only emerged later.”

Among the committee’s findings highlighted by Rubio and his colleagues:

— The  U.S. government was not well-postured to counter Russian election interference activity with a full range of readily available policy options.

— The Obama administration was constrained in its response by a number of external and internal concerns. Those factors included the highly politicized environment and a delay in definitive attribution to Russia of what was happening.

— The committee recommends the U.S. exert its leadership in creating international cyber norms.

— The committee recommends the executive branch prepare for future attacks on U.S. elections.

— The committee recommends increased information sharing on foreign influence efforts, both within government and publicly.