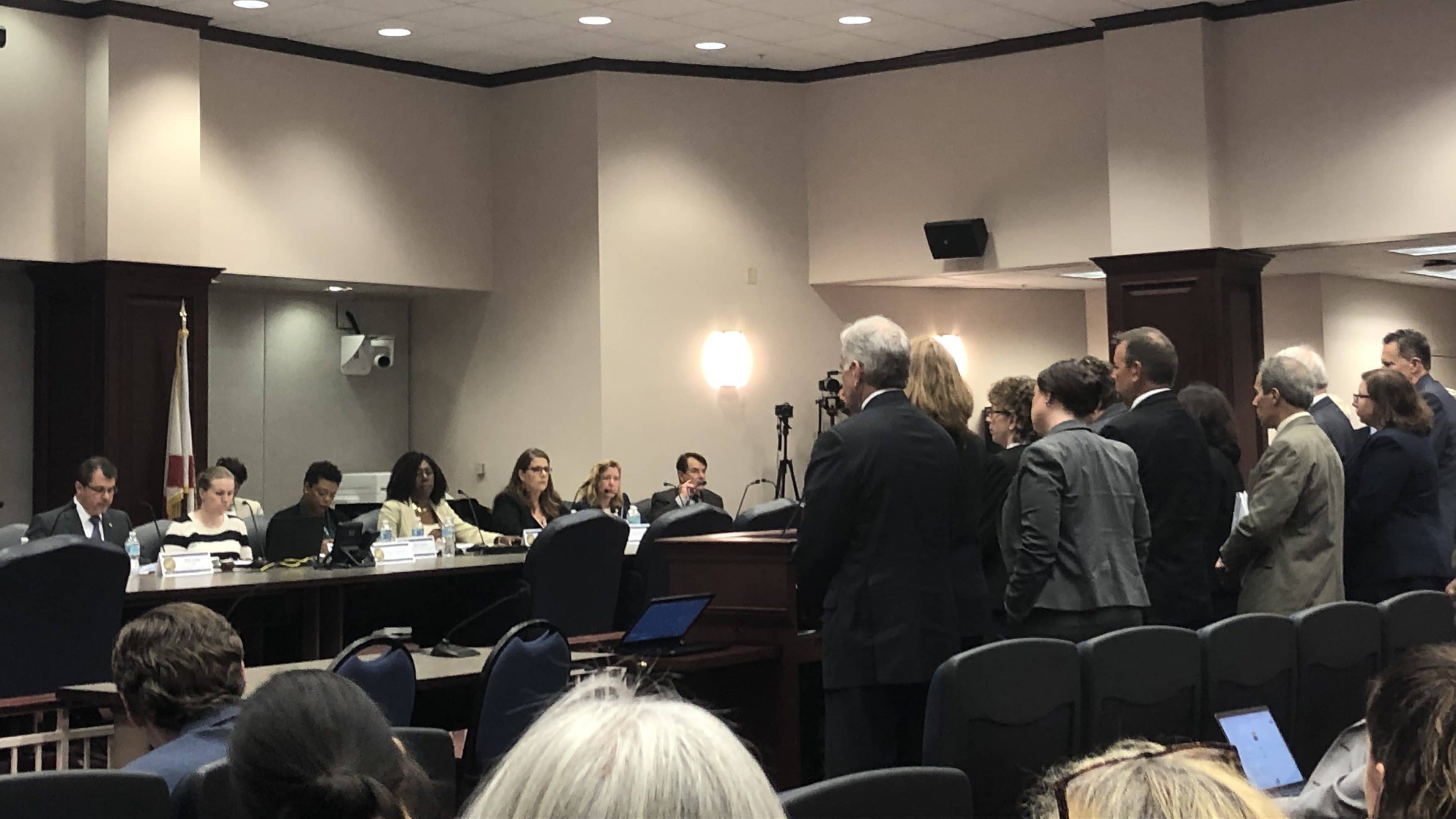 Three of the board’s recent chairs claimed they first learned of their CEO’s bloated contract in the press and after reviewing the documents again. House Public Integrity and Ethics Committee Chair Tom Leek, who said he was shocked following the afternoon of testimony, called their answers to how it happened “insufficient.”

The Florida Coalition Against Domestic Violence (FCADV) has been under fire for months starting with concerns former CEO Tiffany Carr received $761,000 in annual salary first reported by the Miami Herald. But recent revelations showed she received more than $7 million in compensation over three years.

“You either have to believe it was an absolute fraud or stunning lack of diligence,” Leek, an Ormond Beach Republican, told reporters.

Carr received hundreds of days of paid time off annually since 2014, including one year with 465 off. During the six-hour meeting, former FCADV board chairs justified the compensation, which amounted to 8.4 years of paid time off, as flexibility for her to take medical leave to treat a brain tumor.

Carr’s contracts put no restrictions on how the time off’ could be used despite executive board members insisting they thought it would only be used for medical leave. And unused days could be stored and rolled over into subsequent years until used for leave or cashed out as a deposit.

“I could have never imagined that she would convert the time we gave her for her illness into cash,” Melody Keeth, three-time board chair, told the panel. “The Tiffany Carr that I knew would not take all this PTO.”

And Keeth, who was pushed out as director of the Serene Harbor shelter this month ahead of her planned retirement, added that hours becoming days exceeding a year was a “typo.” Laurel Lynch, who served as board chair for one year, alleged memos with her electronic signature were revised without her recollection after she initially signed them.

Keeth, Lynch and Angela Diaz-Vidaillet, the third past board chair, testified they were surprised to learn that Carr’s contract said days instead of hours. Diaz-Vidaillet added that the board discussed the revelation among themselves.

During a break following the meeting’s first two hours of testimony, devoted to Keeth, Rep. Randy Fine told Florida Politics he was in “disbelief” that she repeatedly mistook days for hours across all documents in her three years as board chair. And as the hearing continued and Lynch and Diaz-Vidaillet sang the same tune, committee members began questioning whether the three coordinated their testimony despite Diaz-Vidaillet saying otherwise.

“As a lawyer, every time I hear witnesses come forward and the testimony is so similar, and it was not just the ‘hours’ testimony where there was another aspect of it that was almost identical, that makes you think that they’ve coordinated in advance,” Leek said.

Carol Wick, a whistleblower ousted from the Harbor House shelter in Orlando after she says she began to ask too many questions, told Florida Politics the coalition took a permitted administrative cut of state dollars but also demanded dues from the 42 shelters the group oversaw. She alleges that double-dipping let the agency convert funds it sent to the shelters as restricted dollars into unrestricted dollars.

Additionally, Wick says the $4.2 million compensation check Carr received last year could have paid for 49 advocate positions that had been eliminated. According to the Department of Law Enforcement, 2018 saw 215 deaths in domestic violence cases, some of which she says could have been avoided if the state’s local centers were fully funded instead of being forced to turn victims away.

“My biggest take-away from the day as I sat there and listened to these hours and hours of testimony, I kept on thinking about all of the domestic violence survivors that were not being served because of the decisions that were made by Ms. Carr and the board of directors and the executive committee.”

Carr’s contract allowed her to work remotely in North Carolina, where she owns multiple homes, to avoid the heat restrictions her treatment necessitated. She also received travel compensation and life and health insurance policies.

This month, Gov. Ron DeSantis implored the Legislature and Chief Inspector General Melinda Miguel to investigate FCADV’s alleged misuse of state funds. The group finally handed over documents it had withheld for over a year but with redactions, leading the House to follow through on Leek‘s threats to issue subpoenas.

On Thursday, the Governor called for contract reviews across the executive branch. That executive order outlines several reviews for all agencies to undertake and report within the next 45 days. Going forward, each agency must give annual report on executive team compensation at partnered nonprofits.

The Senate is expected to approve a bill (HB 1087) by Miami-Dade Republican Rep. Juan Fernandez-Barquin Wednesday after fast-tracking the Senate companion through the committee process. And the committee will reconvene Thursday to continue hearing testimony from FCADV CFO Patricia Duarte and chief operating officer Sandra Barnett.