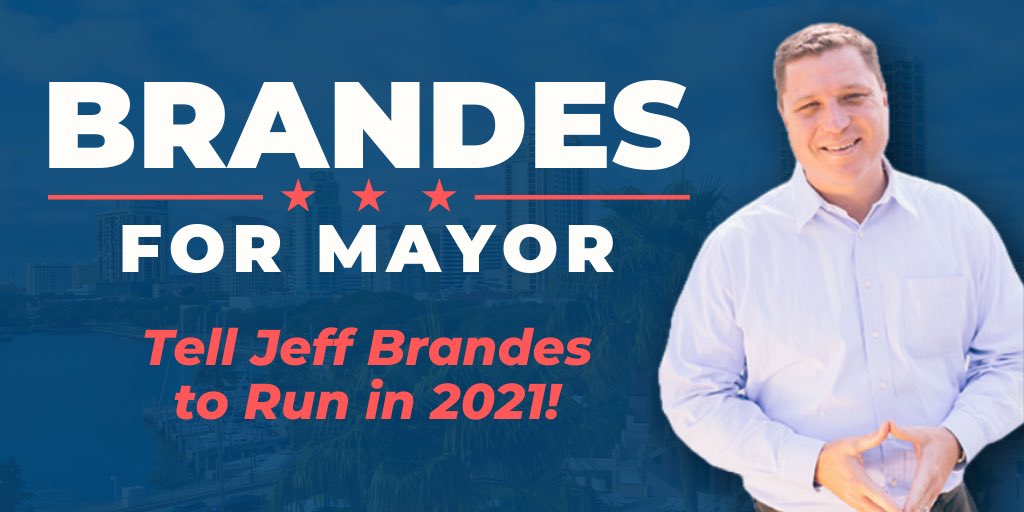 Sen. Jeff Brandes continues to say he will not run for St. Petersburg Mayor, but that hasn’t stopped at least one person from trying to persuade him otherwise.

Someone launched a Twitter account in November under the handle @BrandesForMayor with the description “tell Jeff Brandes to run in 2021!”

The unknown Twitter account author included a parenthetical that the page is not associated with Brandes or any political committee.

Brandes has repeatedly said he has no intentions to run.

The account was inactive since its inception, but on Thursday showed some signs of life with two posts. Both are images of Brandes in front of the downtown St. Pete skyline shaded in blue with a “Brandes For Mayor” logo and another request to “tell Jeff Brandes to run in 2021!”

While Brandes, a Republican, isn’t in, it’s not surprising that some still want him to reconsider. So far only two candidates have announced intent to run and both are Democrats — St. Pete City Council member Darden Rice and Pinellas County Commissioner Ken Welch.

St. Pete has become increasingly liberal over the years. Voter registration in the city as of the end of January favored Democrats 85,494 voters to 49,053. However, another 48,092 were registered without party affiliation.

That’s important because, while the city might now be solidly blue, unaffiliated voters might not be as inclined to vote along party lines in a citywide election as card-carrying partisans.

Brandes has established himself as a more Libertarian-leaning Republican and often sides with Democrats on some more social issues. He has been a leading voice for bringing medical cannabis to the state and now pushes for expanding that to adult-use cannabis.

This Legislative Session, Brandes has been a champion for criminal justice reform including reducing sentences for some inmates, reducing mandatory minimum requirements that often disproportionately affect minority communities and increasing protections for pregnant inmates.

Those issues are important to many Democrats and could give him some favor among those who might not otherwise support his policies. And as the only Republican in the race, Brandes could also benefit from deep-pocketed donors both locally and statewide.

He also brings to the table broad name recognition as a lawmaker representing St. Pete for nearly a decade.

Still, a bid could present a challenge for Republicans at the state level. His Senate District 24 seat is not up for election until 2022, which would mean Brandes would have to vacate the seat early to run for Mayor.

Brandes is not the first candidate to have supporters use social media to try to encourage them to run. U.S. Sen. Elizabeth Warren famously had supporters using the hashtag #RunWarrenRun ahead of the 2016 presidential election. Locally, a Twitter page is trying to get former St. Pete Mayor Rick Baker to run for Congress against Rep. Charlie Crist, to no avail.