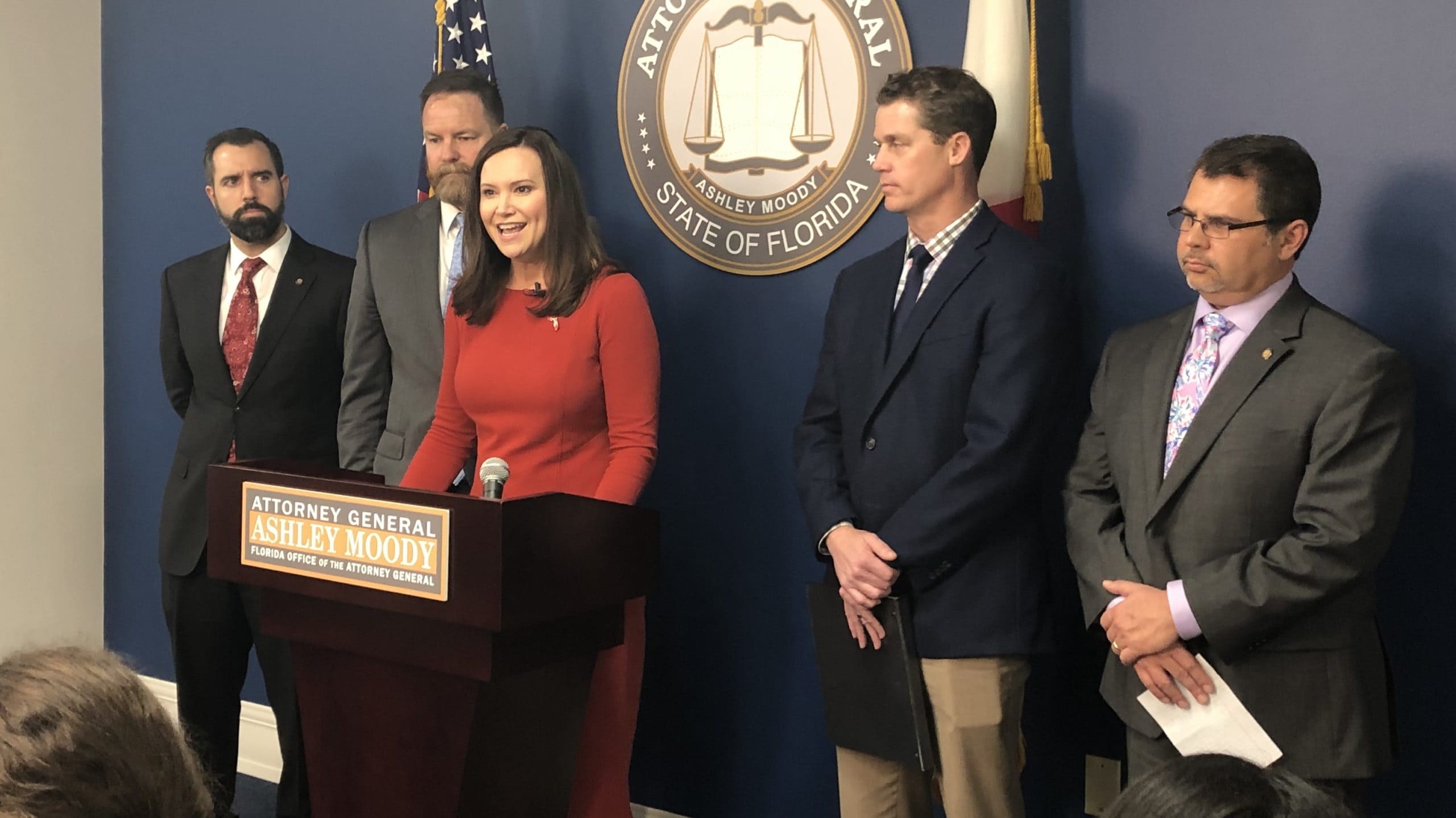 The Attorney General's legal action coincides with a suit filed by DCF against FCADV and its officials.

The complaint against the Florida Coalition Against Domestic Violence (FCADV) seeks to preserve the coalition’s assets and evidence, dissolve or reorganize the nonprofit and to recover the $7.5 million former FCADV CEO Tiffany Carr allegedly took from the state. Moody called Carr “one of the greediest people I have ever known in charge of a nonprofit.”

“The damage caused by the actions of Ms. Carr and the leadership of the coalition will certainly take time to repair,” she said. “But today’s action is aimed at recovering as much of the money that was wasted on executive compensation as we can to ensure that victims of domestic violence are safe and secure.”

Dollars recouped from the legal action would go to an entity to be named later under DCF. And the Attorney General did not rule out criminal charges against Carr or other FCADV officials.

Moody argued that the coalition broke its agreement to hand its unspent budget back to the state. Instead, she alleges FCADV diverted those dollars to executives’ contracts as hundreds of days of paid time off annually — in one instance, more days than days in a year — and other compensation.

More than $51.4 million of FCADV’s $52 million budget came from state and federal government sources in the 2017-2018 fiscal year. Approximately 80% of that funding came from DCF. The state funds were meant to manage Florida’s 42 domestic violence centers, which provide victims with an array of services, such as counseling and education.

Additionally, the state hopes to be repaid for the $1 million in IRS tax liability when she liquidated millions of dollars of paid time off.

DCF Secretary Chad Poppell joined Moody for the press conference. During testimony last week, FCADV executives admitted the millions of dollars given to Carr was excessive and could have instead paid for additional domestic violence services.

“Today really is about the survivors of domestic violence in Florida,” Poppell said.

“No one won, not even Tiffany Carr. The victims of domestic violence lost, the state lost, DCF lost and it was her greed that put us into her posture, and I expect with this lawsuit, she will soon lose,” Fernandez-Barquin said.

Bean said the group was briefed on Moody’s plan to resecure the state’s dollars. He’s pursuing legislation next year to prevent a similar alleged abuse of state funds.

House Public Integrity and Ethics Committee Chair Tom Leek called Carr’s and others’ oversight of the coalition an insult to the word leadership. The committee has not yet presented the former CEO with her subpoena because she is currently staying in one of her two North Carolina residences.

FCADV has been under fire for months starting with concerns Carr received $761,000 in annual salary first reported by the Miami Herald. But recent revelations showed she received more than $7.5 million in compensation over three years.

In 2018, then-Gov. Rick Scott‘s administration began questioning the nonprofit about its finances in 2018.

The complaint and motion by the Attorney General’s office both call on courts to preserve the coalition’s documents and assets. Those documents allege FCADV officials flouted investigations into its executive pay, including into 2020.

Carr is listed as the sole member of the FCADV Foundation, a separately incorporated foundation intended to raise money for the coalition.

In the two fiscal years from 2016 to 2018, the foundation had a combined net revenue of nearly $300,000 and millions in net assets. However, the foundation made no distributions to FCADV or any other charitable foundations.

“Above all else, those assets must be protected, and there is simply no rational basis, in light of Ms. Carr’s track record, for the Court to repose any confidence in her judgment or integrity when it comes to running the Foundation.”

The motion seeks to appoint a new recipient of DCF’s funds following the power vacuum left by Carr’s resignation and the subsequent resignation of interim CEO and former Sen. Denise Grimsley.

The Department of Children and Families and DeSantis filed a separate suit against the coalition and its members Wednesday.

It alleges FCADV broke its contract, its fiduciary duty and its implied duty of good faith. As for Carr, the lawsuit levels fraudulent concealment and misrepresentation, negligent misrepresentation and civil conspiracy accusations.