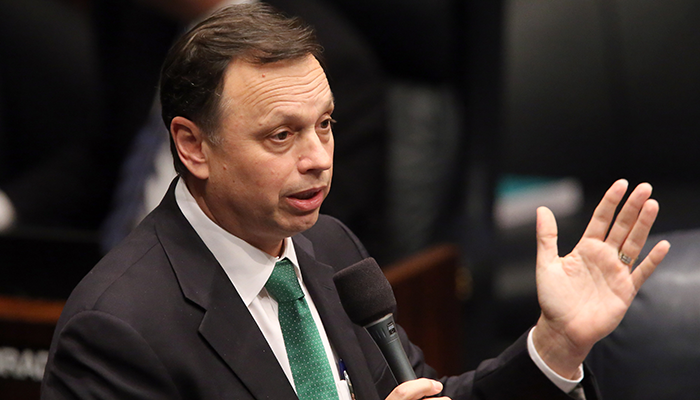 But the bill remains divisive as the House prepares to vote.

The Senate passed legislation requiring Florida businesses to confirm whether employees are eligible to legally work in the United States.

The mandatory E-Verify legislation (SB 664) was passed 22-18 in the Senate, with North Florida Republican George Gainer joining with Democrats voting no.

“Federal law says it is illegal to hire somebody in the country to work if that person is not authorized to work in the United States of America,” Lee said.

Employers right now can confirm eligibility using I-9 forms from the federal government, or they can access the E-Verify database maintained by the Department of Homeland Security.

Lee’s bill will require companies to do so, and allows the Department of Economic Opportunity to suspend or strip away business licenses from companies knowingly violating the law.

While the bill ultimately garnered support from most Republicans, an E-Verify requirement has been controversial for years. GOP leadership in both chambers of the Legislature voiced serious doubts about the subject along the way.

But Lee expressed some hopefulness the language passed by the Senate represents a final form for the bill.

The bill has been critiqued on the right and the left.

Sen. Jose Javier Rodriguez, a Miami Democrat, said Lee’s bill goes beyond verifying employment. He sees the bill both expanding the degree to which government tracks individuals living here, and effectively turning the Department of Economic Opportunity into an immigration enforcement arm.

He expressed the greatest fear over provisions allowing individuals to report a business to the DEO if they suspect it is hiring undocumented workers. If DEO determines that indeed is happening, the agency must report the matter to Immigration and Customs Enforcement.

“You are effectively calling ICE, but the Department of Economic Opportunity does it for you and you have a state agency calling,” Rodriguez said.

And while Lee has stressed the legislation applies only to new hires, Rodriguez said there will be no way for the DEO to confirm if an undocumented worker was in place before or after the bill became law.

That concern seemed to be why Gainer broke party lines. He voiced concern last week about how the bill would affect farms who may have undocumented workers who nonetheless have been on payroll for decades.

Concerns were also raised about the accuracy of the E-Verify database as a whole. Lee said the system was 98.5% accurate, “about as accurate as anything I’ve seen come out of this Legislature in 20 years.”

Sen. Joe Gruters, a Sarasota Republican who co-introduced the bill, also stressed the low rate of bad information kicked back by the database, and said that can be remedied in individual situations.

More important, Gruters said the bill would take away the top incentive for new immigrants to illegally travel to Florida, the promise of work. The potential law “turns off the spigot of illegal immigration,” he said.

The American Business Immigration Coalition, however, immediately pushed back at Gruters’ characterization. The group said Green Card holders were subject to high error rates, four times the rate of those for U.S. citizens.

Meanwhile, states like Mississippi that have E-Verify requirements in place still suffer problems with illegal immigration. Indeed, recent federal raids led to 680 undocumented workers in that state being detained.

In truth, both businesses and workers will find ways to get around E-Verify requirements, ABIC predicts, but it will still contribute to a hostile environment for workers while allowing vindictive reports to be made to the DEO.

The House still has to vote on legislation on the House floor. Companion legislation (HB 1265) from Rep. Cord Byrd was postponed on second reading Friday.

That appeared to be done to allow an amendment to Lee’s bill in the Senate to adopt some provisions from the House. High-level negotiations on E-Verify have been taking place between the House, Senate and Gov. Ron DeSantis’ office. Officials speaking for DeSantis declined to comment on the bill passed in the Senate.

Speaker José Oliva has voiced certain concerns about E-Verify legislation before. At a time when Lee’s bill included a carveout for agriculture, Oliva said he wanted a clean bill. But he also suggested the state move carefully into making private businesses act as enforcers of the law.

“If in fact Florida businesses are made to be a certain policing arm,” Oliva said, “for the government, then yes it should be done equally.”

Lee addressed such concerns on the floor as well, noting private businesses already need internal checks for a variety of other laws, from calculating taxes to maintaining a nonhostile work environment.

But critics can be counted on to say a hostile environment will be exactly what E-Verify rules create.