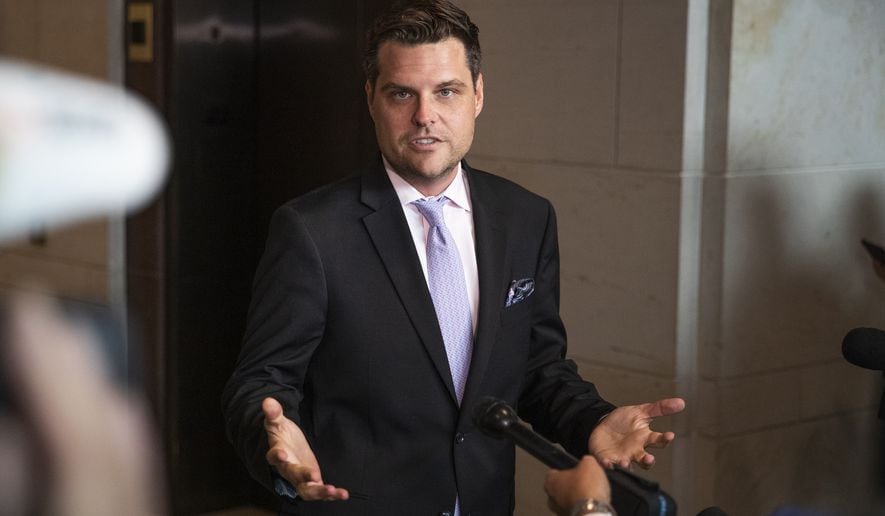 Before isolating, Gaetz flew on Air Force One with Donald Trump.

U.S. Rep. Matt Gaetz says he will voluntarily self-quarantine after coming into contact with a Conservative Political Action Conference (CPAC) attendee who later tested positive for the new coronavirus.

Earlier Monday, Gaetz flew on Air Force One with President Donald Trump. According to the New York Times, Gaetz discovered during the flight that he had made contact with that CPAC attendee.

Gaetz then “essentially quarantined himself, sitting in a section of the plane alone.”

The congressman also reportedly attended a party with Trump this past weekend at Mar-a-Lago.

Gaetz earned criticism for a stunt last week in which he wore a gas mask on the House floor while voting for funding to help combat the COVID-19 coronavirus. Some argued Gaetz was making light of the situation, though he has denied doing so.

Gaetz’s office made the announcement he was deciding to self-quarantine Monday afternoon.

“Congressman Gaetz was informed today that he came into contact with a CPAC attendee 11 days ago who tested positive for COVID-19,” read a message posted on the Congressman’s Twitter account.

“Congressman Gaetz had expected COVID-19 to impact Congress, given the elevated frequency of travel and human contact, and demonstrated his concern last week on the House Floor,” read a second portion of those remarks, attempting to further push back against criticism he was mocking concern over the virus.

The statement continued, “While the Congressman is not experiencing symptoms, he received testing today and expects results soon. Under doctor’s usual precautionary recommendations, he’ll remain self-quarantined until the 14-day period expires this week. Our Washington office will be closed during this time, with our Pensacola office remaining open.”

Another Republican Congressman, U.S. Rep. Doug Collins of Georgia, also recently interacted with Trump before voluntary self-quarantining. Collins traveled with Trump during a visit to the U.S. Centers for Disease Control and Prevention in Atlanta.

In total, four members of Congress are currently under self-quarantine. That number includes U.S. Reps. Ted Cruz of Texas and Paul Gosar of Arizona. None have reported experiencing any symptoms, however.

After wearing the gas mask on the House floor last week, Gaetz elaborated on his motivations with a TMZ reporter.

“Members of Congress are human petri dishes. We fly through the dirtiest airports. We touch everyone we meet. So if anyone’s gonna get coronavirus it’s totally gonna be Congress,” Gaetz said.

When questioned about where he got the gas mask, Gaetz joked that he had to “keep that confidential.”

Asked whether it was top secret, Gaetz said, “You don’t want to know what underground lair I pulled this from,” before adding, “It’s not made in China.”

The new coronavirus, which causes the COVID-19 disease, originated in China. After Gaetz’s comments last week, a constituent in his district died from the virus. That person was one of two Floridians who have died after contracting the new coronavirus.

Overall, 14 people have now been diagnosed with the coronavirus in Florida, though one of those cases is a nonresident. Another five Floridians have been returned to the U.S. after testing positive and are being held at a federal site.

nextSchools wrestle with fairness of closures during coronavirus outbreak