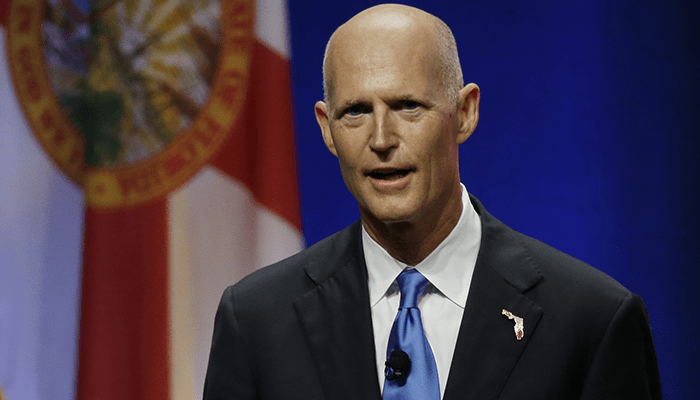 Sen. Rick Scott has entered self-quarantine after meeting with a Brazilian delegation that included an individual who later tested positive for the novel coronavirus.

“My office was alerted today by the Brazilian Embassy that a member of President Bolsonaro’s delegation tested positive for Coronavirus,” Scott said. “On Monday, I met with the President in Miami, and while I do not believe I interacted with the infected person, that individual was in the same room as me.”

The Florida Republican had a press conference scheduled Thursday but cleared his schedule.

Scott planned to announce at the event that he filed legislation to expand access to testing for the coronavirus that causes the respiratory disease COVID-19.

Brazilian media outlets reported Bolsonaro is being monitored and tested for the coronavirus as well, based on his press aide’s diagnosis.

Trump had dinner with Bolsonaro and the entire Brazilian delegation at his Mar-A-Lago estate while the group was in town.

Trump told reporters at the White House he’s not concerned. He and Bolsonaro “sat next to each other for a period of time, had great conversation,” Trump said. “We’ll find out what happens. I guess they’re being tested right now. But Trump said he is “not concerned.”

Scott’s office, though, said the Senator would take precautions.

Brazil did not indicate any suspicion ahead of the dinner that a member of the delegation was ill.

“The Embassy said the person had no symptoms leading up to or the day of the conference,” Scott said.

“After consulting with the Senate’s attending physician and my personal doctor, I have been told that my risk is low, and I don’t need to take a test or quarantine. However, the health and safety of the American people is my focus and I have made the decision to self-quarantine in an abundance of caution.

“I am feeling healthy and not experiencing any symptoms at this time. I will still be working on my plan to combat Coronavirus and protect American families, and my offices in D.C. and throughout the state will still be fully operational to help Floridians.”