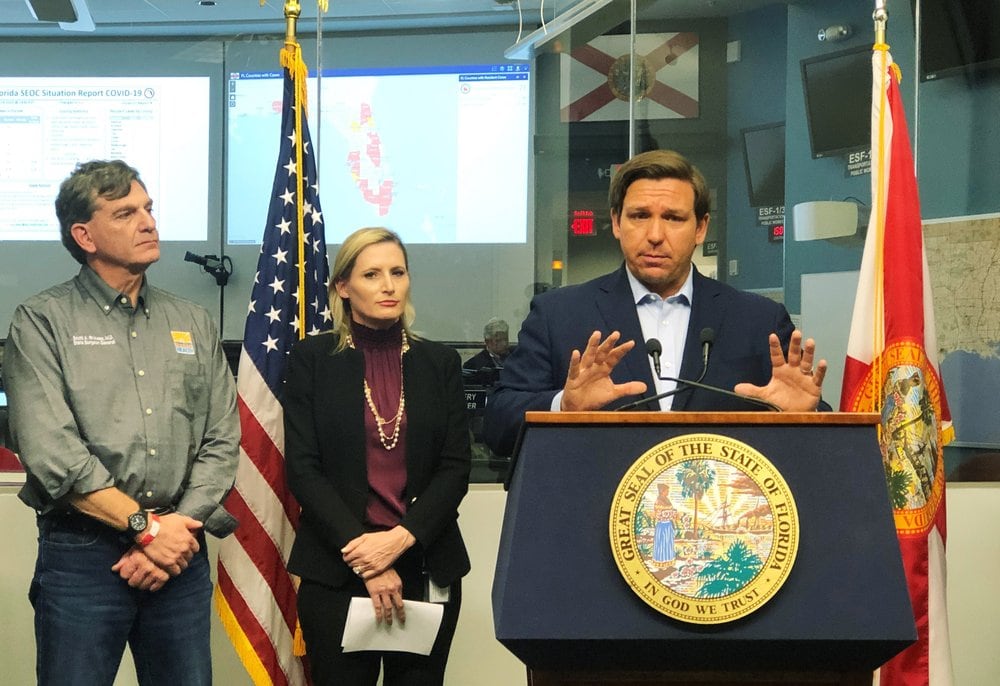 The Department of Health early Sunday announced 39 new positive tests for coronavirus. That is a 51% increase in the number of positives in the state and it comes just hours after health officials announced a third death.

The new release pushes Florida cases to 115, with 106 Florida residents tested positive for COVID-19 along with nine non-Floridians tested here.

Four Florida residents have now died after contracting the cirus.

Those include two deaths in Lee County, one in Santa Rosa County and an Orlando woman who tested positive in California after traveling to South Korea.

The first and most recent deaths in the state occurred in Lee County. Both were over 70 years old, but the most recent case was not travel-related. A 77-year-old man, who had tested positive on March 12, appears instead to be a “community spread” case who caught the virus in the U.S.

Gov. Ron DeSantis on Saturday sent a letter to Health and Human Services requesting the release of 61 Florida residents from Georgia, many of whom are elderly, who were previously aboard the Grand Princess voyage outside of California.

Meanwhile, the greatest concentration of known coronavirus cases in Florida remains in Broward County, now with 36 presumptive positives. There, an advisory is in effect regarding Port Everglades. The Centers for Disease Control earlier this week announced officials would contact anyone who had interaction with a handful of individuals tested positive and connected to the port. The agency is also working with Metro Cruises Services, recommending employees there self-isolate if they had any contact with multiple known cases..

The Broward cases now include six 19-year-olds and eight individuals in their 20s, demographics not typically at risk. Officials say 15 of the Broward cases are travel-related and another 16 are under investigation.

The newest batch of cases includes a 17-year-old Cuban boy who tested positive in Hillsborough County.

Positive tests thus far include the 36 in Broward County, 13 in Miami-Dade, five each in Collier, Lee, Palm Beach and Volusia, four each in Duval, Hillsborough and Manatee, three in Clay, two each in Orange, Pasco and Pinellas, and one each in Alachua, Charlotte, Citrus, Nassau, Okaloosa, Osceola, Santa Rosa, Sarasota, Seminole and St. Johns.

There have been about 500 negative test results statewide and more than 350 people are being monitored. According to the World Health Organization, people with mild illness recover in about two weeks, while those with more severe illness may take three to six weeks to recover. The virus has infected more than 150,000 people worldwide and killed over 5,600.

DeSantis has activated the National Guard and the state is purchasing 625,000 testing kits. Most in-person court proceedings have been suspended for two weeks, although judges can choose to conduct some by video or phone where legally allowed.

Publix, the state’s largest grocery store chain, announced that it would close its stores daily at 8 p.m. — three hours early for most. The company said that would give its employees more time to fully clean stores and restock shelves.

Walt Disney World, Universal Orlando Resort, SeaWorld and Busch Gardens have all announced they will be closed starting Monday. Disney said it will keep its hotels and its Disney Springs shopping area open, however. All major cruise ship lines have also suspended operations.