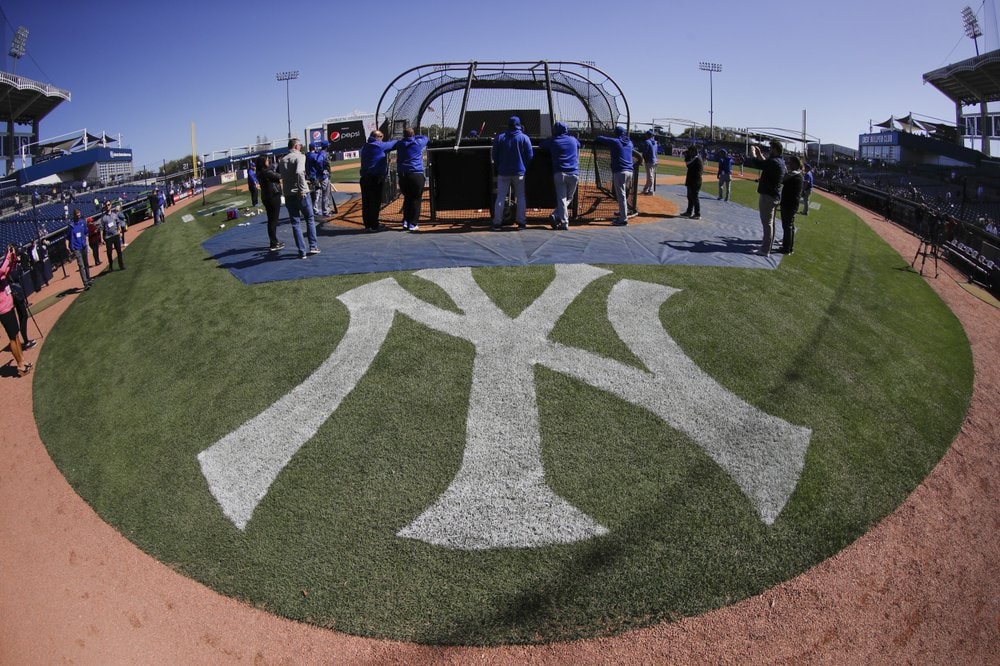 Opening day could be delayed into May or longer.

A New York Yankees minor leaguer tested positive for the coronavirus, the Miami Marlins shut their spring training complex and baseball began bracing for the possibility that opening day could be delayed into May or longer.

On Sunday night, the Centers for Disease Control and Prevention recommended gatherings of 50 people or more be canceled or postponed across the country for the next eight weeks. Major League Baseball planned to update teams Monday on its health policy.

On Sunday, a Yankees prospect became the first known player affiliated with MLB to contract COVID-19. Yankees general manager Brian Cashman said a “younger player” was affected in Tampa, Florida, without identifying him. Cashman said the player “feels much better” and his symptoms had subsided, but he was still isolated.

“He did not have any interactions with our major league players,” Cashman said on a conference call.

The moves by the Marlins and Rangers were team decisions, rather than something mandated by MLB. But there were indications that other camps wouldn’t stay open much longer in the wake of the virus, and more shutdowns could set off a chain reaction that would mean no real games for quite a while.

Asked what his biggest baseball concern was, Daniels responded, “I don’t really have one to be honest with you, my head’s not even there.”

“It might have been a few days ago, but it’s been pretty solely focused on making sure everyone’s got what they need, and everyone’s family is taken care of, and that we can get everybody home,” he said. “We’re going to have plenty of time to figure out the baseball piece.”

MLB called off the rest of the spring training schedule on Thursday and said opening day, which had been scheduled for March 26, was postponed for at least two weeks.

Teams and players agree that two to four weeks of additional spring training will be needed before the regular season begins. Given the time required to reopen camps, hold workouts and then get started, opening day appeared a long way off.

Yankees player representative Zack Britton said Friday the team had voted to remain together in Tampa and continue voluntary workouts.

“I’m sure the numbers are going to change,” Cashman said.

Cashman said he met with the major leaguers Sunday in light of the positive virus case at the minor league complex across the street from George M. Steinbrenner Field and the “players didn’t voice anything” as to their immediate plans. But he said as the players process the information, “I just suspect things are going to change.”

For most people, the new coronavirus causes only mild or moderate symptoms, such as fever and cough. For some, especially older adults and people with existing health problems, it can cause more severe illness, including pneumonia. The vast majority of people recover from the new virus within a few weeks.

MLB and the union recently had given players the option to stay at the site of their spring camp, return to their offseason homes or go to the club’s home city.

Cashman said the player was tested on Friday morning and the minor league complex was closed. He said the positive result was confirmed late Saturday night into early Sunday morning.

Cashman said no one else in the Yankees organization other than the affected minor leaguer had been tested for the virus.

The team said the unidentified player had spent his entire time at the minor league complex and hadn’t been over at the main stadium and facilities used by the major leaguers. Cashman said it was not known how or where the player contracted the virus.

The Yankees were on the east coast of Florida for an exhibition when MLB suspended the spring training schedule. Each day has seemingly brought new developments across the baseball landscape.

“Sunday is radically different than where we were Thursday,” Cashman said.

Miami’s big leaguers were told to take a break and avoid group activities. Some of the Marlins have homes near the spring training complex plan to stay there while others will go home.

Daniels said a bulk of the players from the Rangers’ camp had elected to go home. He said 15-20 players were headed to the Dallas-Fort Worth area, where they either have a primary residence or a place where they live during the regular season.

A charter plane was scheduled Monday for players to return to Texas, though some still elected to drive their own cars from the Arizona camp that is more than 1,000 miles from their new ballpark in Arlington, Texas.

Daniels said five or six players would be staying in Arizona, along with some staff members who have their offseason homes in the area. Other coaches were returning home to be with their families.