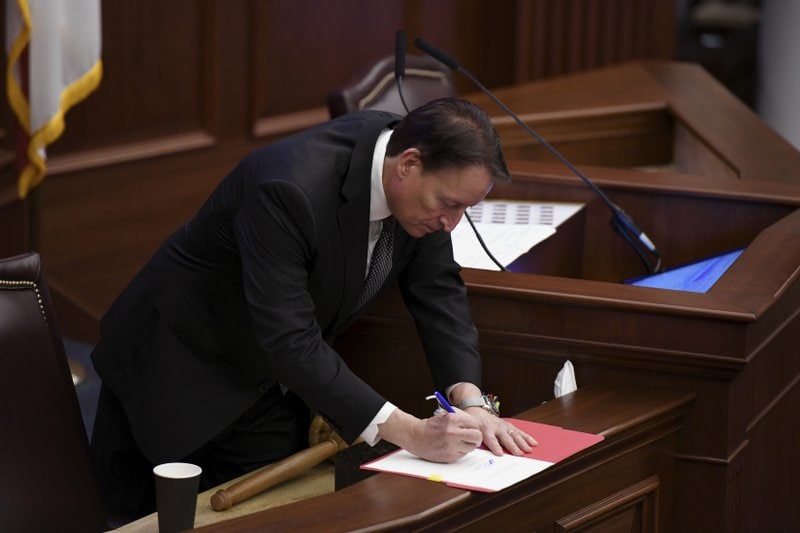 The Florida Legislature opened its annual session Jan. 14 with fanfare and optimism: Lawmakers’ desks were covered with flowers, Gov. Ron DeSantis and the House and Senate leaders delivered messages of hope for the future and there was a buzz of excitement in the air.

And there were a lot of hugs, cheek kissing and handshakes.

The session ended Thursday, six days later than scheduled, in an eerily quiet atmosphere. The Capitol plaza was virtually empty. Fear and uncertainty was in the air. Hugs were out of the question, and even handshakes were shunned.

But between the first day of hope and a last day dominated by questions of whether lawmakers will have to revisit the budget as the coronavirus devastates a state economy largely driven by tourism, lawmakers did pass about 200 bills on issues including abortion, the environment and even pelvic exams.

“It’s one of the most unique sine dies that I’ve attended since I’ve been in the legislative process, but it’s a sign of the times,” Senate President Bill Galvano said, using the Latin term for adjournment after lawmakers passed a $93.2 billion budget and ended the session, at least for the time being.

Galvano was first elected to the Legislature as a House member in 2002. He’s seen 16 sine dies as an elected official. Usually the end-of-session ceremony is attended by a throng of lobbyists, lawmakers, reporters and curious observers. This year, there were no crowds.

While coronavirus is definitely stealing attention away from other issues the state has dealt with, Galvano and other leaders took time to mention the other work they did between the time DeSantis gave his State of the State address and the final vote on the budget.

He pointed out a new law that will require girls under the age of 18 to get a parent’s consent before having an abortion, the expansion of a school voucher program and some of House Speaker Jose Oliva’s health care priorities, such as a bill allowing qualified advanced practice registered nurses to operate independent primary care practices.

Other bills passed during the session will require informed consent before pelvic exams can be performed on women who are under anesthesia for other procedures; seek to educate students and Floridians about a 1920 Election Day riot in which a white mob killed African Americans and burned their homes, and double fines and penalties for drivers who pass school buses that are picking up or dropping off children.

DeSantis noted that lawmakers successfully addressed his top priorities, such as providing money for water quality improvement projects and Everglades restoration; approving a bill to combat blue-green algae; passing legislation requiring employers to verify their employees are eligible to work in the United States; loosening state regulations on some professional licenses; and raising the average starting salary for teachers.

“We consider this a very, very successful session,” DeSantis said. “At the same time, we now are in a different world than we were just a few weeks ago, and we’re going to be looking to see how Florida is able to respond to the COVID-19. Obviously health and safety are paramount, but we already see this is going to cause economic dislocations.”

DeSantis’ comments were underscored moments later when, after the governor finished his laudatory remarks about legislative leaders, Oliva extended his hand only to be rebuffed — a clear response to concerns about people spreading the virus.

“I’m not going to shake your hand,” DeSantis said.

During a discussion about the governor’s leadership moments later, Oliva ended his remarks with a wry smile.

“It’s unfortunate that my last memory of him will be him leaving me hanging just a second ago,” he quipped.

nextPublix, Walmart plan thousands of hires to keep up with coronavirus demand