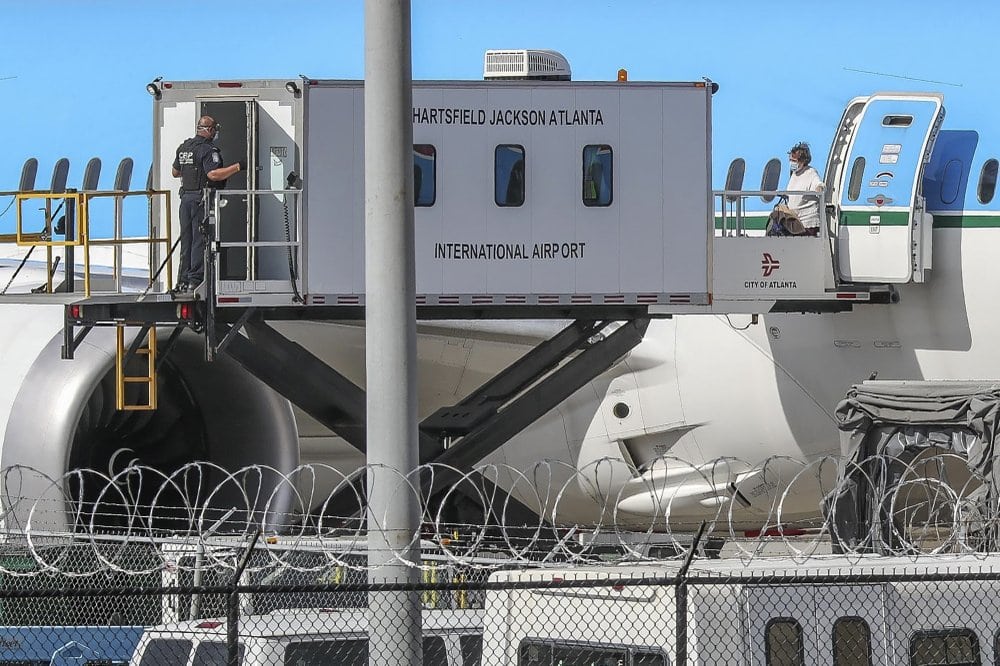 The flight was a culmination of a journey that began on March 5 in Fort Lauderdale.

On a chaotic flight home, some passengers who had been stranded for days aboard a cruise ship after being exposed to the coronavirus suffered breathing problems, many coughed and several fainted with no food or medical personnel provided, travelers said Friday.

“It was a suicide mission,” said passenger Jenny Harrell, of Fredericksburg, Virginia. “It was a mass triage with absolutely no direction and the crew going, ‘What should we do now?’”

Decisions were left up to the passengers, said Harrell, who had some emergency medical training in the past and helped a physician who was also among the passengers.

The jet carrying 359 people, including hundreds of American and Canadian passengers from a Costa Cruises ship flying home from France, landed at Atlanta’s international airport as emergency responders, and health and customs officials deployed to screen them for the coronavirus.

Three people on the flight tested positive for the coronavirus before landing but had no symptoms, the U.S. Department of Health and Human Services and the Centers for Disease Control and Prevention said. Thirteen others were sick but hadn’t been tested, and one passenger was sent to a hospital.

Harrell, 51, said she isolated two other passengers who were having breathing problems. One had a chronic lung disease and needed to be hooked to a ventilator, she said. Another passenger had an asthma attack and several others fainted, apparently from low blood sugar levels. Harrell said many travelers were coughing and she helped treat people who had a fever.

“There should have been medical personnel on that flight,” Harrell said.

Costa Luminosa passengers also complained they were given no food other than orange juice and crackers in more than 24 hours — the time it took to disembark in Marseille, France, to fly to Atlanta, and be cleared by officials.

At one point, Harrell said, the flight attendants handed her the cabin microphone.

“I basically took over the plane,” she said. “I couldn’t even make this up for a movie.”

In another instance, the co-pilot asked her and others whether they should land in Bermuda, instead of continuing all the way to Atlanta.

“We didn’t have a choice. We had been turned away for the last eight days,” Harrell said.

For many, the flight was a culmination of an already harrowing journey that began on March 5 in Fort Lauderdale. Some passengers said they wanted to cancel the trans-Atlantic cruise, but the company refused to give them a refund, assuring them it was safe to go three days before the U.S. State Department issued a warning for U.S. citizens not to travel on cruise ships.

On March 8, an Italian woman disembarked in Puerto Rico with breathing problems. She and her husband, who also got off the boat, were hospitalized and tested positive for the new coronavirus. Since the new cases came to light, the Costa Luminosa was denied entry to several countries.

The 1,400 passenger ship was finally allowed permission to dock in Marseille, France, under strict quarantine conditions. The local administration for the Marseille region said in a statement that 36 people have tested positive for the new virus.

The screening process for the passengers who got on the flight to the U.S. isn’t clear, but Harrell said many of the passengers were visibly sick when they boarded the jet.

“They just wanted us to get home so we could be taken care of here,” she said. “Everybody, basically, on that flight had medical conditions.”

After the plane landed, Harrell called 911 because CDC officials wanted to start screening, but she demanded food first. She was afraid they would have to wait for a long process before they had anything to eat.

The CDC said all passengers were screened and “three passengers who were reportedly tested previously and found to be positive for COVID-19 were separated from other passengers.” Federal officials are working with Georgia authorities to determine a plan for those passengers.

Harrell said officials measured their temperatures, but only certain passengers were tested for the virus. She was cleared to fly back home to Virginia, where she was told to stay home for 14 days.

previousWhat you need to know today about the virus outbreak

nextNational Spelling Bee called off because of coronavirus