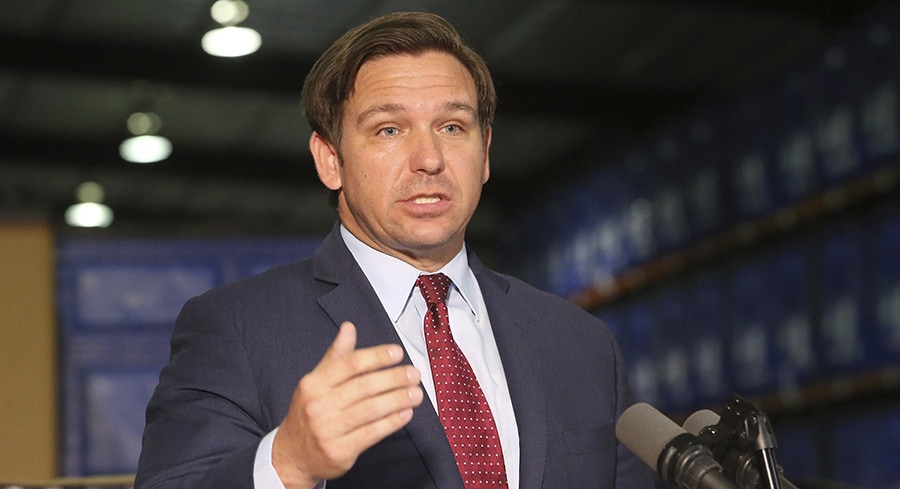 Violating the order would constitute a criminal offense.

Gov. Ron DeSantis issued an executive order Monday for travelers flying in from New York, New Jersey and Connecticut to stop the spread of the virus from one of the nation’s coronavirus hotspots.

Anyone traveling from the states will have to do a mandatory self-isolation for 14 days or the duration of their stay, the Governor said in a televised press conference. Violating the order would constitute a criminal offense.

“That’s the only way we can be sure that that virus is not going to be reintroduced in the state of Florida and then spread,””DeSantis said.

During the press conference, he mentioned New York and New Jersey as restricted traveler regions. But the executive order, which went into effect Tuesday morning, also included Connecticut to round out the tri-state area.

“It is actually a criminal offense if you violate the quarantine orders, so people can be held accountable here in the State of Florida if they buck the law,” DeSantis said.

Asked about the order at a news conference, New York City Mayor Bill de Blasio said “I understand it. We are the epicenter.” But he said he has mixed feelings about travel restrictions in general. “I’m not sure it’s the most enlightened approach.”

He noted that many Floridians have “deep, deep” ties to New York, saying, “I’m sure a lot of people in Florida are going to be put off by it.”

Miami, Fort Lauderdale and Palm Beach in particular have a close relationship with New York City, earning South Florida the nickname “The Sixth Borough” to complement Manhattan, the Bronx, Brooklyn, Queens and Staten Island. Many residents are transplants from that area — New York Yankee baseball games are even broadcast on local radio. This is the time of year many transplants’ families visit.

The move will be DeSantis’s latest step to combat the COVID-19 disease as the outbreak grows as he defends his decision not to order Floridians shelter in place.

“The minute you squeeze in one area, the water goes to the other part of the balloon.”

Over 190 direct flights still travel from the New York area to Florida daily.

“You have so many people working so hard, many people have sacrificed to try to protect our friends and neighbors, and I just think it would be unacceptable to continue to allow it — just simply coming in for people who are fleeing a shelter-in-place order in those states.”

Law enforcement will likely meet people on planes before they disembark and ask travelers screening questions and take their temperatures. People traveling would need to self-isolate, even away from family.

However, the order will not isolate people who take a road trip down from New York. DeSantis called the possibility not practical.

Earlier this month, a JetBlue passenger who was awaiting COVID-19 test results who flew to Orlando returned positive.

As of Monday evening, more than 1,200 people have been diagnosed with COVID-19 in Florida and 17 have died, an increase of three since Sunday.

State officials did not immediately return calls Monday evening seeking information on how many of those diagnosed in Florida recently arrived or returned from New York or had contact with someone who did.

DeSantis also said Monday he wants to avoid imposing a statewide lockdown like California, New York and other states have done, saying he still believes targeting the counties hardest hit by the virus for the most extreme measures is preferable.

Reporting from the Associated Press was used in this report.