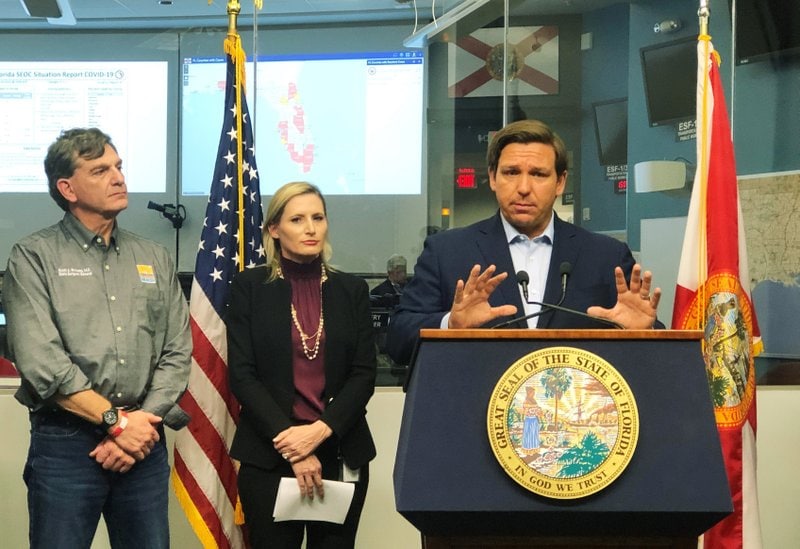 Anyone who has traveled from New York in the past three weeks will have to self-isolate.

Anyone who has traveled from the New York City area in the past three weeks will need to self-isolate, the Governor said Tuesday. Additionally, they must notify officials of people they’ve had contact with since arriving and alert those people as well.

DeSantis noted the virus could have been circulating in the nation’s biggest city for the past three or four weeks and infecting unwitting individuals.

“That obviously is a big problem because that’s the epicenter of the COVID-19 outbreak in the entire world right now,” he said during a televised press conference from the Governor’s Mansion.

Tuesday’s order doubles down on a decision Monday to isolate anyone who arrives in Florida on planes from New York, New Jersey and Connecticut. DeSantis said violating the order would constitute a second-degree misdemeanor punishable by 60 days in jail and a $500 fine, but that he expected most to voluntarily comply.

“That’s the only way we can be sure that that virus is not going to be reintroduced in the state of Florida and then spread,” DeSantis said during a televised press conference Tuesday.

With extensive travel between the nation’s biggest city and particularly Florida during this time of year, DeSantis feared New Yorkers should adhere to those shelter-in-place orders even though Florida has not issued its own.

“Those are the folks who should be staying in home and sheltering in place,” he said. “Instead, they’re seeding in different communities throughout the United States, including here in Florida.”

Miami, Fort Lauderdale and Palm Beach in particular have a close relationship with New York City, earning South Florida the nickname “The Sixth Borough” to complement Manhattan, the Bronx, Brooklyn, Queens and Staten Island. Many residents are transplants from that area — New York Yankee baseball games are even broadcast on local radio.

“Like Governor DeSantis has put out today, everybody who was in New York should be self-quarantining for the next 14 days to ensure that the virus doesn’t spread to others, no matter where they have gone, whether it’s Florida, North Carolina or out to far reaches of Long Island,” she said.

The Governor also said he wants people aged 65 and older and people with serious medical conditions to stay home for the next two weeks. A second executive order Tuesday outlined

“Folks who are 65-plus are the ones that have the best chance to suffer a negative outcome, and that’s disproportionately so when you talk about fatalities.” he said. “We want to make sure those folks are protected.”

The National Guard has been stationed at major airports to help airport personnel facilitate screenings and take temperatures of travelers flying in from restricted regions. Travelers must also report the residence they will be self isolating — and it cannot be with family.

That information will be shared with local communities to keep an eye on those who have been isolated.

DeSantis expects to expand that guardsmen’s aid to smaller airports in the coming days.

Asked about Monday’s order at a news conference, New York City Mayor Bill de Blasio said “I understand it. We are the epicenter.” But he said he has mixed feelings about travel restrictions in general. “I’m not sure it’s the most enlightened approach.”

Florida now has more than 1,400 cases of the novel coronavirus after the latest update from the Department of Health Tuesday morning.