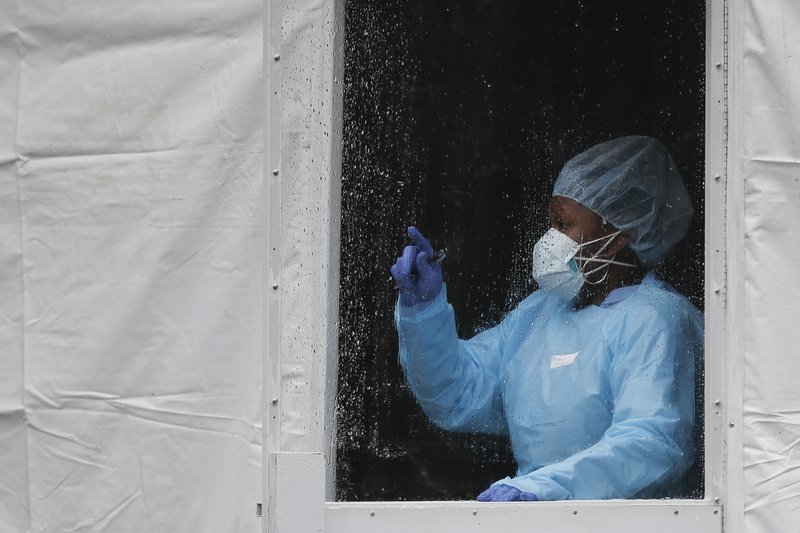 A “cacophony of coughing” in packed emergency rooms. Beds squeezed in wherever there is space. Overworked, sleep-deprived doctors and nurses rationed to one face mask a day and wracked by worry about a dwindling number of available ventilators.

Such is the reality inside New York City’s hospitals, which have become the war-zone-like epicenter of the nation’s coronavirus crisis.

Faced with an infection rate that is five times that of the rest of the country, health workers are putting themselves at risk to fight a tide of sickness that’s getting worse by the day amid a shortage of needed supplies and promises of help from the federal government that have yet to fully materialize.

“You’re on 100% of the time — no matter what,” said Dr. Jolion McGreevy, medical director of The Mount Sinai Hospital emergency department. “It’s been a month of full force, and that’s certainly very stressful.”

Patients initially showed up with fairly mild symptoms, ranging from a runny nose to a mild fever, concerned they contracted coronavirus. That shifted over the past week, McGreevy said, and now hospitals are receiving far sicker patients in need of life-saving intervention.

“These are people in severe respiratory distress, needing to be intubated and needing the intensive care unit,” he said. “We knew it was coming. We saw it in Italy and other places so we were prepared for it, and now we’re seeing it.”

Columbia University chief surgeon Dr. Craig Smith wrote in a note to colleagues: “To think we could mimic Italy seemed risible a week ago. Not today.”

Nearly 14,800 people in New York City have been diagnosed with coronavirus as of Tuesday, accounting for more than half the cases in the hardest-hit state in the nation.

More than 2,200 people in the city were hospitalized because of the virus — double the figure from three days earlier — and more than 500 were being treated in intensive care. The death toll rose to 131, and officials from the Governor on down warn it will get worse before it gets better.

“We are not slowing it. And it is accelerating on its own,” said Gov. Andrew Cuomo, warning the state could be as close as two weeks away from a crisis that sees 40,000 people in intensive care. Such a surge would overwhelm hospitals, which now have just 3,000 intensive care unit beds statewide.

“One of the forecasters said we were looking at a freight train coming across the country. We’re now looking at a bullet train,” he said.

Bristling at President Donald Trump’s notion that Americans should be prepared to go back to work in as little as a week for the sake of the economy, Cuomo said that would essentially sacrifice the lives of the elderly and the most frail among us. “That’s not the American way,” he said. “That’s not the New York way.”

And Cuomo appeared to mock the federal government for congratulating itself for sending the city 400 desperately needed ventilators from the national stockpile.

Khalid Amin, a doctor at Methodist Hospital in Brooklyn, treated seven COVID-19 patients on Tuesday, ranging from 25 to 72, and he is struck by the way the disease has laid each low in the same way — the fatigue, the way they grasp for air with the slightest movement.

One patient in his 50s, moving from the bathroom to his bed, a space of less than 12 feet, seemed to struggle at one point, his chest rising and falling rapidly.

“You seem short of breath?” Amin asked. Then came the reply, so low, Amin could barely hear him though he was inches away. “Yes.”

Moments later, a stethoscope on the patient’s back, Amin heard the same telltale sound he had been hearing in other patients that day: “It’s a crackle, like crumpling paper.”

Dr. Craig Spencer, who survived a bout of Ebola in 2014 and now is director of global health in emergency medicine at New York-Presbyterian/Columbia University Medical Center, tweeted Tuesday of a “cacophony of coughing” in the ER, saying nearly every patient he encounters has the same symptoms, regardless of age: Cough, shortness of breath and fever.

“You’re afraid to take off the mask,” he wrote. “It’s the only thing that protects you.”

Smith said hospitals in the New York-Presbyterian system are burning through about 40,000 masks a day amid the crisis — about 10 times the normal amount — and have begun issuing staff members just one each day.

Mayor Bill De Blasio said about 2.2 million masks were delivered to hospitals Monday, with additional supplies en route from the state and federal governments. But he said there would have to be a lot more where that came from.

“If we run out of it, it’s like sending a soldier into war where everyone else has armor and we don’t have armor,” said Dr. Joseph Habboushe, an emergency room physician at NYU Langone Medical Center.

The city’s health department last week advised health professionals to continue working after exposure — rather than self-quarantining — unless they show symptoms.

“The more we hear about doctors and nurses getting sick, the more we get nervous,” said Dr. Eric Cioe-Pena, director of global health at Northwell Health. “It’s definitely on the mind of every health care worker in America. We don’t want to be in a position where we’re making decisions based on resources rather than the clinical care of patients.”

Cioe-Pena has been following what he calls a “decontamination routine” after every shift, in which he wipes down his phone and washes both his scrubs and street clothes.

“We’ve ventured into a battle,” he said.

Across the city, health care workers, hospital administrators and public officials were scrambling to preserve precious gear and find more treatment space before they were overwhelmed. The Jacob K. Javits Convention Center was being converted into a 1,000-bed hospital, and a fully staffed and equipped Naval hospital ship, the USNS Comfort, was expected to arrive within two weeks to provide another 1,000 beds, not for coronavirus patients but to provide relief to hospitals dealing with them.

NYU Langone’s Habboushe said that while ER physicians deal with potential danger all the time, there’s concern about what’s to come with the coronavirus. While the vast majority recover from the illness, older adults and people with existing health problems are particularly vulnerable and could suffer more severe illness or even death.

“Taking care of this disease that we still don’t have our heads around, we’re not sure if any medications help, we’re not sure why it affects some people more than others,” he said.

“The anxiety and stress that I think all of us in society are feeling right now — we are feeling it all the more so in the hospital. How can we deal with the idea that this is going to be worse and worse before it gets better?”

Among the biggest looming concerns, Habboushe said, is the prospect of medical professionals having to decide which patients get the potentially life-saving machines such as ventilators and which do not.

“It’s one of those things you learn about. It’s hard to imagine you actually would face that,” he said. “And now we’re all realizing there’s a really high chance we’ll be facing that, and that breaks my heart.”