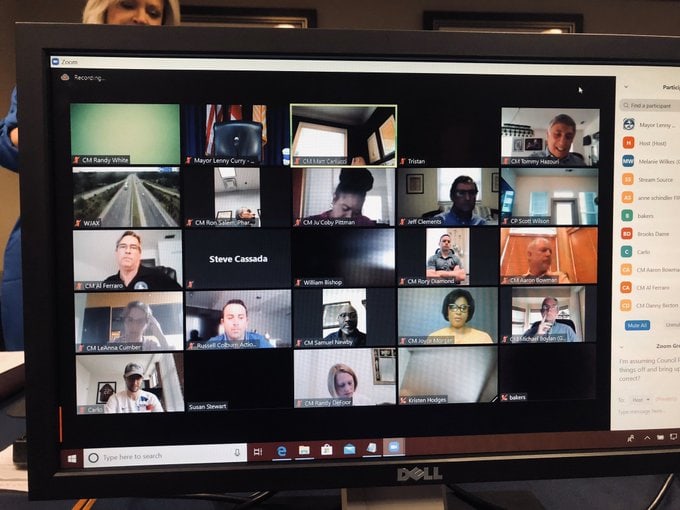 With Duval County residents largely mandated to work from home during the coronavirus outbreak, the Jacksonville City Council led by example.

A Tuesday morning Zoom meeting addressed the consolidated city’s response to COVID-19, which has taken four lives of the over 150 diagnosed with the disease.

The big news: Curry teased more details on a partnership between the city and VyStar, a $20-30 million program to help small businesses with grants, interest payments, and help with principal on loans.

A goal of this initiative: “employee retention.”

“Some are out of work,” Curry said, noting other recovery resources already announced, including grants for displaced bartenders.

Asked about budget issues by Councilman Garrett Dennis, who noted the high burn rate of local government starved of revenue, Curry noted that while finances “are incredibly strong,” “this is going to be a long hard road financially.”

“Life has changed. It’s a completely different day. The things we were talking about a month ago, everything needs to be reevaluated,” Curry said.

“Tough budgets” to come will attempt to restore “normalcy” to the lives of those who are and will be “hurting,” Curry said.

Emergency legislation will be approved by the Jacksonville City Council next month to move these funds through.

“We’ll come out of this,” Curry said. “But we have to face the reality we’re in.”

That reality is one of economic desolation, at least for the moment. And like so many budget hawk Republicans, Curry, who ran as a fiscal conservative, will functionally expand the government as the private sector wilts.

Disease marches on: Curry noted the 163 positive cases in Duval County, with 3,681 tested between the Lot J federal site and the city site at the Prime Osborn Convention Center.

The Mayor noted delay in tests: “these labs are incredibly inundated,” Curry said, “with tests locally, through the region, and throughout the country.”

“If you could test everybody, you would. But it’s just not possible,” Curry said. “If we had the testing kits … could turnaround in labs, we would do it.”

Councilman Sam Newby, who contracted the virus, noted that he’d seen the doctor five times before the test. All he displayed was stomach symptoms.

“If you have any flu-like symptoms at this point,” Curry said, “just isolate yourself.”

Curry noted that the Jacksonville Sheriff’s Office broke up “block parties” this weekend, urging those who “see something” akin to too much physical proximity to report it to law enforcement’s non-emergency number.

When does it peak? Asked to estimate the peak of the virus by Councilman Matt Carlucci, Curry said local hospital leaders expect “late-April, early-May.”

Orders to “keep people safe and flatten the curve” will be in place at least through then, the Mayor added.

One metric to watch: bed availability at hospitals, which is “pretty normal” at this point, with a field hospital at the ready.

“We need to get through this period now, and figure out as a country what our day to day interactions … will look like,” Curry said, noting that it will be “different.”

Curry has ordered a shutdown of hotels to non-essential personnel, and spoke favorably of the actions of Gov. Ron DeSantis, including interstate checkpoints to ward off people from hotspots, including Louisiana, New York, New Jersey, and Connecticut.

Regarding a “safer at home” order under consideration, mirroring what the Governor ordered in South Florida, Curry noted that the aggregation of what Duval County has done satisfies most of its conditions.