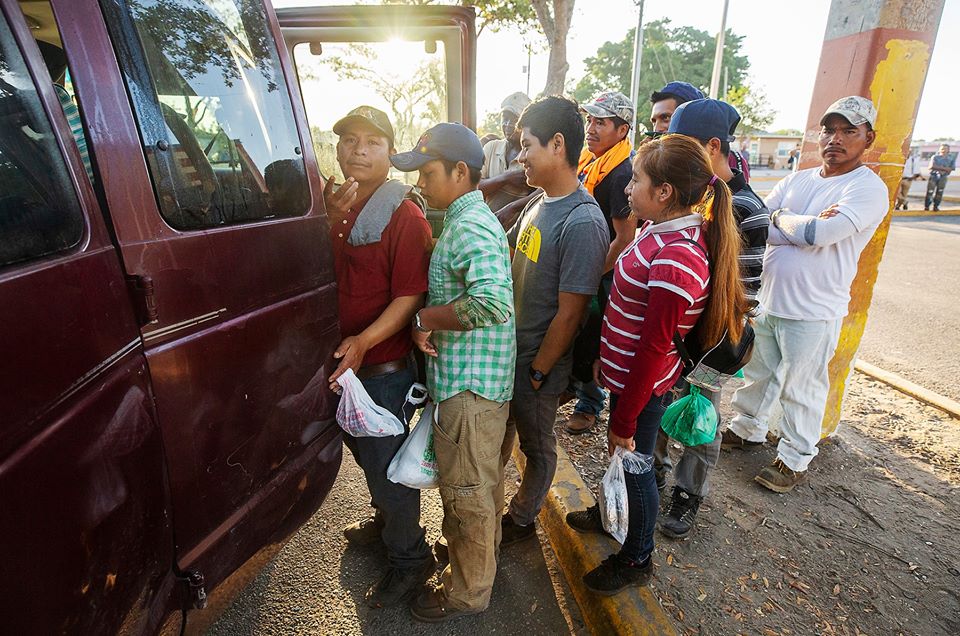 Social distancing and frequent handwashing not happening in migrant camps.

In a time when hardware stores requires guests stay yards apart in the checkout line, the images are startling.

Day laborers from Immokalee crowd into the back of a van to head to farms still in picking crops. Workers crowd around a sink to wash their hands, but without soap to disinfect germs— or stop the spread of coronavirus.

It’s why Rep. Heather Fitzenhagen, a candidate for Congress, has started a fundraising effort to address public health concerns in an oft-ignored population. A GoFundMe page set up by Fitzenhagen looks to raise at least $1,500 for the purpose of buying toilet paper, hand soap, food, diapers, paper towels and simple hygiene products into the worker camps.

“These are people struggling to get their basic needs met,” said the Fort Myers Republican.

Fitzenhagen said she became aware of the specific challenges facing the Immokalee Farmworkers earlier this week. That’s when photographer Kinfay Moroti called her up while driving from Immokalee to Fort Myers struck by what he had seen,

Moroti, a former photographer for the USA Today Network, provides journalistic photo and documentary video for regional nonprofits through his company, hopeful images. As he saw the coronavirus pandemic impacting every sector of life in Southwest Florida, he decided to see what was happening with migrant workers.

“I’ve been documenting the COVID-19 crisis here in Southwest Florida,” he said. “Immokalee is a very underserved community when there is no crisis, so I knew if I go out there, there’s an opportunity to do that.”

Indeed, what he saw was both familiar and shocking at once. Day laborers still congregate in mornings to be packed into vans and pickup trucks, regardless of social distancing guidelines. But there’s fewer employers, and thus less money, coming into the impoverished community. But beyond that, the workers who do get jobs work early hours, and they can’t get into grocery stores early when soaps and hygiene products get stocked and quickly sold.

And price gouging on those products, a problem state officials see statewide, happens in Immokalee as well but impacts a population that’s poor and unlikely to reach out to the government for help.

Moroti looked to his personal network to publicize the problem. He worked with media personality Brittany Gonzalez at 105.5 The Beat in Fort Myers, who has highlighted the community’s challenges on the radio.

And he spoke to Fitzenhagen, who he knows from their shared work in the nonprofit world.

The lawmaker saw a reason to get involved for a variety of reasons.

“Stores raised prices to something they couldn’t afford in Immokalee, and the people there can’t get to another store,” Fitzenhagen said.

But there’s other public health challenges as well.

“There’s no testing center there at all,” she said, “and it wouldn’t help if there were because you need a doctor’s prescription to be tested.”

The potential of an infection striking the migrant population would be devastating. Individuals live and work in close proximity, in largely unsanitary conditions, and many will only go to the hospital in a life-threatening situation.

Notably, it’s this situation that prompted some advocacy groups to sound alarms when the Florida Legislature passed E-Verify legislation this year. Fitzenhagen co-introduced that bill in the House. But she consistently argued the legislation could address problems like sex trafficking that impact populations of undocumented workers.

“I stand by that we need immigration reviewed at the federal level, and I stand by the E-Verify legislation we passed.”

But she also sees a humanitarian crisis in Immokalee that demands immediate attention.

These folks are still working hard to get food and vegetables in our stores,” Fitzenhagen said. “The fact they don’t have soap to wash their hands and face, there’s just a lot of suffering right now.”

Jacob Ogles has covered politics in Florida since 2000 for regional outlets including SRQ Magazine in Sarasota, The News-Press in Fort Myers and The Daily Commercial in Leesburg. His work has appeared nationally in The Advocate, Wired and other publications. Events like SRQ’s Where The Votes Are workshops made Ogles one of Southwest Florida’s most respected political analysts, and outlets like WWSB ABC 7 and WSRQ Sarasota have featured his insights. He can be reached at jac[email protected]