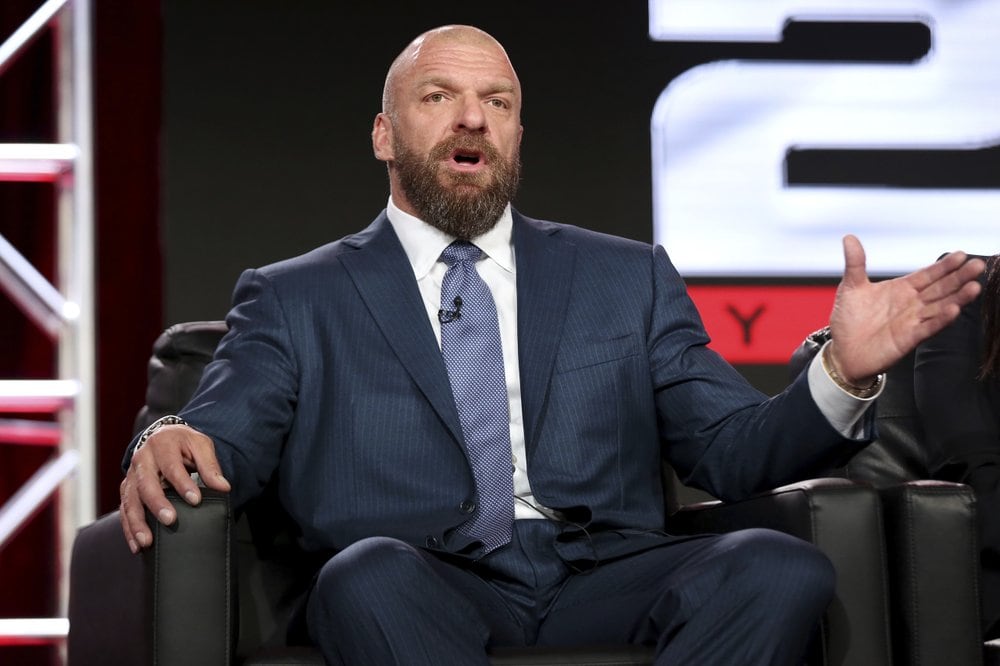 WWE also spread the card for the first time in WrestleMania history over Saturday and Sunday.

Rob Gronkowski is set to host WWE’s signature show. But the frivolity — and perhaps the physicality if a wrestler dare gets in the retired New England Patriots star’s face — is now playing strictly to an audience of TV and streaming media viewers.

For WrestleMania ticket-buying fans, that’s as unwelcome as a steel chair to the back.

While real sports have shut down because of the coronavirus pandemic, WWE has pressed on and continued to produce programming three nights a week for “Raw,” “NXT” and “Smackdown.”

The shows have featured a mix of classic matches, interviews and even empty-arena matches. Those thuds — like Montez Ford’s brutal botched bump to the floor this week on “Raw” — are heard quite clearly without crowd noise to drown out the in-ring action.

WrestleMania has run in front of massive crowds inside football stadiums every year since 2007, and Sunday’s show was set to take place at the home of the Tampa Bay Buccaneers. WWE stood firm that the show must go on and largely moved a card highlighted by stars Brock Lesnar and John Cena to its performance center in Orlando, Florida.

WWE also spread the card for the first time in WrestleMania over Saturday and Sunday to make room for roughly 16 matches and hit up fans for two times the pay-per-view price.

“It’s really difficult to do, even without fans, in a safe and effective manner. For us, it was trying to continue to try and put on the product and do it as safely as possible, and we feel like we’ve been able to do that.”

Levesque said most of WrestleMania has been taped, though there are “live components” to the two-day show.

The card has been besieged by rumors of major match shake-ups, notably the apparent removal of top star Roman Reigns, who disclosed in October 2018 his leukemia had returned. Reigns was scheduled to face Bill Goldberg but declined on an Instagram video to get into details of his withdrawal.

“The moment I make a choice for me and my family, I’m a coward,” he asked.

Levesque said there were “no ramifications” for any performer, staff or crew who declined to participate in WrestleMania or other events. He added no performer to his knowledge has tested positive for the virus and the company has adhered to social gathering and CDC guidelines.

There’s nothing socially distanced, though, between two men fighting in a Boneyard Match or a Firefly Funhouse Match,though the special attraction bouts are two ways WWE strayed from the drab empty arena set.

“I think a lot of these things might give us unique opportunities in the future to do some things at WrestleMania and beyond that kind of change the business,” Levesque said.

WWE announcer Jerry “The King” Lawler called the first “Raw” without fans on March 16 and it reminded him of his own empty arena bout against Terry Funk in 1981.

“I can tell you from experience, even though I knew what it was all about, and how the match was built up, when I actually wrestled him, I felt stupid,” Lawler said, laughing. “But later on, when you watch it on TV, it was good.”

Drew McIntyre won the Royal Rumble in January at a packed Minute Maid Park in Houston to earn a shot against Lesnar for the WWE championship at WrestleMania What should have been a crowning moment in front of 75,000 fans — now just refunded tickets —could be a letdown.

“I really can’t believe WrestleMania is happening in these times,” McIntyre said. “It’s not how I pictured it when I was a kid, or over the past few years or even a couple of months ago.”

WWE, propped by billion-dollar TV deals and lucrative deals with Saudi Arabia, is surely shaking its head at the sudden downturn.

This week’s “Raw” sunk to a decidedly low 1.92 million viewers, yet enough to rank in the top five of cable rankings for the night.

“My initial disappointment and rage turned into, wait a minute, that’s a very selfish way of looking at it,” McIntyre said. “People are sitting in right now and need something right now. WWE is providing it to them.”

Perhaps not for long. Florida issued a statewide stay-at-home order Wednesday that could put WWE down for the three count when it comes to future TV tapings.

“We can do so many different things and really get outside the box on stuff,” Levesque said. “If there’s a way for us to do it, we’ll continue for as long as we possibly can.”

So strike up the theme music, ignite the pyrotechnics and let the sounds from the sofa serve as the soundtrack for this year’s show.

“WrestleMania won’t be the spectacle that it would have been,” Levesque said, “but it will be a spectacle nonetheless.”