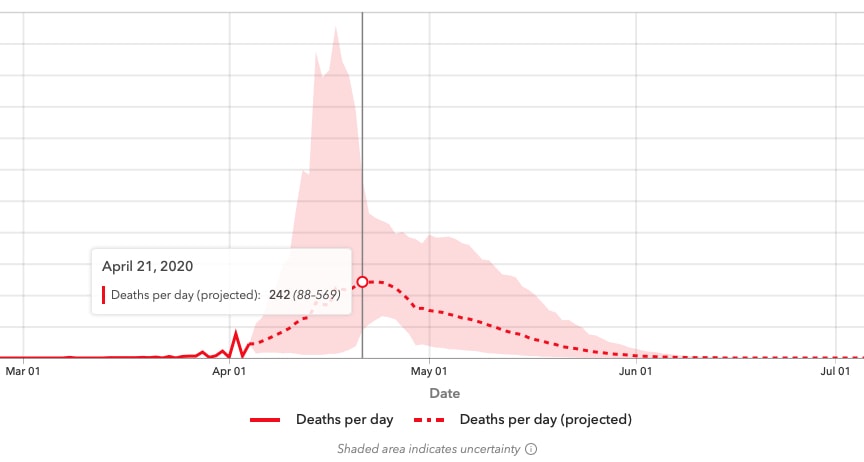 Just as deadly in long run. Much deadlier at crunchtime, now seen as April 21.

Editor’s note: This model has since been revised. Florida Politics latest coverage is available here.

A University of Washington coronavirus pandemic model that has become widely influential in projecting states’ crisis levels has been revised to call for a much sooner peak in Florida, with the worst now expected around April 21.

That’s a full 12 days sooner than the previous projection put out last week by The Institute for Health Metrics and Evaluation, an independent population health research center at UW Medicine.

The model now predicts a higher peak but shorter peak time for Florida. The revision appears based on new data, and on the institute’s assessment that Florida has not done enough to “flatten the curve” of coronavirus contagion, and so must expect a sooner yet sharper rise, now heading toward a peak over the next 15 days.

The model predicts that Florida’s crisis will be no less deadly, just more concentrated.

The institute had previously developed projections with the anticipation that Florida would fully shut down by late March, but Gov. Ron DeSantis did not issue his stay-at-home order to take effect until last Friday.

By April 21 the Sunshine State could be seeing 242 people dying per day of COVID-19. And when it is all over by late summer the state’s death toll could reach 6,770, according to the institutes’ latest projections.

The institute’s previous run of projections, as reported on March 31, estimated Florida should peak around May 3 with 174 deaths per day from the disease, yet still run out to 6,766 total deaths from COVID-19 by the end of the summer.

The new projections represent just the most likely scenario. The institute works with a wide range of uncertainty that could mean things are either much better or much worse than its line of most-likely projections. And the area of possibility the institute depicts for Florida now is much higher and spikier than its previously-reported projections.

The institute’s projections model also that Florida’s need for hospital beds and intensive care unit beds also will peak around April 21, also moved forward from a previous expectation that the worst would come on May 3.

The overall picture for hospital bed and ICU bed needs are not significantly different from the earlier projections. The institute still concludes Florida would have adequate hospital beds, projecting a peak need for about 13,000, while about 20,000 should be available. The institute concludes Florida would not have enough ICU beds however, with the need peaking at about 2,500, while only about 1,700 would be available on April 21.

At the worst, Florida would need 2,095 ventilators, the institute projects.

Once again, those are the projections that occur along the institute’s most-likely scenario line, and the range of uncertainty is much higher and much lower. And, as with the deaths projections, the worst case scenario spikes far higher than it did previously, when the institute was predicting a longer, flatter curve.

The revised projection comes as Florida coronavirus cases continue to jump by 1,000-plus daily and the death count jumps by double-digits in the Department of Health.

Between DOH’s Sunday evening and Monday morning reports, another 974 cases were reported, for a total of 13,324 statewide. In the same timeframe, deaths attributed to COVID-19 rose by 15. As of Monday morning, 236 Floridians have died in the outbreak.

nextJeff Kottkamp: Now is not to time to second guess the Governor