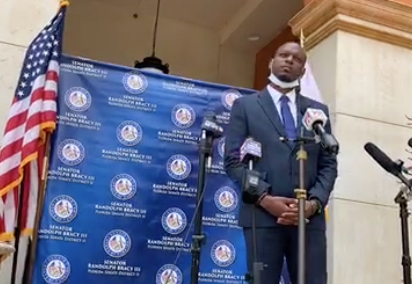 However, Senate President Bill Galvano replies late Wednesday: Not at this time.

Democratic Sen. Randolph Bracy on Wednesday called on State Legislature leaders to consider a special session to increase the amount and duration of Florida’s unemployment compensation during the coronavirus crisis.

Speaking from his district office in Ocoee, Bracy said the $275 in state unemployment benefits currently offered is way too low for a family to live on, and the 12 weeks of benefits far too short given the economic collapse Florida is seeing due to the coronavirus crisis shutdown.]

It is not likely to be addressed in a special session, however, Late Wednesday, Senate President Bill Galvano replied that while he shares Bracy’s concerns for the longterm, he believes the federal aid coming workers’ way should help for the moment and so a special session probably is not a good means to address it.

Bracy also expressed frustration that the state’s unemployment compensation system essentially is broken and untold numbers of unemployed Floridians have been unable to apply. But he expressed faith in Gov Ron DeSantis’s vow to get that fixed and confidence in Florida Department of Employment Opportunity Director Ken Lawson to find ways to make it work.

Nevertheless, he said his district office has been receiving calls nonstop every day from constituents seeking help in filing claims.

The deeper issue, Bracy maintained, is that even if the system works, it’s inadequate to help Floridians get by in the economic hard times now upon Florida and the nation.

Record numbers of Floridians are filing for unemployment, and hundreds of thousands more are expected to do so.

Bracy said he spoke to Senate Galvano and President-designate Wilton Simpson Wednesday. He also wrote to Galvano and House Speaker Jose Oliva urging them to consider raising and extending the compensation during a special session this spring.

Calls also have come in from other Democrats for Florida to improve and increase its unemployment compensation system.

Galvano’s response in a reply letter he sent Bracy late Wednesday said, in part, “While the amount and length of benefits under normal circumstances may merit revisiting in the future, with the added benefits available under the CARES Act, I do not believe a special session is warranted at this time.”

DeSantis assured Floridians on Monday that the system is working, but his declaration was followed Tuesday by scenes of hundreds of people waiting in line to obtain paper applications.

If unemployed Floridians are approved for the state unemployment compensation, they also become eligible for an additional $600 a week for four weeks through the federal Coronavirus Aid, Relief, and Economic Security Act that Congress approved last moth.

“My point is, we have a systematic problem with our unemployment system. If it wasn’t for the federal government, how would people in this economy now be able to survive on $275 for only 12 weeks?” Bracy pressed.

Bracy said Galvano told him he is considering a Special Session, mainly to address how Florida will process federal programs authorized in the CARES Act. But Bracy said that Galvano said he wants to wait at least a couple of weeks to decide, to see if the coronavirus pandemic subsides in Florida.

“I would like to see it as soon as possible,” Bracy said. “I believe at some point in a month or two we will have a special session.”

nextFeds eye loosening rules to allow some to return to work