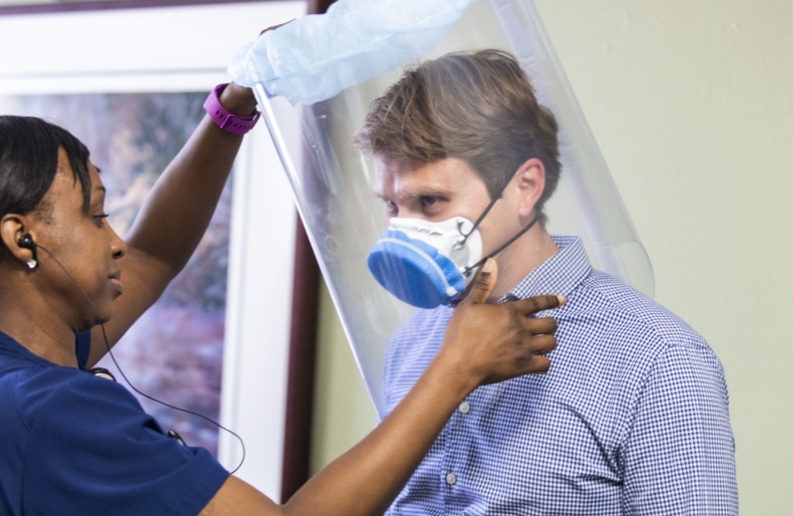 The University of Central Florida, the Orlando Health hospital system, and the Stratasys 3D printing company have partnered to begin producing health workers’ personal protection equipment for the fight against the COVID-19 pandemic.

Researchers at UCF’s Prototype Development and 3D Print Lab have created new designs for use in state-of-the-art, continuous build 3D printers that allow medical shields, and eventually multi-sized respirator masks, to be rapidly produced, up to as many as 1,500 a day, the university announced Thursday.

While UCF created the designs, the face shield production is carried out by Stratasys at other locations and then items are shipped to hospitals nationwide. Stratasys also is sharing its face shield designs online for others to replicate.

The first shipment of 600 3D-printed shields arrived this week and were assembled onsite at Orlando Health to stock up their supplies.

Central Florida hospitals and first responders maintain they currently have enough PPE but cautiously seek to stock up for a surge in cases they expect to peak in late April or early May.

“While we don’t currently have a shortage at Orlando Health, hospitals need to have backup plans if crucial supplies run low or run out at some point,” Michael Schmidt, Orlando Health’s managing director for strategic innovations stated in a news release issued by UCF. “Our goal is to contribute to the collaborative dynamic taking place right now around the world and offer one possible solution to protect healthcare workers in the near term until suppliers can shore up the shortages.”

The University of Tampa is also using its 3D printers to make shields for health care workers in the Tampa Bay area.